Month 3 Catchup
Before I get into all the fun month 4 stuff, since I hadn't finished month 3 in time I thought I would include some photos of my month 3 model Nekima here now that she is completed. Nekima ended up being a very long process but I am quite happy with the results. Went for Grey skin like Lilitu and gave her Red Clothes and Blue wings (keeping with the Grey,blue,red colours used on Lilitu/Lelu, my only other painted Nephilim) Also tried putting a gloss coat on the sword to see if I liked the shine (it's fairly subtle but I think it adds a little bit. This was my first attempt at proper blonde hair and it ended up being a bit more yellow than I'd planned. Since it isn't on a human though it's not a big deal. Nekima has been a blast to play even though I haven't come anywhere near to getting her rolling at peak effectiveness yet. It is great to get her up to min damage 6 from the Nurse and watch her attack 4 times in a turn (3 in her activation, once from obey). Will definitely be trying to get some more playing time as the competitive community seems split on how great she is. 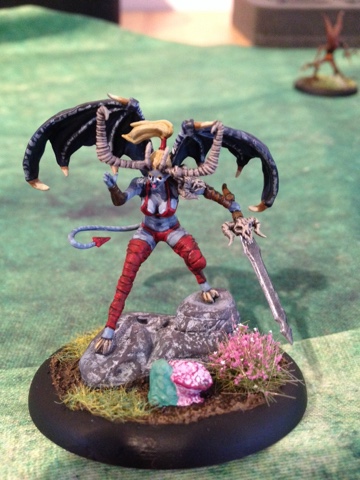 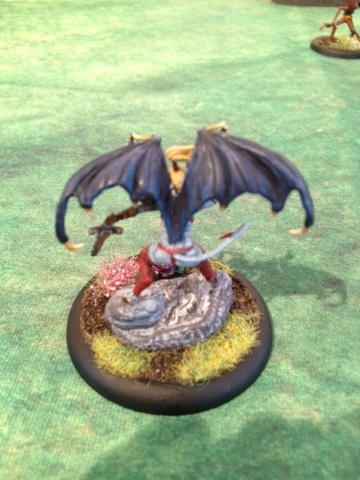 Hobby:
I rolled over £5.50 from month 2 and Nekima costed me $25 from Black Friday sale which equals about £17 at the moment. This leaves me with £3.50, giving me £18.50 for month 4. Some more cheating/subdividing going on in this month (sorry!) due to having picked up a few models without necessarily having/needing the whole box. I ended up deciding against adding a performer largely due to the fact that it would make too much of my crew focused on Voodoo doll tricks, which would make it easier to counter. Instead I decided I could use another option for a beater model (other than Nekima), some cheaper scheme runners, and a great utility piece in the beckoner.

First model up for Month 4 pictures is the Beckoner. This was the second time (the Nurse being the first) I tried to go for the semi-transparent white stockings. Sadly the Beckoner was proving very difficult to photograph so they look far less shear than they are in reality. Not very happy with the Brilliance (purple) eyes I gave her, may want to take another shot at that some time. Other than that I'm quite happy how she turned out. I especially like the dirty-blonde die job she has. Your roots are showing! 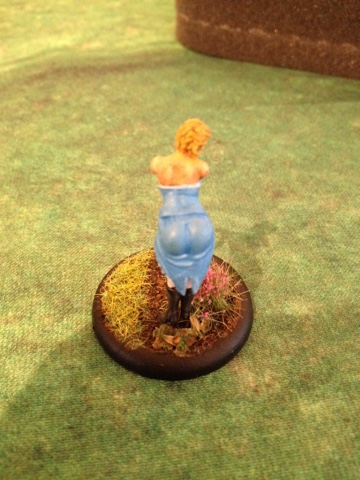 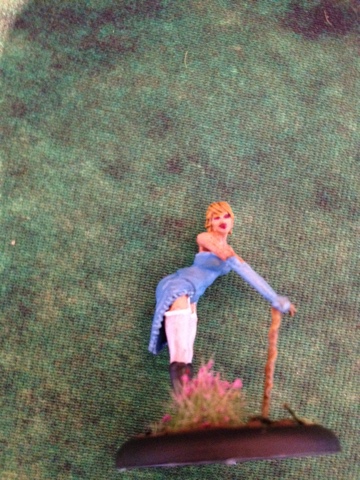 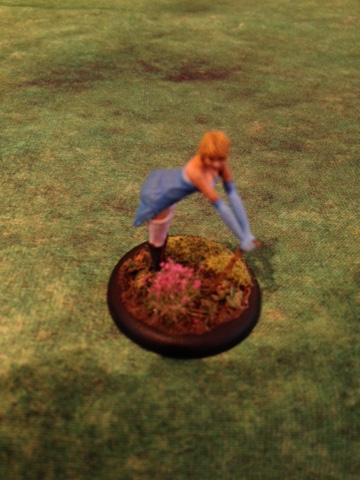 Next up are my pair of terror tots. I was looking for a good dark red on twitter the other day and one of the respondents suggest Vallejo black-red. Loved using this paint. Makes a great base-coat and mixed it with some GW mephiston red paint (maybe my single favourite paint to use) to highlight up the little guys. They were a pretty quick/simple paint job since they are mostly skin. Still think I need some work on painting metal, but quite happy with them overall. Also the photo below is probably the best photo yet of any of my water effects. 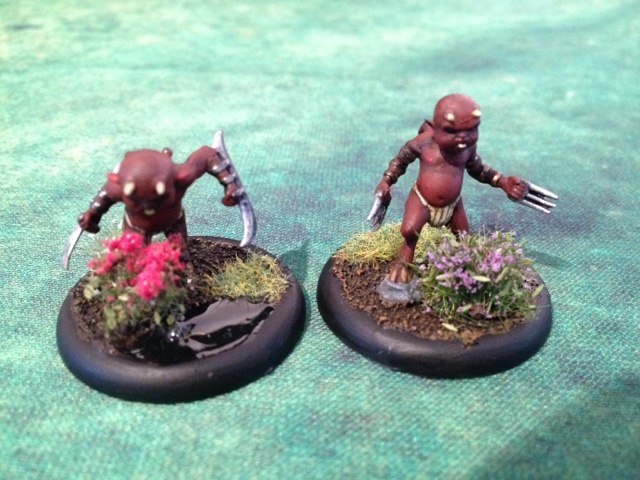 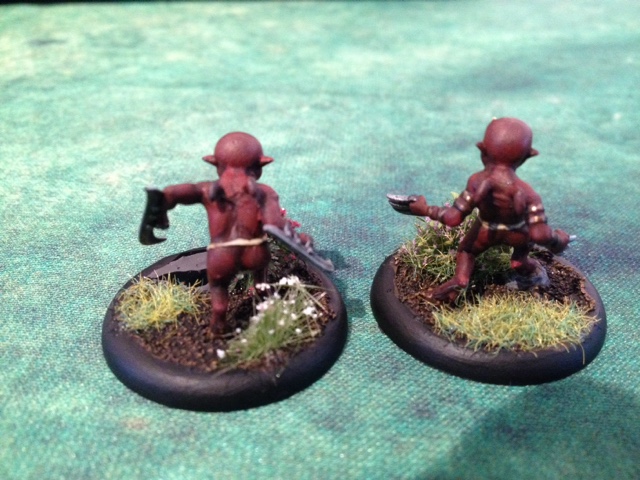 Finally, the mercenary former gladiator himself, Bishop. This is the most skin I've ever painted on a human model but I'm pretty happy with how it worked out. Tried to have him in more natural/plain clothes so went with jeans (blue/grey washed with agrax earthshade and then highlight lighter grey/blue) and lots of leather/tarnished metal. Went for greying hair as I always imagined Bishop as a man whose age noone knew. Maybe he is a really ripped old guy or maybe he has gone grey early from the horrors of cage fighting. I am planning on having Barbaros' hair painted similar to help bond the two together when I eventually paint him. 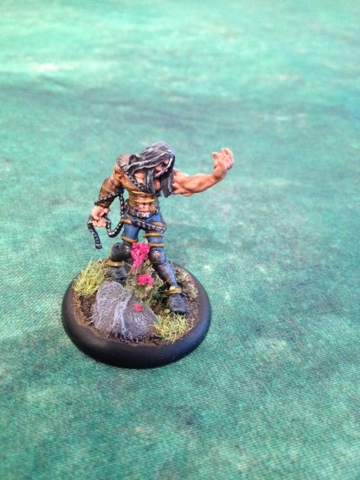 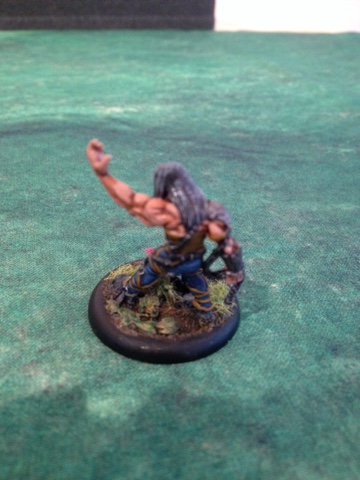 Gaming:
I played one last game since the last post I put up. It was headhunter, which I am starting to think may be Zoraida's best strategy and the one strategy she may have a spot in competitive play for me.
The setup was:
Headhunter (Standard)
Breakthrough
Bodyguard

Terror Tot
Beckoner
Nurse
and I summoned the voodoo doll turn 1
My plans with this crew/scenario was to use the beckoner (and zoraida obeying her) to isolate his models for Bishop or Nekima to take out. The silurid would be lurking waiting to jump in and pick up head markers, or Zoraida could obey Nekima/Bishop to walk and pick up head markers of models they killed. The nurse was taken to (in combo with the voodoo doll) shut down any huge hitters my opponent hired. The terror tot would function as a cheaper silurid, picking up heads and/or scheme running depending on my opponents crew choices

I decided to take Murder Protege (announced) on Kang and Bodyguard on Nekima (who could be healed/paralyzed by Nurse if things went really bad. My opponent took Breakthrough (unannounced) and Cursed Object.
Turn 1 we both just manuevered a bit, with me moving up the board and him mostly hanging back at the edge of his deployment zone, keeping his railworkers/metal gamin at the front. Game started well for me as I managed to lure an ill-placed metal gamin into charge range of Bishop at the start of turn 2. He charged it and killed it on the charge (thanks to being able to ignore armour/hard to kill. Bishop is ideal for taking out Metal Gamin and rail workers). He used his 3 ap to walk to the marker. Zoraida later obeyed him to pick up the marker scoring me a strategy point. I also managed to get Nekima far up the board on my right flank (Bishop was on the left and Zoraida in between them) to tie up a railworker to try to score a headmarker on turn 2. I also put down a LITS marker with my terror tot to try to bluff that scheme. Annoyingly, my opponent was still outactivating me at this point and activated Mei Feng last who railwalked into base contact with Nekima, gave Nekima Cursed Object and railwalked away. I had completely forgotten about cursed object, Oh well. I was also starting to get worried a bit at this point since it was clear my opponent was going to hang back with Kang to keep him safe (which also made me pretty sure he hadn't taken Bodyguard on him).
Turn 3 Nekima failed to kill off the Railworker as I hit once (doing 2 damage after armour) and then black jokered the second attack. The third attack he flipped a red joker for defense and I missed again... Damn. On the bright side I managed to kill off a rail worker with bishop (that I lured in with the beckoner again.) This time the silurid leapt in to pick up the marker. He tried to do the same Cursed Object trick as he did on turn 2 (since he still had activation control) but he black jokered the railwalk and couldn't reach Nekima to do Cursed Object. Turn 3 Nekima finally killed the Railworker and the terror tot (after sprinting into position) was obeyed to pick up the head. Man obeying models to pick up heads worked wonder. However, Chris had retreated Kang to his back corner at this point and bishop had still not crossed the center line by the end of turn 3.
So turn 4 I tripled walked Bishop to try and catch Kang. I also had Zoraida walk (after obeying the terror tot) and obey Bishop to walk a 4th time, which got him into base contact with Kang. Mei Feng put cursed object on both the terror tot and Nekima in turn 4 and knocked the terror tot down to one wound. At the end of the turn he removed cursed object from the tot to score another VP. VP count after 4 turns was 3-2. It should have been 4-2 for me but I completely forgot to announce Bodyguard. Oops! He had also walked up his Emberling and Torakage to try to get markers down for breakthrough on turn 5 (which I had figured out at that point what he had). Luckily I won initiative in turn 5 and managed to paralyse the Emberling so he would only be able to get one marker down for breakthrough (with the torakage). Kang couldn't kill off Bishop, but Chiaki tied up the beckoner and silurid so there was no way I was going to be able to pick up a head this turn. Mei Feng killed the tot and then moved and picked up his head (though this did allow Nekima to remove Cursed Object from herself).

In the end it was looking like either a 5-4 or 8-4 victory for me depending on if Bishop could kill Kang in one go (he had one stone left). With inbuilt critical strike I was doing 3/4/5 damage (and could do more with a 2nd ram). I hit and did min or moderate damage with the first two attacks (I flurried). He only managed to stone prevent 1 damage so with two attack left and Kang on 2 wounds left I needed to hit twice or hit once with a Tome (to ignore hard to kill). All I had left in my hand was an 11 so I could cheat one flip but only one. Attack 3 came and I flipped a high tome. Kang died and the game was over.

The game ended with me scoring 3 vp for the strategy, 3 for Murder Protege and 2 for Bodyguard. My opponent had 2vp for Cursed Object, one for breakthrough and 1 for headhunter. I won 8-4. Still getting a feel for Zoraida but after this game I am convinced that if I am ever going to use her in a competitive faction-wide setting it will probably be in headhunter. Obey is so powerful in it for repositioning and picking up heads.


Final Thoughts on #TOMB2
I wasn't playing malifaux during the first #TOMB, but was really eager to get involved this time. Despite being late on month 3 due to an absolutely crazy April, I found that the whole thing succeeded in the main purpose of making me paint a bunch of my models and try out new crews in-game. Not sure how much competitive play Zoraida will see with me, but it's always great to have another master around. Plus portions of this crew (Silurids, waldgeists, terror tots) tend to turn up in a LOT of the neverborn crews I build.

I will close the great journey that was #TOMB2 saying I am already looking forward to round 3 and wondering when it will be and what crew I will paint. Thanks Ben for starting the whole thing, looking forward to seeing when you lead the next one ;) Finally, here are some pictures of the completed crew in it's entirety 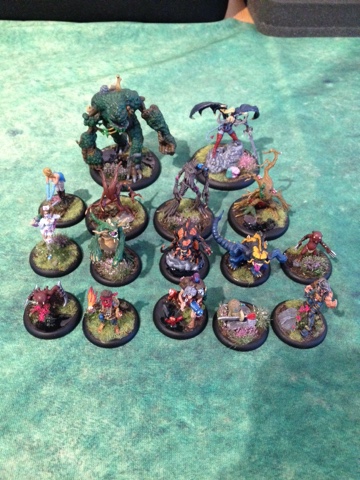 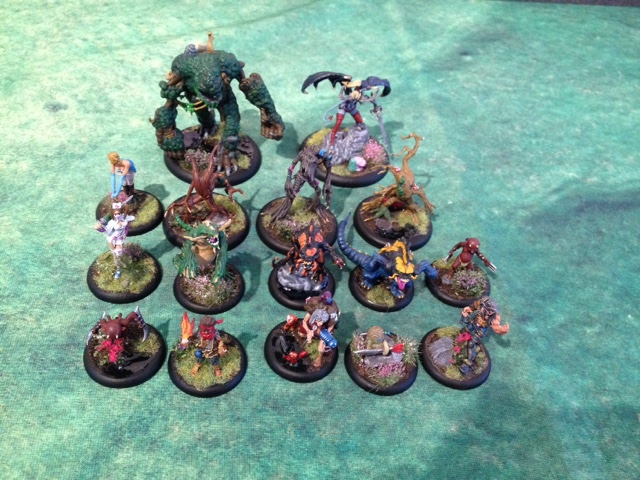