First off let me apologise for the lack of content lately. As a group we've not been gaming as much as we used to due to a mix of real life, gaming burn out, and the hideous heat that I'm slightly concerned is going melt the paint off my models. (For those non UK readers who are thinking it's not that hot please remember our entire country is designed to survive on grey skies and hot tea).

So what have we been up to? Well as you asked so nicely I'm going to tell you (also because otherwise this post would be tragically short)

Gaming Down Under - Part 1

So after 6 big years in the UK, arguably the tabletop mecca of the world it was time to head back to Oz. Kids are still young, weather is better and the beer cold etc.

I also thought what better time to actually contribute to the blog again giving a bit of a run down of my adventures on the 'Otherside' ... see what I did there !!

Email ThisBlogThis!Share to TwitterShare to FacebookShare to Pinterest
Labels: Down Under

Hello Everyone! I know, I know it's been ages. All of us here at the blog have had a bit of trouble finding the time to write lately, and sadly I'm not sure if it's gonna get better any time soon. I do want to do a review of how my year of Guildball has gone so far as I have played a LOT of fishermen since my last article. But as for today, we have our first (I think) product review on the blog. Our friends at Leodis Games were kind enough to send me a battlemat to review. As I know quite a few people have been picking them up lately hopefully this is useful for those of you who have not yet gotten ahold of one. So I decided to get a Malifaux mat as I already had an official Guildball mat and thought having a faux map with all the deployment lines would be very handy. So as for the product itself. I was worried the matt wouldn't lie flat after being in the tube as it is quite light (not as light as my cloth mat, but much lighter than the mousepad ones). The first time I used it I definitely had to weigh down the corners, but it stayed flat quite easily after the corners had been weighed down for a bit. 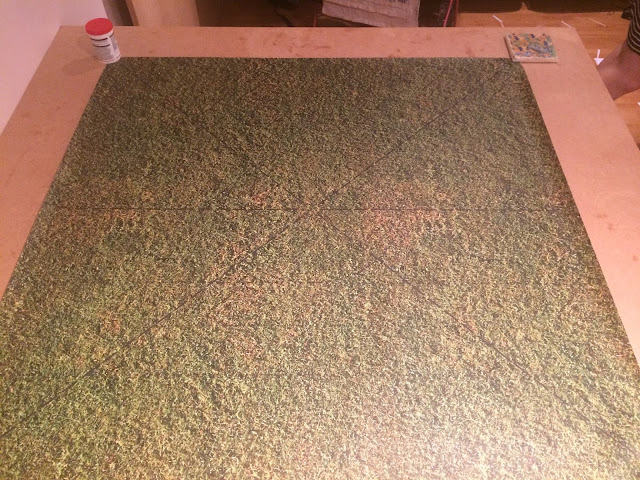 I chose a grass background as I thought that would best go with my Malifaux bases. I really like the pattern and was quite impressed with how it looked. 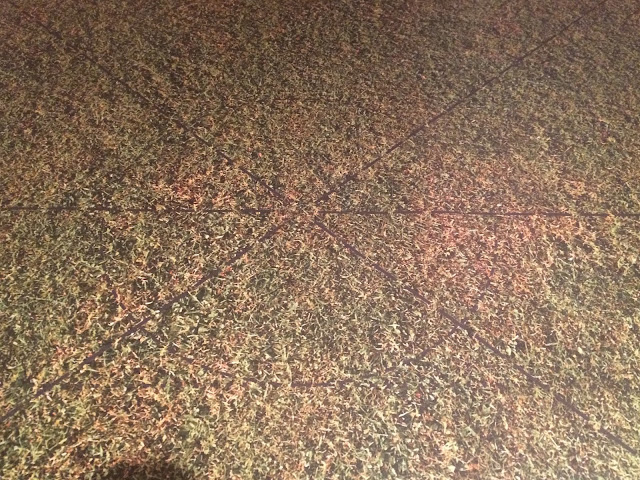 That is some realistic looking grass.... 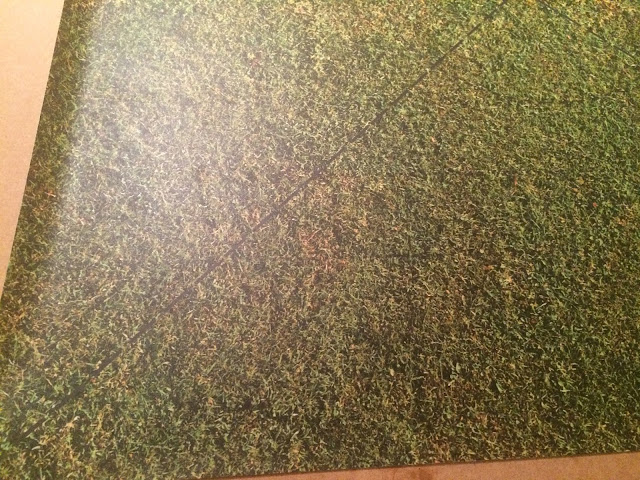 As seen here and in the above pictures the center lines (both diagonals and the standard centerline) are very clear at a distance and the 6" center circle is also fairly clear and incredibly handy. We actually played Search the Ruins in our game and it made it much easier to bluff not having to measure things from the center during the game (though I still failed to score for it... I hate that scheme :P ).  My biggest issue with the mat, however is that the deployment lines are very hard to see. I managed to find the standard and close deployment lines (although it was tricky) but even when I was looking closely I couldn't find the lines for Flank or Corner, which is a bummer. However, I think this is an issue with the grass mat specifically as if you look at the below picture you can see the lines are much clearer. I think a stronger line print is necessary for the grass matt or possibly doing the lines in white, which would be much clearer. I personally would rather have more obvious lines than very subtle ones, but could see that being an issue for some people so it may come down to personal preference. 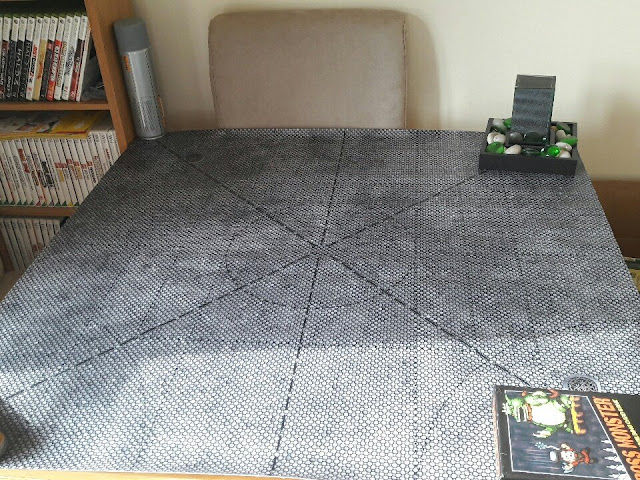 As mentioned above, see how much clearer all the lines are on the cobblestone mat. Would definitely suggest picking this one up rather than the grass one if you specifically are wanting the matt for the deployment lines. 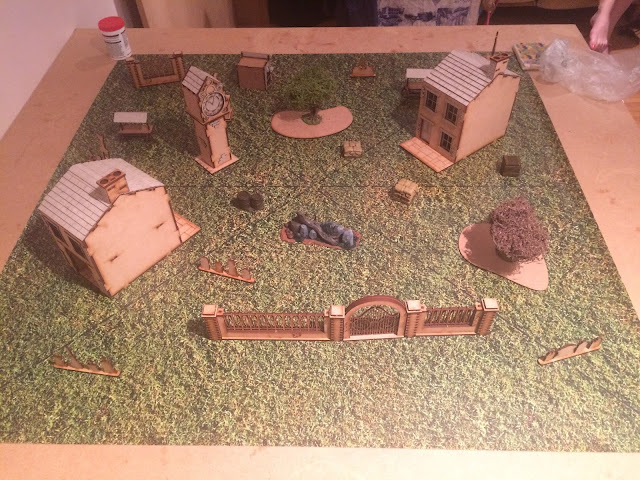 Here is how the mat looks with terrain from Bendy Boards (mostly) before we started our first game on it. Really looks good even with unpainted terrain. 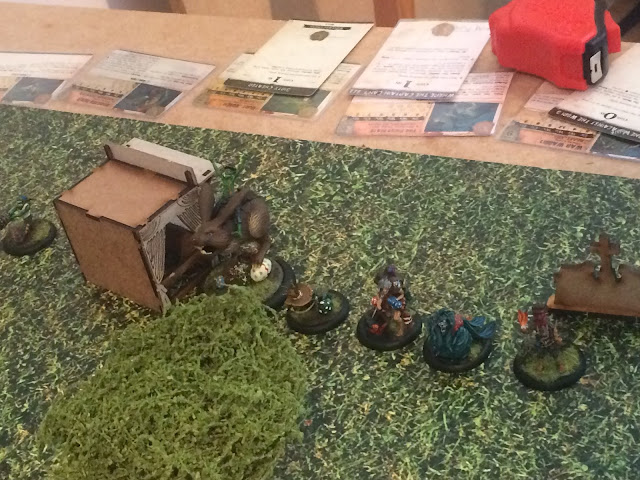 It's hard to tell from this photo, but the grass on my bases works quite well on this mat which is excellent. Really like the pattern. 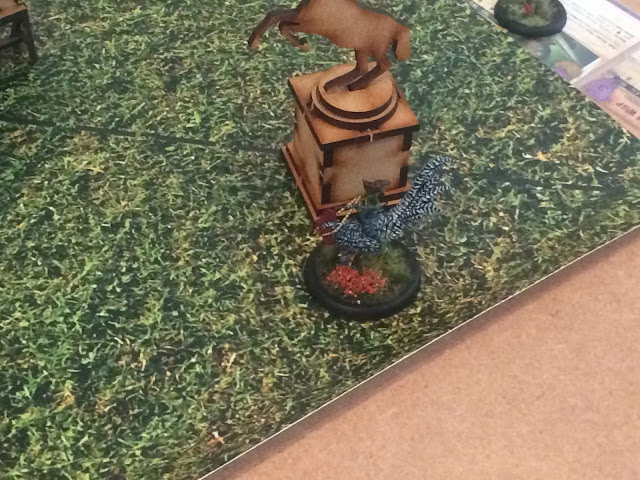 Here is my Rooster getting ready to put down a Claim marker near the centerline. 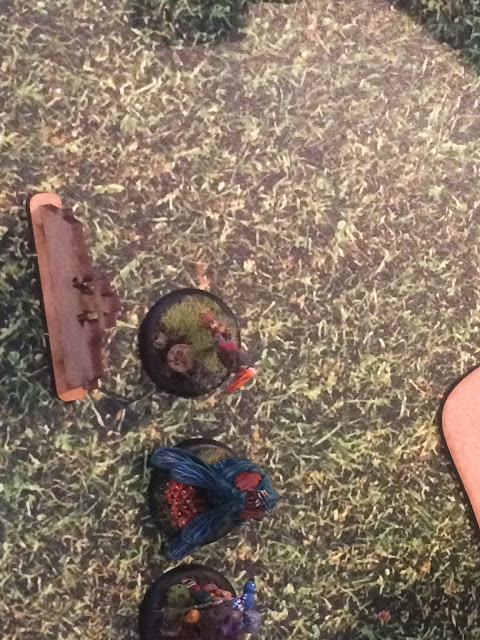 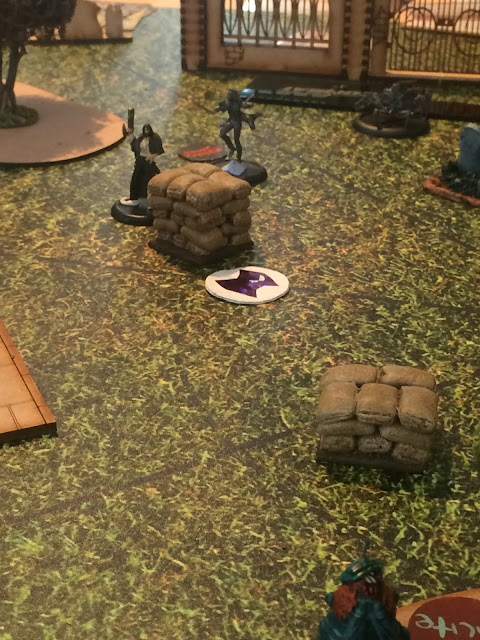 Here you can see the center circle quite well. 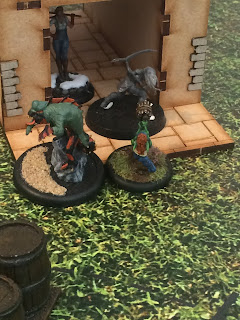 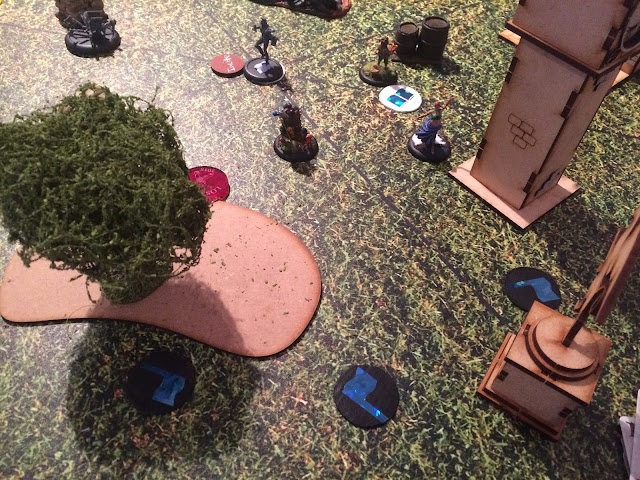 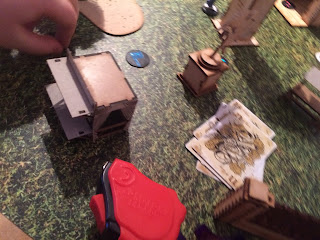 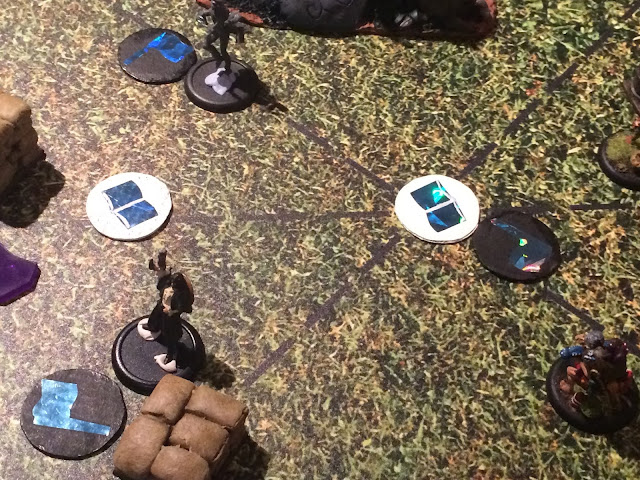 And here is a photo of me giving up a bunch of points for Search the Ruins to my opponent :P Cost me the game...

Anyway, all in all I am very impressed with the quality of the matt and playing with the lines on it was really handy and saved a bunch of time. As previously mentioned the only downside was the clarity of some of the deployment lines, but this appears to be an issue specific to the black lines fading into some patterns rather than an overall issues (as the cobblestone picture proves). Thanks again to Leodis for sending me the matt and I plan on continuing to use it whenever I play Malifaux at home.