Mei I kick some ass?

Ok this is my write UP of Crofaux. It was a nice 50ss fixed faction, fixed master 1 day event held by the lovely guys at the Croydon Gaming Club.

I’ll start off with a quick good and bads of the day and then do my game by game write up.

Good stuff
The TO was really lovely and eager to please. Great players and a relaxed atmosphere, with some of the Croydon boys recovering from hang overs (too much time in Tiger Tiger or the Goose).
The event was well organised and ran early and finished early. That meant breaks were well spaced and there was free tea from the kitchen.
The venue was a great size, and the big round tables meant that there was actually plenty of space of put cards, tokens, tape measures and rules. Larger tables are def a plus.
There was free parking at the (slightly) hard to find venue and it was a fairly serviceable games hall rented from the Rugby Club so there was a working bar.
The terrain was decent and well balanced. Sadly Mei didn’t get to try out the Asian themed table. Still my black undercoated Torakage looked the business on the Black Sand table.


Bad stuff (well not bad exactly but more kinda not good stuff).
As it was a hall, not a shop, there were no goodies on sale.
One of the tables was slightly the wrong size for Malifaux. A bit of marking out made it fine.
There were only 8 players so it was a bit small for easily matching skills at late stages. To be honest, that will get better as future events will be bigger. This one was the trial run.

The ugly
The evil Gremlins. These guys are so nasty. I’ll have nightmares about Rooster Riders.
The tournament didn’t have a fourth round. I like four round tournaments but I can see the benefits of three rounds too. I’m on the fence if another round was needed. It would let the TO throw in Headhunter or another Strat and it would smooth out the playing scores by making it easier to match by ability.
It was fixed Master. Again this is something that I’m on the fence about. I kinda like the idea of being able to switch Master during the Tournament. Mei Feng actually covers almost any strat or scheme just fine so it isn’t a deal breaker for me. Still it would have been nice to have been able to throw down Yan Lo or Misaki.

So all in all, a good small start to running tournaments. Always nice to get some more going on the London scene.

Anyway, on to the games.

I was so torn about who to take this time. I have been pulling my entire model collection out of boxes to take a good look at what is painted, and what needs doing to get my crews completed. I was trying to run fully painted for this tournament, but I couldn’t. I was flip flopping between Resser Yan Lo and Ten Thunder Mei Feng. In the end I took Mei as she is just so versatile and I love playing her.

Her's Mei and her gang lining up for Game 1 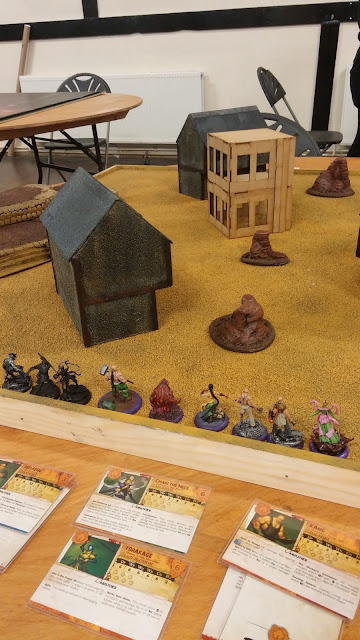 Game 1
I played against Zoraida (Gremlins). This was my hardest match of the day in some ways. Strategy was Reconnoiter. My crew just fell apart. A Malifaux raptor tied up Chiaki, for far too long. Then when Mei had spent two turns killing the darn thing, a rampaging Rooster arrived. It had just killed two of my Torakage with contemptuous ease, meaning that my tough Rail Crew was actually thrashing around at a couple of birds with no df abilities to speak of. Zoraida, Sammy and McTavish could drop scheme markers wherever they wanted whilst Mei Feng went blind under a pile of feathers. The low wound levels of the Railworkers and Metal Gamin were a serious problem as it was too easy for the Gremlins to ignore the armour/metal on metal. Still I got a few VP’s and kills so it wasn’t a total white wash. I think it finished 8-4 to Zoraida

Game 2
Strategy was Turf War. My opponent brought Neverborn Lucius. Probably my most fun game. Not just because I actually won, but because I had such fun with my Sniper and my Rail Golem. My sniper hit a Guild Guard with a focus shot on the first activation and dropped him with severe critical strike. Teddy scared me out of the centre and Kang took a hail of sniper fire but the Rail Golem, after flattening an Illuminated, acted as a tank for Kang to hide behind whilst he healed up. My sniper kindly dropped another Guild Guard with a focus shot with severe critical strike. Mei having got plenty of VP for Distract, skipped lightly off to the enemy deployment zone, whilst Kang fluffed his attacks against Teddy even with recalled training. Luckily the Rail Golem got to squash Teddy too. A final scrabble for positions left us all getting some Turf War points. Initially we thought my opponent had won, till a more careful reading of protect territory showed that he had only got 1VP from it instead of 3, swinging the score back to me by a whisker. I think it ended 8-7 to me.

Game 3
Strategy was reckoning. My opponent brought Ten Thunders Lynch with 2 Samurai, Chiaki, Sadir, Kang, and Hungering Darkness. This was difficult for me. I took Izamu, the Dawn Serpant, Chiaki, a Metal Gamin, a Torakage, a Katanaka Sniper and the Emberling. The plan was that the Torakage would be my Frame for Murder victim but might be able to get a scheme marker down for Breakthrough first with Chiaki and the Emberling doing the others whilst Izamu, the Serpent and Mei wrecked some havoc.

Sadly Lynch reduced the Torakage to 1 wound on T2 before wandering off to try to help Sadir kill off Izamu. So frustratingly close. Irritatingly Sadir was mostly flipping two cards on everything and was backed up by Lynch making him stupidly tough. Eventually Mei took him down. My Dawn Serpent took out his Chiaki but was then killed by the two samurai. In the last turn Mei dropped a scheme marker before beating Lynch to death. I celebrated by playing Kung Fu noises on my phone.

I think that the final score was 9-5 to Lynch. Still my opponent was the overall tournament winner so I don’t feel too bad about it.

So the day ended for me having had 3 great fun games, met some lovely people, and with 1 win and 2 losses which is an epically good result for me. Mei Fang was a bit hit and miss. Mostly she fluffed her attacks completely and so there were no chain attacks. As a beater, she doesn’t seem to cut the mustard but as a mover and a protector she rocks. All in all I found her a solid tournament master. Like most Ten Thunders masters, she doesn’t have lots of tricks and synergies but Vent Steam and Railwalk are both useful. I sometimes feel the crew needs a way to hand out more burning and get access to better healing. I really need to stop letting my best models drop dead to 2AP from my opponent. I must cover them more and stop letting them get hit with stuff that bypasses their main defences

On the otherside, obey and prompting masters seem the new hotness. Being able to get a model to do all its good stuff before it activates and then can do them again is nasty.

I can’t wait for future Tournaments at Croydon
Posted by Bad Luck & Blood at 22:39:00