The Bayou's Most Wanted - Francois LaCroix

Welcome back to the Bayou y'all! Last time we stopped by, I gave a quick overview of Burt Jebson and his amazing mullet and at the end of that post I mentioned that he and Francois LaCroix often compete for the same role in Gremlin crews, that of a beatstick. Up until very recently I tended to take Francois over Burt 9 times out of 10 but this ratio has begun to shift as I've seen what Burt is fully capable of as well as realising some of the shortcomings of the tiny green Clint Eastwood look alike that is Francois.


When you take a look at Francois' card then the first shortcoming is pretty easily seen necause his Df stat is a very lowly 4. This is mitigated a bit by having the Squeel Defence Trigger on a Mask (this is very common on Gremlin models, making them hard to pin down with melee attacks) as well as the ability to use Soulstones, being a Henchman. His Wp is a very respectable 7 (the same as Burt Jebson) and he boasts a fairly healthy 10 wounds.

Francois definitely falls into the beatstick category for the Gremlins. Like Burt Jebson he has both a decent melee and ranged attack, although unlike Burt, his melee attack (a Dueling Sword) has a slightly better damage spread of 2/3/5 as opposed to 2/3/4 on his Rough Rider shooting attack. But his real damage dealing strength (and his built in self-destruct button) is the Dumb Luck trigger. This occurs on a Ram (which comes built in on his Duelling Sword melee attack) and essentially doubles the damage taken by the opponent. The down side of this is that Francois has to take damage equal to half the damage that the opposing model suffers. So what are a few ways to keep him alive to carry on poking things with the pointy end of the sword?

I wanted to talk about a side of the game I don't usually mention, competition. Usually my posts are either all building community focused or straight up shouting at squirrels rants so this time I'm going to try and find a balance between the two.

Now anyone who has played me knows I'm far from competitive, I take fluffy, pretty, and sometimes stupid lists because it's fun. I like to win games when I can but I don't put too much energy into that side of things. This doesn't mean I have any problem with other people being competitive and putting their time into playing the best game they can.

As I've mentioned before 2017 is the year of the Arcanists for me. As a little taster I thought I'd share what I've painted up so far. (cough, filler!)

Part of the appeal for me when I decided to switch factions was the opportunity to have a who faction painted to a decent standard as the quality on my Ressers swing quite a lot from when I started them. I'm assuming that when I look back at these in a couple of years time I'll think the same thing, but that the benefit of improving.

I want to start by saying a huge thank you to Mike for putting in so much time and effort, all of the people giving up their time to help out on the day, and all the people that set up tables (including the man with a city worth of terrain in his van Mr Dave Brown). Also a shout to the staff at Battlefield hobbies, it's a great venue and they worked non stop for the whole weekend.

All my opponents were amazing and everyone I chatted to was great as well.

Prior to my first event I wrote this article detailing my though processes on choosing my 8-man lineup: http://abnormalifaux.blogspot.co.uk/2016/07/guildball-choosing-my-tournament-8.html

Having now played in 3 events I thought it would be a good time to look at my lineup again and how it has worked out. In all 3 events I have run the same 8: Shark, Salt, Sakana, Greyscales, Jac, Angel, Gutter and Fangtooth. I have played 14 games and won 11 of them, which I am pretty darn happy (and surprised) with. This article I'm going to go over these 8 players and look at who has been making me 6-man lineups and how they have done. I'll start with some quick comments on how Shark and Salt have been doing, but since I have no options to sub them out during an event, and I have neither Corsair nor Tentacles painted anyway, I'll mostly be focussing on the 6 players and if/when they see play. I'll go in order of games played as this seems the most logical 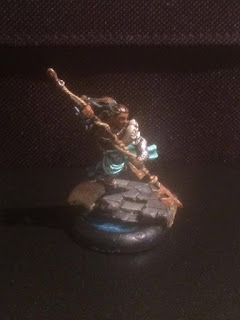 Shark is awesome fun. He is the star of the show and the whole team really revolves around him. He basically takes 6 inf every turn and my first thought at the start of every turn is "can Shark score". I've found that in competitive play he has consistently done more for me than he ever did before I started playing on events. I assumed that opponents would key on shutting him down and I would have to rely more on my team, but in fact the opposite has happened, where he has been even more of my rock than he was in casual games. For example Shark has 25(!) goals in these 14 games compared to 7 by the rest of the team (with no player having more than 2). Comparatively, looking at my casual games Shark has 35 goals in 32 games. That means his scoring average has soared from 1.09 GPG in casual games to 1.79 in tournament games. Also the rest of my team's scoring is much higher in those 32 games where Angel alone has scored 22 goals in 24 games and the rest of the team has scored 15. Shark also has never had a 3-goal game in casual play but has done it in two tournament games. What a star. He is also a captain that is very easy on the clock, until you time out. Trying to do a 6 inf Shark activation in 1 minute is a nightmare but I tend to find clocking out doesn't occur too often with this team (unless I miss a gimme goal chance). The biggest relevance all this has to my team construction is that I've found Shark is such a reliable goal scorer, it lowers the necessity of having another pure goalscorer (Angel) in the team for most matchups. I will cover this more under Angel. In short, Shark is amazing and I look forward to continuing to take him as my Captain to events (although I do need to learn how to use him against Corsair, the one matchup I still haven't won).

I Falldown, but I get up again.

On Sunday I headed down to Wayland for another in the showdown series of events, this time Falldown (get it, get it?).

A few days before the events it was touch and go if I'd actually make it due to work joys followed by a run of car problems, but I managed to cheat fate and come Sunday morning off I went to sunny Hockley.

As always when I get there first stop is the cafe down the road grab a tea (just a tea this time no full English for once I'm cutting back to just one breakfast a day) then back to Wayland to take part in the most sacred of showdown traditions. Standing around outside talking shit and waiting for the venue to open.

Once the doors were open we rushed in to queue up and register, then stand about talking shit again but this time inside (variety is the spice of life).

Email ThisBlogThis!Share to TwitterShare to FacebookShare to Pinterest
Labels: not the f***ing spoon for once, Ressurectionists, showdown, Tournament

The Bayou's Most Wanted - Burt Jebson

WARNING! THIS BLOG POST CONTAINS IMAGES OF 80s HAIRSTYLES THAT YOU MAY FIND DISTURBING. READ AT YOUR OWN RISK.

Who in the world thinks that combining several guns together to create a weapon that's somewhere between a gun and pipe organ is a good idea? The same person that thinks that loading up your giant murder machine of a pig with scrap metal (and a teapot helmet) is a good idea I guess. And by that I mean Burt Jebson, once a lowly rag and bone man Gremlin and now a freedom fighter, waging a one-Gremlin war against the forces of the Ten Thunders. Never far away from his trusty steed Gracie, Burt Jebson trundles through the Bayou with his Lucky Knife, his Backwater Pepperbox and his trusty mullet. Rumours swirl that it's the mullet that is the source of all his power...

Burt is something of a rarity among Gremlins as he has very high WP, at a very decent 7. His Df is 5 which isn't awful but he does have a nifty Df trigger to supplement his Df stat. If Burt succeeds on a Df duel with a Ram, he hits his All in the Reflexes trigger which allows Burt to make a 2/3/4 damage flip which cannot be cheated. This is particularly hilarious when he gets this trigger against a Sh attack from a model that is otherwise out of his range - it gives him a much larger threat range than his attack would suggest. I find this quite potent when combined with Lenny for the free Rams, it makes people think twice about attack Burt, even from range!

Burt's other 2 defensive tricks are Hard to Kill, which is standard in a lot of models, but nice to see on him because being an Enforcer he can't use Soulstones to prevent any damage, so the Hard to Kill gives him that little bit more survivability. His last ability is a bit dependent on your crew selection and placing. It's called Slippery and it allows Burt, when targeted by an Attack action, to select a friendly model within 2 inches to become the target instead, as long as the chosen model is also a legal target of the Attack action. This is a great example of how well Burt and Gracie work as a team as Burt can pass the Attack onto Gracie who has the ability to heal herself up with her Attacks and Triggers.