After completing #TOMB2 and uploading photos of my finished crew, I decided I should do a photo of all my painted malifaux models since I haven't had a big photo of everything together yet. I spent a weekend doing touchups on all my metal models, varnishing them (since I hadn't done that the first time), and painting all the base edges black (since many had paint splattered on them). The process was quite fun as I got to see how much I have improved from my earliest models (Dreamer crew) to the most recent (Bishop, Nekima).

Here are a couple shots of all the models I have currently painted. For anyone who is curious, 21 of the models are metal and 27 are plastic (as you can see I am not at all opposed to the old metals like some people are). Just a note that their are two models in here that I didn't paint as they were given to me by other players (thank you guys!). The Brutal Effigy was painted by Mike Marshall and Lazarus was painted by Joel Henry. 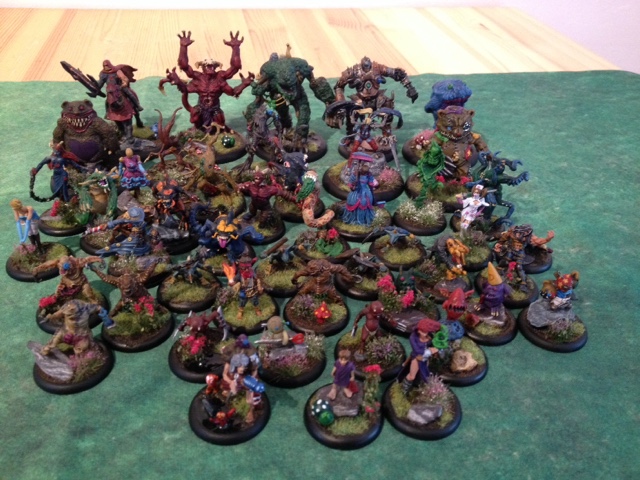 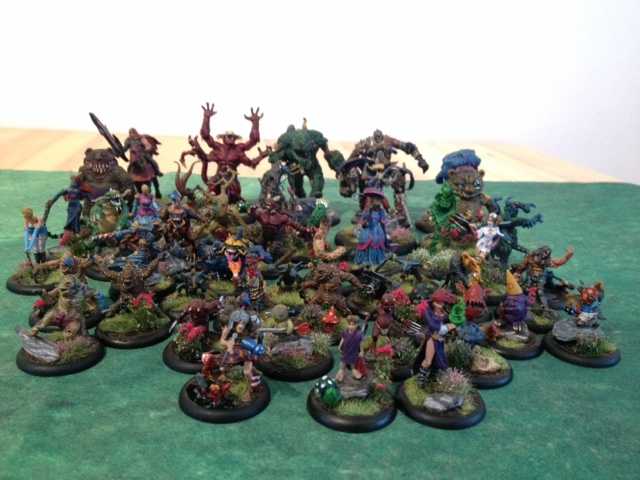 Below are my three painted masters. Currently I have played somewhere between 70 and 90 games with Dreamer (he was all I played for my first 6-8 months playing malifaux and the only model I've played in a competitive situation), 7 Games with Pandora (Need to finish a post on my initial experiences/thoughts with her), and 4 games with Zoraida (all as part of Tale of Malifaux Bloggers). I think Zoraida might be my favourite paint job I have done on any model. For more detailed photos of her you can check out my first #TOMB2 post here. As much as Zoraida is my favorite paintjob I've done I think Dreamer is one of my worst (he was also one of the first malifaux models I painted). I've improved my painting a lot over the last 1 1/2 years or so and really need to redo him at some point considering he is by far my favourite and most used master. I haven't decided yet whether I will strip and repaint the model or just shell out for the new plastics and take my time on them while I still use the metals to play. Either way I will probably want to finish all the unpainted stuff I have before starting to go back and do a second attempt on crews/masters I've already finished, but it's always fun to think ahead (for me at least). For anyone who is curious the next master I am going to paint is probably Jacob Lynch. I have a ton of Brilliance/Darkened themed models to paint as well so he will be the 4th neverborn master I focus on. I've also got Collodi and Lilith as well as the Viktorias but probably won't be getting to them any time soon. 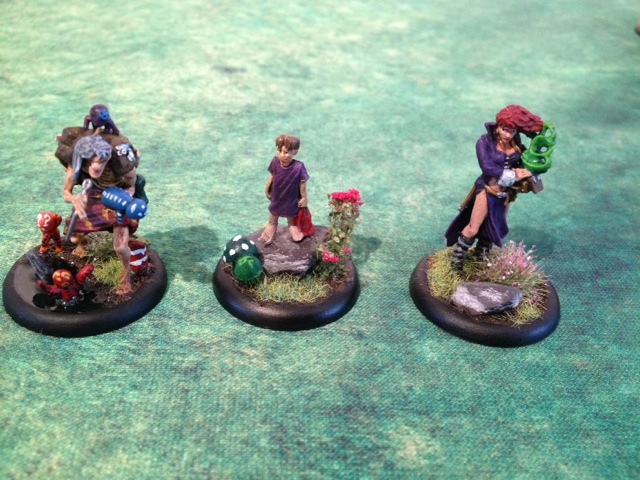 Next is my team of Henchmen. I'm actually really happy with all of these models, although Chompy (much like Dreamer) is a bit dated when you look at him closely as he was mostly dry brushed. Widow Weaver has had a head swap after her original head was lost when I moved last year. I converted the leaning over Beckoner head (of a spare Beckoner I had) by carving off the nose/eyes and greenstuffing on some spider eyes. Sadly you can't really see her eyes in this photo but I'm pretty happy with how it went. Unluckily her hand/umbrella were bent in a dropping incident but I'll just have to get used to that (at least until the plastic comes out). You can see Nekima and Bad Juju in more detail in the #TOMB2 posts (last time I'll plug them in this article I swear ;) ) Finally, Huggy is the one of only two Lynch-themed models (alongside a beckoner) I've painted so far and was a test model for the colour scheme I'm going to go with on all the brilliance-mutated parts on the illuminated/depleted. Pretty happy with how he turned out considering how derided he is as a model and how much time I had to spend greenstuffing his huge gaps. 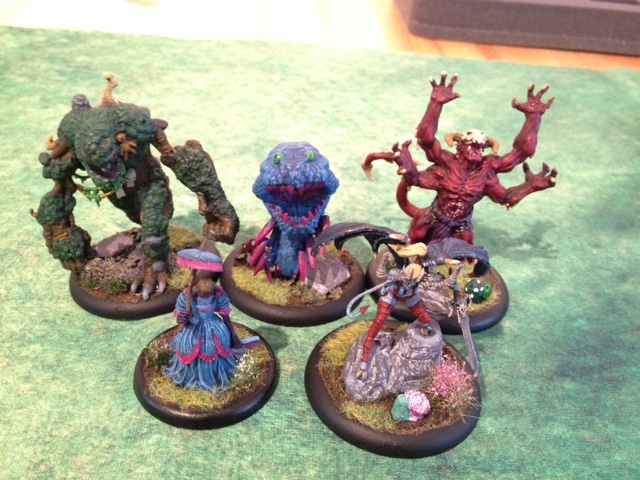 Here come the enforcers! The metal Teddy was the first model I bought (alongside the Dreamer box) and one of the most iconic models in the game. Hooded Rider is a conversion I've made using an old empire knight I had lying around since I was 10 or 11. I added a woodelf hooded head and a sword from the Daemon Prince box (which annoyingly keeps breaking off lately...). Picked up Puppet Baby Kade from Black Friday (when I ordered Nekima) and was a blast to paint. I tried to match the patches on Baby Kade with Mis Ery so they make a matching pair when I take them together. 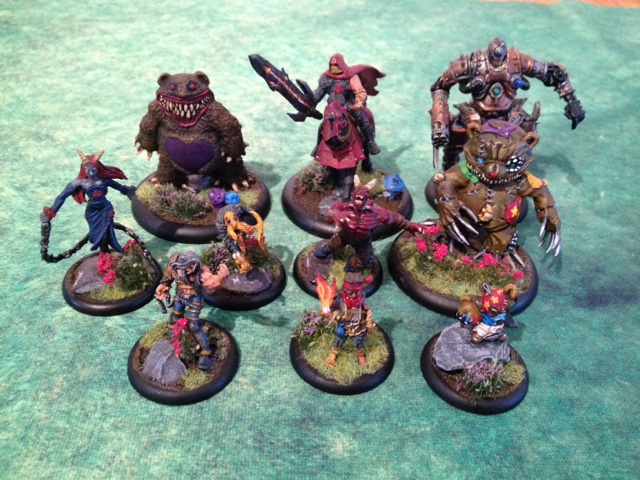 Here is the biggest group (unsurprisingly) the minions. I've talked about my waldgeists, terror tots, beckoner and silurids in my TOMB posts so I'll pass over them. Managed to get 4 stitched together to go with Dreamer. Did some minor conversions to two of them (the lighter painted ones) to try to make them less obviously duplicate models. Really like the button  eye I added to the one. I changed what is coming out of their stomachs, what they are holding and the position of their arms. Pretty happy with how it ended up. Lynch's skeleton (painted green) is my proxy for a Sorrow since I have Pandora but not her box set. I doubt I will ever use more than one sorrow so I don't think I will buy any others. Also have a converted insidious madness (mostly greenstuff but also some GW Tzeentch parts). I have a couple master-specific models in this section too: Brutal Effigy and Marionette (Collodi) and Nurse (Zoraida). Favorite minion paint jobs are probably the dark and light waldgeists (not so much the red-brown one). 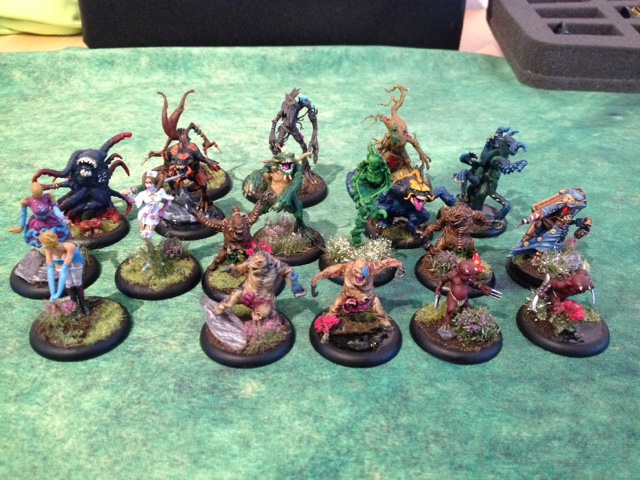 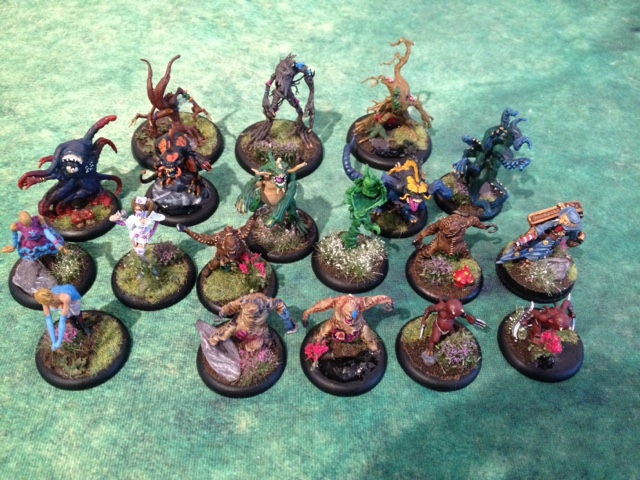 Last, and definitely least, the peons. I have 6 alps (5 pictured, the other one is being repaired) made from GW knoblars and some horns/spikes I added to their heads. Other than their snouts/noses they are very similar to the old metal alps so they work fine as proxies on the rare occasions I summon alps in with Dreamer. Then I've got my totems for Dreamer (daydreams), Zoraida (voodoo doll), and Pandora (primordial magic). 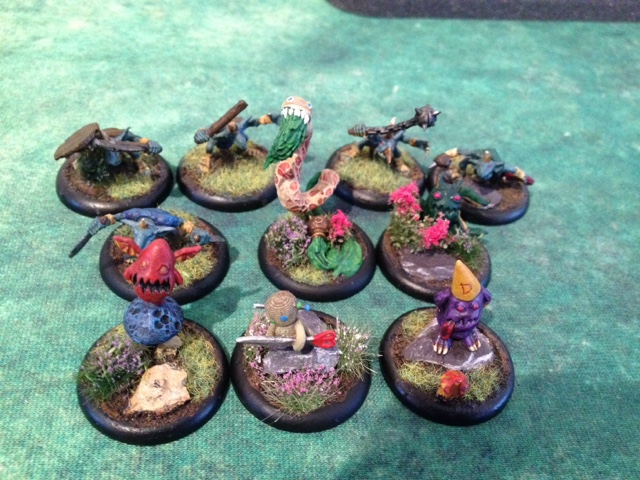 Well that's everything I've got painted so far. Next on the docket is finishing Dark Debts and the associated models (Graves, Tannen, 2nd Beckoner). Will hopefully have all my Lynch stuff done in time for DarkFaux, a tournament at Dark Sphere in July. It's set master so I'd like to have the option of Lynch as well. After that I think I will prob paint up a few individual pieces that fit well in lots of crews (McTavish, Barbaros, Performer, Taelor, etc) before I start on another master/crew (Collodi, Lilith and Viktorias still to go after Lynch). Still under 60% painted so have a long way to go, but I'm enjoying the progress!
Posted by Insidiously Mad at 09:30:00