Played my first Zoraida game against a newer player at Dark Sphere who was playing Rasputina. I know Rasputina very well since Pippatick and I have played a lot and that is her only Master.

My Crew:
Zoraida with Hexed Among you
Bad Juju with Eternal Fiend and Fears Given Form (which I forgot I had the entire game...)
3 Waldgeists
2 Silurids
Nurse
4 Stones


Francisco's generous 5SS cache makes him a viable leader up to the 40SS mark, though doesn't make up for the lack of extra activation a master gets. He's one of the only Family members that can handle themselves in melee and has various ways of making sure he can get there. A cost of 8SS means he's not cheap and while he can do a lot of damage he's not a glass cannon and can take care of himself in a variety of ways.

Again, like most Family members, Francisco has the COMPANION ability, allowing you to 'chain' activations for this model, if another model finishes its activation within 6". The same decisions for using the ability apply, in terms of activating later in a turn and not always using it but Francisco makes things trickier in that his EL MAYOR ability is best used early to protect more vulnerable models.

My Darksphere Tournament write up.

Ok first a massive well done to Pete and Darksphere for putting on a truly excellent tournament. What a great turn out – 18 players I think.

The tables were pretty good and the crews pretty varied.
I turned up with an air of excitement and an almost painted 10 Thunder Crew. As usual I stuck to mostly the same crew no matter what the strategy, scheme or opponent. This worked better for me than I expected.
Read more »
Posted by Bad Luck & Blood at 09:30:00 No comments:

Well here we are again. Sorry for the delay in posting this but I find the tournament write-ups quite exhausting. I think this may be the last one I do for a while... This write up is on my second two-tournament weekend of the year already (the first being League of Extraordinary henchmen). The Saturday (Feb 21) was at our own LGS Dark Sphere run by the estimable Dr Walnut. Sunday (Feb 22) was at Wayland Games in Essex. I went into the weekend with my hoping to continue my run of all my 2015 events in the top 7, and specifically hoping I could pull out one podium. I needed another top 4-5 finish to jump into the top 25, which I was hoping to do over the weekend. One of the top 3 players (according to Malifaux Rankings) in the UK would be at each event as well, Ben Crowe on Saturday and Mark Elwood on Sunday, so I was hoping if I could do well enough I would get a chance to play against some more of the top players in the country (having played Greg at Vappafaux).

It was really nice to not have to wake up as early as normally necessitated by tournaments as I am only about a 25-30 minute walk from Dark Sphere. Arrived just after 9 to help setup the tables and was really excited to start playing. I'm sure Peter (Dr Walnut) will have his own post coming up on the logistics of running the tournament and such, but I just wanted to add that it went very smoothly and was a thoroughly enjoyable event. It was a 3-round 50ss event. 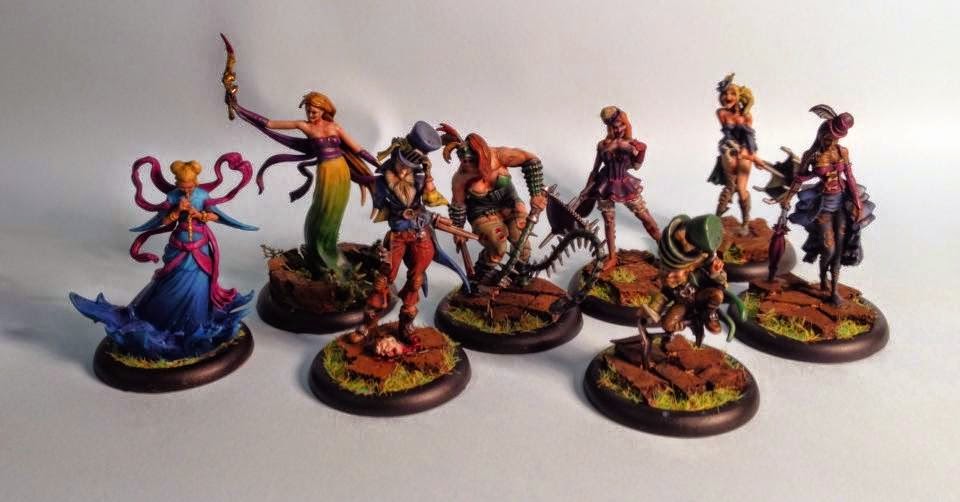 I've recently started using Seamus as my main master and thought I give a run down of what I’ve learnt about the charming gent that he is.
Seamus is a Reserrectionist master who has an eye for the ladies specially when they’re less than fresh. His place in the grand scheme of things in Malifaux is as a trouble maker, granted he has grand schemes and plots for power but he would probably settle for a high body count and a bigger gun.
Often likened to Jack the Ripper and the Joker he is often one of the first Masters people hear about when they start looking into Malifaux.

Here is another "how to" article based on one of my entries to the Wyrd Place terrain competition. 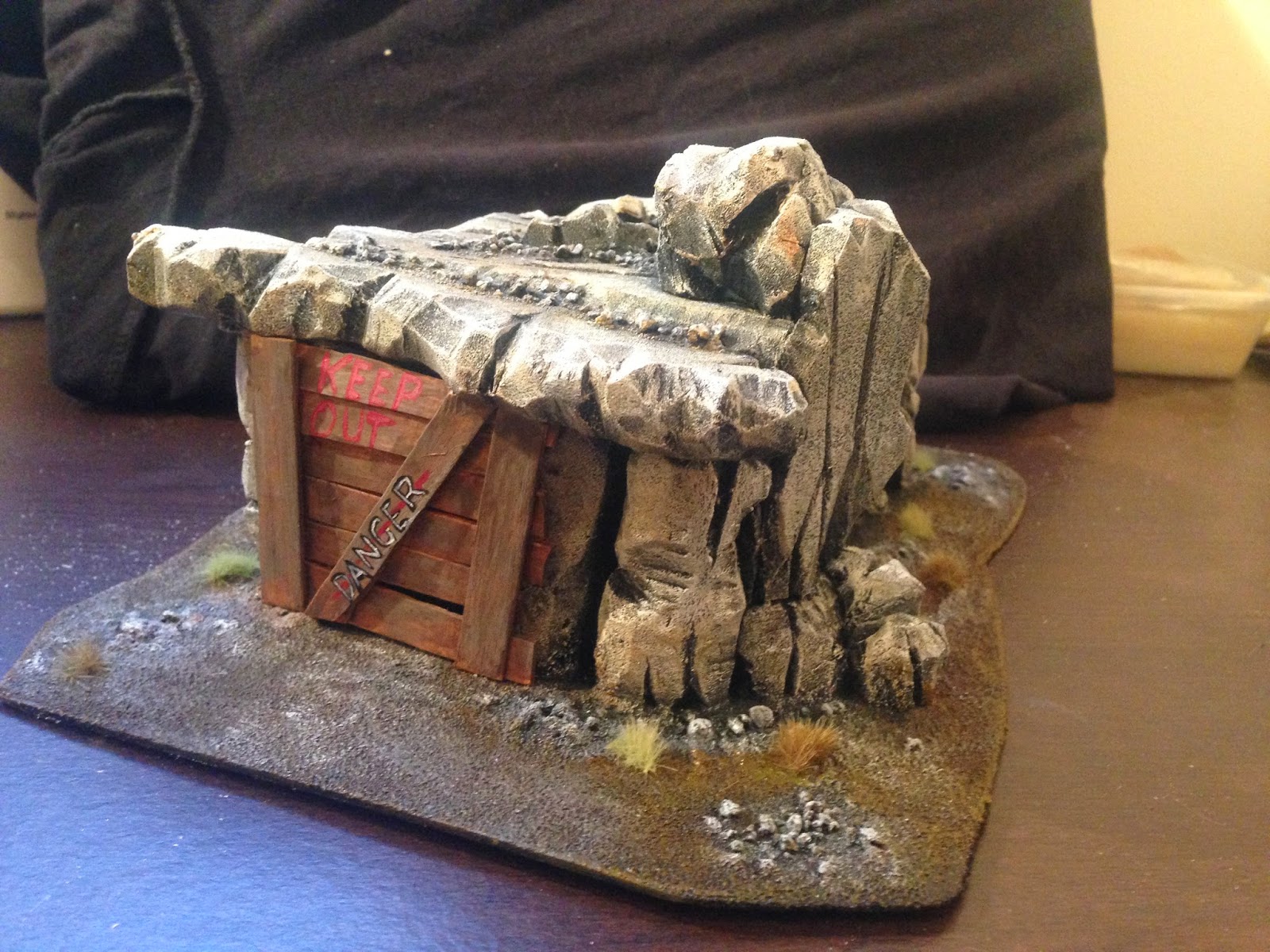 Today I will focus in a bit more detail with the carving. I had a vague plan that I wanted to do some form of mine. In the end I settled on the idea of an old mine that had been sealed up due to Neverborn dangers.

Where we last left off was with me having completed painting all of my models for month 1 other than the master herself Zoraida. I had also not yet played any games with the crew (due in part to tournament burnout and a game getting cancelled two weeks in a row). Sadly I still haven't gotten a game in, but I have finished painting Zoraida after a very busy Sunday spent painting her. I am very happy with how she turned out, although she took a ton of time to paint.

I decided that Zoraida would have a pretty red and yellow polka dot dress from her early days in Malifaux when she was still human. However, it would be worn and muddy from years of wear and tear, thus I painted a very bright and pretty red dress and added yellow polka dots before hitting it with two washes of agrax earthshade to dull it down and make it look dirty and worn. I did the same thing with her shirt which I painted white before hitting it with a wash of earthshade and 2nd wash of sephia. I really struggled with her skin at first since I have basically never painted human models before (playing Neverborn in Malifaux, Tyranids in 40k, Lizardmen in fantasy allowed me to avoid it for a long time). On my 2nd attempt I finally ended up with a result I liked. The other big theme with Zoraida I decided to go for occurred to me when I noticed that her box game with 7 voodoo dolls to go on her. This of course equals the 7 factions of Malifaux, so I decided to paint each Voodoo doll as a faction. I chose to have the two voodoo dolls with the most freedom (the confused standing one and the one climbing on her back) as the two factions that I like most, Neverborn and Ten Thunders. I also gave the Neverborn voodoo doll a button eye, much like one of my stitched and the baby kade puppet wars model. Also note that the Guild doll is drowning in the water. The water effects need a couple more layers and a blue wash to be complete but that will take a couple days since the effects take so long to dry. Still working on the water effects for the rest of the crew as well. The effects should be done in time for my month 2 post. 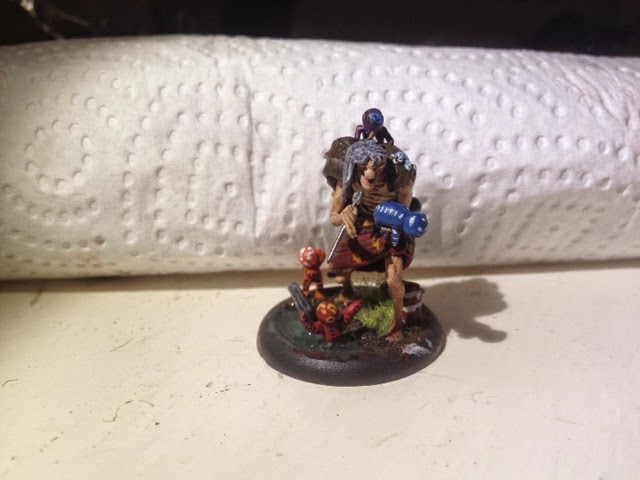 Having A Blast: The aftermath

Having A Blast
The aftermath 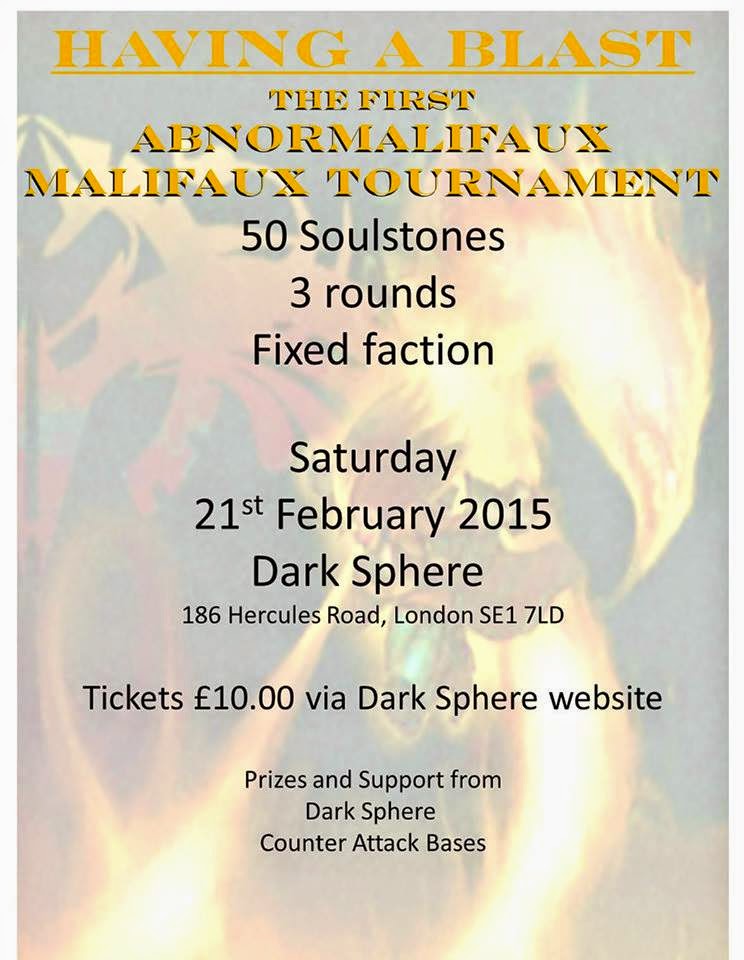 After it taking up two months of my life and a large amount of my twitter feed, Having a Blast is now over.
Despite a few hiccups it was a success. Out of twenty six tickets sold we had seventeen players (plus a ringer, big thank you to Arran). One pulled out the week before two that morning and six vanished.

I'll work through from the end of the day and review backwards from there.

So the winners first

Everyone played well and there were some close matches, I'm sure a few people will do a write up of the gaming from the players view but from what I saw people had fun and played 'faux what more could you ask.

The winners all got a certificate, a voucher and 1st place got a trophy as well to take home. Other than that all the players also got a 50mm marker made for the event by CounterAttack bases.

Email ThisBlogThis!Share to TwitterShare to FacebookShare to Pinterest
Labels: Having a Blast, Malifaux, Tournament

Whew, what a month. I knew the first month would be brutal from a painting perspective and I was right. On the bright side #TOMB2 has definitely succeeded at forcing me to get more of my stuff painted. This post will focus on the hobby side of my Zoraida crew as I have not managed to get a game in with her so far. By the time this post is up I am only part-finished my Zoraida model so she will be a part of the next post where I will also cover my plans for Month 2.

Hobby
Let's start of with a shot of the built and unpainted crew. I'd already started my waldgeists by the time I took this picture and they weren't part of the starter box so I ended up leaving them out of it. Oh well. Also, I apologize in advance for the poor quality of these photos. I have neither a proper camera nor decent lighting in my room. I have also just purchased some Vallejo still water effects but haven't had an opportunity to use it yet, so you will see that some of the bases have blue/green paint representing water at the moment. Eventually this will be done with proper water effects, but as I've only just got the bottle and I know it takes multiple coats, it will likely not be until Month 2 that the water effects will be finished. 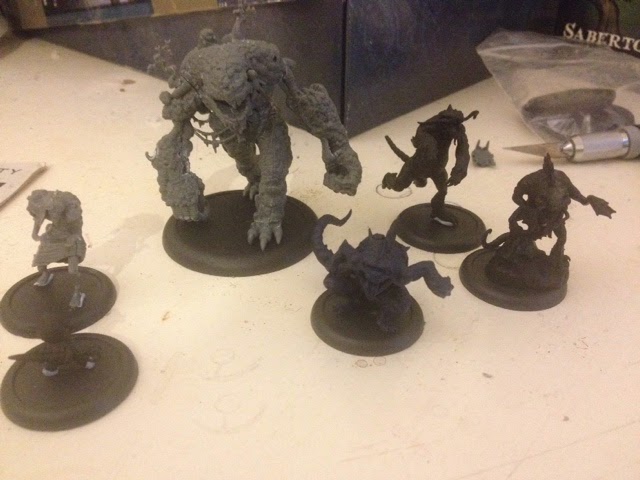