The Dragon goes to Septembers Curse

Wow what a cracker of a tournament. This weekend (27/09/2015 - for all you future readers, or time travellers), I went to Septembers Curse in Bournemouth, Dorset. It has to be hands down one of the best tournaments I’ve been too.

So this might be a long article - I guess I might split it down into a section on the tournament at the beginning, then a section on my games.

The venue was a spacious social club in Tuckton. I actually went to school round the corner (the long gone Homefield). It was a bit strange travelling from London to my home city and being an out of towner! Still the club venue was perfect. Lots of space for tables, plenty of light, modern and no strange smells (often tournaments are in some dank and funky places). The TO’s did a great job of prizes, raffles, mugs, sweetie bags, and even free water and a new fate deck for all players.

The tables were well set out, with cracking terrain. Even the score sheet was well done and laid out far better than most. A good variety of stats and schemes meant that the 36 players who turned up were guaranteed a cracking good day. 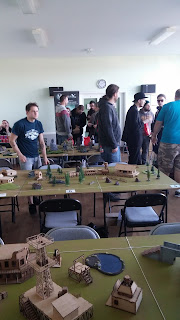 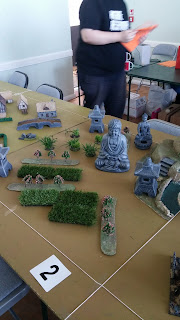 Honestly the only fault I can find is that it was hard to find a nearby coffee shop - that’s scrapping the barrel. I absolutely will go back to future events like this one.

Well then, how did I do? I was not confident going into this event for a few reasons. 1) I’m an epically shit player, and still struggle to know what all the schemes and strats do, 2) I’m an epically unlucky player who draws bad and flips bad, 3) there were some awesome top UK players on the roster, 4) I was taking Shenlong to an event with only 3 games with him under my belt.

Well I astonished myself and many others by actually winning 2 games and losing 2 so I came 18 out of 36. I was shocked to win 1 game, let alone 2. So what happened? Did the midnight deal at the crossroads work? 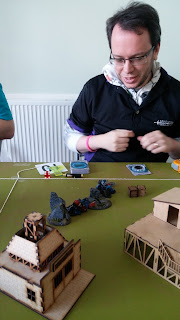 So the plan was to hide away from Lady J and the Judge to try to deny Strat points, then kill some death marshalls/austringers and make a run for his deployment zone with Sensai Yu.

Believe it or not the plan worked in as much as I got Sensai Yu into the enemy deployment zone with time and AP to drop scheme markers so Breakthrough and Entourage were in the bag. It was the killing that fell apart. I couldn't quite stay far enough away from Lady J to stop her killing a Samurai and the sniper. I didn't kill enough, quickly enough and I didn’t start using Shenlong in CC until far too late. I treat him as far more fragile than he is.

Game 2 WIN
So after a close loss to the always lovely Matt Cole, I moved to table 11 to play the snazzily dressed James Reeves.

Because this is such a good core list for Shenlong
I took Plant Explosives (first time for everything and besides Shenlong loves Scheme Markers) and Protect Territory.

James took
Viktoria of Ashes (Sisters in Spirit, Sisters in Fury and the other one!)
Viktoria of Blood (Mark of She’zual, Oathkeeper)
Hannah
Librarian
Student of Conflict
Johanna
Effigy
He took Protect Territory and Assassinate. Good choice as Blood Vik should just blast through Shenlong in one charge. 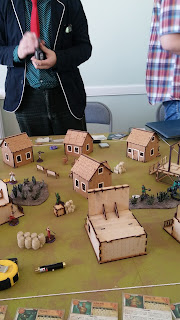 This was a tough game against a scary list. I started well, with my sniper hitting Blood Vik with 2 focused shots (gotta love Shenlong/Peasants for that). That got Blood down to 2 wounds and burned off 2 Soulstones. It kinda shook James up as I did it again the following turn to Ashes. The Soulstones kept the girls on their feet, but I think it led James to panic a bit as his girls were really pinned down by sniper fire backed up back the threat of the Samurai Gatling gun. A good fake out with the TT fat Brother meant I got a marker near Hannah. Then Shenlong neatly moved two other scheme markers to score 3 early VP. We both nailed Protect Territory and James picked up 2 VP for the Strat but I had nailed down both my schemes and got 1 from the start so the final score was 7-5 to me.

GAME 3 WIN
I moved up to Table 8 which had some great scenery. Two of the Squatters Rights markers were on roof tops; perfect for my Sniper and TT Brothers with their place ability. I played Matheiu 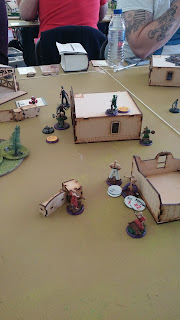 So this was my toughest game of the day in a way. I’ve never faced Ramos and wasn’t well prepared to deal with Joss (He is so broken) combined with Johan and Howard Langston. Every time I got one of them down to Hard to Kill, Johan just healed them back up. Poor Kang (yeah right) got Joss down to 1 wound, but bad flips meant Joss survived and did 15 wounds in return ignoring Hard to Kill, Armour and Hard to Wound. I was badly on the back foot but sent in Shenlong in a desperate attempt to hold off the mechanical onslaught. He went into Low River Style and held off Joss from T2 onwards before finally dying in the last turn. My sniper took his frustration out on Johan repeatedly, but couldn’t kill him. Luckily Shenlong had held up long enough for Sensai Yu to swing the game with a late run up the side of the board with the TT Brothers doing their House of the Flying Daggers flying thing to get the scheme points. Those unassuming scheme markers I dropped near Ramos were not for Breakthrough like my opponent assumed and so I Sprung the Trap and scored a nice 3 VP.

Final score was 9 VP to me, 8 to Mathieu

Game 4 LOSS
I played against the lovely Bucky. I’ve never had such a friendly opponent. From T1 we knew I’d lost and the final score, which is unusually but I’d made such a balls up of my deployment plan that it was so obvious. Still I had a cracking fun game and learned a lot about Shenlong from Bucky. 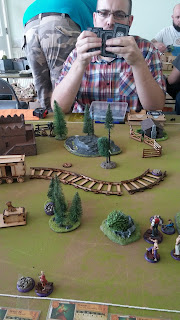 The game started with Bucky helping me understand more about Shenlong. I then rushed my models towards the centre as fast as possible. Bucky had put his sniper in a corner with a view across most of the field I had to cross, so I took a heck of a lot of wounds getting into the middle Taelor arrived first and killed an illuminated in one go. She then died to Lynch and the other illuminated easily. Mr Graves arrived and died almost instantly achieving nothing. Shenlong then arrived and started on Lynch and Sensai Yu. That was fun, putting a No 0 actions trigger on Lynch. Still that all fell apart quickly. My sniper was in cc with Huggy for a while but luckily a peasant arrived to rescue him. He hit huge with his broom, pushing Huggy out of range of the sniper who then scored Power Ritual.

So an easy win for Bucky I think it was 9-5 or something like that. I’ve never played Lynch before, but the damage out put really hurts!