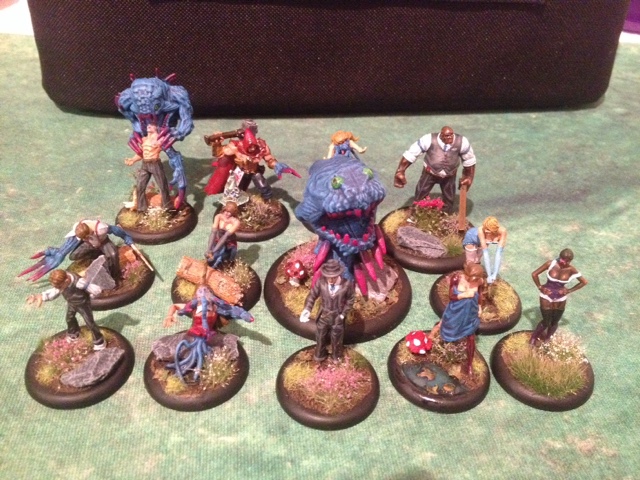 Disclaimer: Any master can do any strategy/scheme if you play well. But if, like me, you want to play a multitude of Neverborn masters competitively (I aim to have all 7 masters playable in tournaments) it is important to find the strengths/weaknesses of them so you can decide when to use each one. One thing I will not be covering in these articles is things like terrain tactics or which masters are counters for which factions etc, as these are much deeper tactical questions that I am nowhere near experienced enough to answer with these masters yet. I do hope to do a longer article (or several) on my competitive neverborn bag in late 2015/early 2016 after I have had some more events with masters other than Dreamer. If you have not read part one, it can be found here.

Strategies I like him for:
Collect the Bounty: This is the strategy I really see Lynch being a great choice. He tends to take a bunch of tough minion in his crew (specifically illuminated) and his henchman can’t give up points in this strategy as long as Lynch is still on the board. That is the one downside though, Lynch is not that tough to kill and if he goes down you are in trouble as you lose 4 collect points for your master, Huggy is no longer immortal and you’ve lost a ton of your hitting power. But as long as you are careful with Lynch his crew is great at this strategy.

Guard the Stash: Lynch’s crews have a load of models that are fairly independent and can both deal quite a lot of damage and are fairly hardy (with self-healing on Huggy and the illuminated). Graves, Doppelganger, Huggy, and beckoners can also move around the opponent’s crew. Since Lynch’s crew doesn’t rely on a buffing bubble (like Collodi/Pandora) or auras it is a great killing crew for splitting into two factions

Reckoning: Lynch likes to kill stuff dead. Huggy also won’t give up Reckoning points as long as Lynch is alive. Huggy can also obey around your opponents heavy hitters. Furthermore, Illuminated are tough, killy and relatively cheap so make up the core of a good reckoning crew. Would probably leave the beckoners behind in this crew as they are an easy kill, but other than that the crew is changed very little by Reckoning compared to the crews I run with other masters.

Strategies I don't like him for:
Reconnoitre: For me this is Dreamer’s strategy, with a call out to Lilith as a decent choice. Lynch’s crew can be sped up by his own models, but Lynch himself is very slow and has a relatively small threat range. You could load up on terror tots and depleted to make up the numbers but then you are losing a lot of killing power. In general I prefer summoners (like Dreamer) or masters with great board control (Lilith) for this strategy.

Interference: See above. It’s a fairly similar strategy. Lynch may be slightly better at this since Huggy can do a great job at tying up other models and beckoners moving around your own models is more useful. But I still would prefer masters with better board control. Also I love running swampfiend lists with this strategy (as waldgeists do a great job tying up the opposition) and as mentioned in my previous post I tend to run a brilliance crew with Lynch. You could run a Lynch and the swampfiends list, but I think other masters do that better (Zoraida, Lilith, and even Dreamer).

Make Them Suffer: Lynch does a ton of damage. Huggy does a fair bit of damage. Between them it is quite easy to score points for this. The core minions for Lynch (Illuminated, Depleted) are also really tough for their point costs. The only thing I may leave at home is beckoners as they are really easy to take out.

Entourage (on Huggy): Hungering Darkness is Wk6 Incorporeal, can move enemy models around that try to engage him with his “Heed My Voice” ability and can come back from the dead. These all combine to make him one of the best neverborn models (especially henchmen) for Entourage.
It is also really easy to do scheme marker schemes with terror tots who can be incredibly fast when you have the ace of mask in your hands as it allows them to sprint with every AP.

Schemes I don't like him for:
Assassinate: Lynch is really easy to kill. He may damage the opponent when they cheat, but other than that his defences are bad. He also only comes with a cache of 1 which means you either need to play soulstone light or drop a model. He’s also only got a threat range of 8-10”, which means he tends to be on the edge of the fight if not right in the thick of it. You can take some upgrades to keep him alive, giving him aether connection, mimic’s blessing or the upgrade that gives him Squeel. But as I always take Rising Sun and Woke Up with a Hand, you are at most taking one of those upgrades. I find him too easy to kill to use in Assassinate when masters like Dreamer, Lilith and Pandora are far more survivable.

Frame for Murder: Lynch loves to kill things. Huggy loves to kill things. Having both a Master and Henchman that can give up 3vp for this scheme makes it a frustrating one to play with Lynch. Especially since Lynch can’t do much else with his AP other than kill things it’s not ideal to have him giving up VP or not shooting. You could activate him early to spread brilliance around for illuminated to finish models off, but I still would prefer other masters with this scheme in the pool. HOWEVER, the one upside of this scheme is Huggy’s ability to force enemy models to kill off your frame for murder target. That being said Zoraida can do the same thing without worrying about giving up 3 vp as she will not be killing models herself.

Vendetta: Lynch tends to take a lot of 7ss models, which is kind of the sweet spot for Vendetta in my eye. In some ways you could look at this as a good thing as illuminated are fairly tough and could be used to take out other 7ss models. The problem comes with models like Beckoners or Graves who tend to go down easier than their pointcost might suggest. You can probably build a list to work around it, and it’s not as bad as the two above schemes, but it still discourages a list I like to play with Lynch.

Where he fits in my competitive case:
I mostly see Lynch as a great master in a killing scenario that does NOT have assassinate in the pool (as he is far too easy to kill if the opponent focuses on it). Collect the Bounty seems like his ideal strategy as he does all his killing with minions (Illuminated) and a henchmen that doesn't give up points since he is buried when killed rather than just dying (Hungering Darkness). I am also still struggling with Reckoning at this point, by far my worst strategy, and think that Lynch has a chance at becoming my go-to master for that as well, though he has heavy competition from Pandora, and potentially Lilith after I get some more playing time with her. Overall I don’t think Lynch will become a go-to master for me like Dreamer is and Pandora is slowly becoming. But I do think he will be an occasional drop when the strategy and schemes combine to make it an ideal game for him.


Thanks for reading my first article in the Masters After 5 Series that I originally thought of doing in January. Thankfully Part Two was much shorter than Part One. Next up will probably be Zoraida, but could end up being any of the Neverborn masters or possibly the Viktorias depending on how the next few weeks go. Please let me know if you have any questions or suggestions for the future of these articles.
Posted by Insidiously Mad at 10:00:00