First of all I would like to thank Mike Marshall, Lee Batrick and anyone else involved in running this event. I would also like to thank Joe Wood for driving Philippa and I up from London and picking us up from our hotel and taking us to the event each morning. The event was a ton of fun and it wouldn’t have been possible without you guys.

Last year I played in two 10-person tournaments at Table Top Nation in Essex, but until this weekend hadn’t really tested my mettle on the larger UK tournament scene. It was a great first introduction as having the top 16 players in the country out of the pool due to the Masters gave me some more confidence that I could do ok this weekend. My main goal for the weekend was to come out with a winning record. I went 3-3 in my 6 tournament games in 2014 and wanted to improve upon that. I would need to likely go 3-1 on one of the days to achieve this goal. I was also looking forward to meeting some of the guys I had been chatting with on twitter in person. I also wanted to focus on having fun and not making any major mistakes. I could accept getting outplayed by better players, especially against players with crews I had never seen, but didn’t want to beat myself by forgetting things like Terrifying…

The Friday night after we arrived was spent finishing painting Hooded Rider who was my last model I was planning on using for the tournament that I hadn’t finished. See below for the entire pool of models I had that I could use. Also I borrowed two silurids from a clubmate since I didn’t have time to paint mine (which was a very good call as they seriously pulled weight in certain games…) 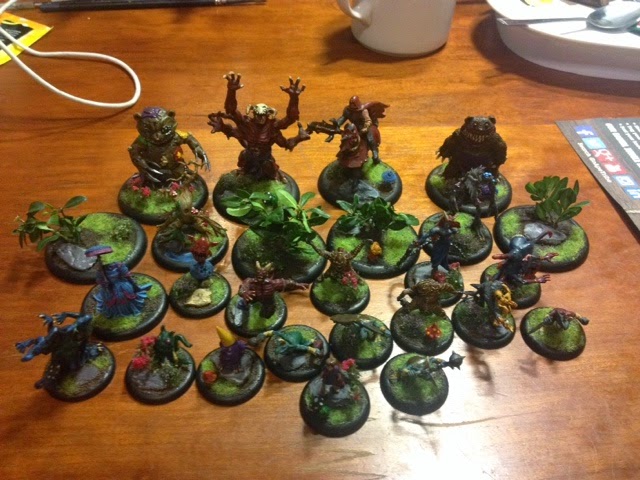 The tournament was taking place in a school and was actually quite chilly in the room. This was fantastic in my mind as most tournaments get really hot and grossly sweaty so it was a nice change to get to keep my sweater on. The board all looked great and had a good spread of terrain.

Without any further ado, let us get to the games. I’ve also decided to name a Most Valuable Player for my crew in each game to the model I felt carried the most weight in the game.

Game 1 vs Peter from Yorkfaux.

His List:
Mei Feng (Ten Thunder) with Vapormancy and Seismic Claws
Emberling
Toshiro with his summoning upgrade
Chiaki with Pull of the Graves
3 Rail Workers
2 Tengu

My plans:
As soon as I announced Deliver a Message and Breakthrough and he only announced Breakthrough, I thought there was a very good chance I could win this game. As long as I didn’t kill his frame for murder (if he took it) target model with my master/henchmen I could hold him to 5 scheme points and score 6 myself. I was going to send off a Silurid to deal with Breakthrough (as well as summoning some models later) and wait for Mei to come to me to score Deliver the Message (I assumed correctly that he would get her stuck in despite knowing that I needed to deliver the message. Her combat ability being too important to not take advantage of). This is basically what happened. We each scored 3 for Turf War (game ended after 4 turns). We also scored all the same scheme points EXCEPT my announcement of deliver a message got me the extra point for a 9-8 win.

His List:
Lady J with Last Stand
Francisco with Wade In
Sidir with Promises
2 Hunters
The Judge with Unrelenting Leader
Scales of Justice

My plans: I saw that he had taken more of a Reckoning crew. My plan was to use my outactivation to my advantage. Play to max out my schemes, try and deny his and make sure I left no models isolated on their own. I would play defensively using (summoned) Lilitu to draw in and isolate his models which I would kill AFTER all his models has activated. It pretty much went exactly to plan. Silurid managed to get all the LITS markers down himself and we both scored max points on protect territory. He got no points on Cursed Object as we were both too cagey to get stuck in (I thought for sure he had taken assassinate). I managed to outscore him 2-1 on head markers which left it at 8-4 after turn 5.
Post-game thoughts/highlights:

My plans: So I had never faced Molly but what I have read about her left me terrified about this matchup. That being said it was a great pool for me as I absolutely love plant evidence and breakthrough and thought I should be able to score max scheme points for the 3rd game in a row. The silurids were on duty to get those scheme points whilst the Waldgeists and Dreamer focused on getting Squatters Rights points. The Hooded Rider was there to take out his objective runners when they crossed into my side of the board and take out the Dead Rider if need be as with Retribution’s Eye (which can be discarded to ignore DF triggers) he had a huge advantage in that matchup as the game went on.

My Plans: Went into this game with an outside shot of winning the tournament on table 2 as one of 3 players at 3-0. However, it did not go as planned. I knew going into this game this was going to be a tough battle. Ramos is ace at Reconitter and I assumed that Interference would be similar. I thought I could score LITS by keeping the majority of the marker on buildings which he would have trouble reaching. The key to the game would be whether I could get the drop on Howard with Hooded Rider before he got the drop on me with Howard. I was hoping if I could do that I would be able to win on schemes and just try to keep the strategy close. … Sadly that is not how it worked out. It was the worst loss I’ve ever had. It went the full 5 turns leaving me with just a silurid left on the board. 10-1 loss (1 point for LITS bonus point for announcing and getting 2 markers down). Dropped me all the way to the bottom of the 3-1 finishes as I ended the day with a -2vp diff. Ended up in 7th. Still really happy with the day. Got badly outplayed by a better player in the final game but went 3-1 completing one of my goals for the weekend. Would only need to go 2-2 on day two to complete my other goal of ending the weekend with more wins than losses.

No Photos from this game, sorry.


So after the final game they announced the podium finishers, best painted and gave out the best in faction awards for 2014. Chris Hay won best painted and Josh Fletcher won the day with Graham using his decisive victory over me to jump to second and Ben Harris game in third. I also thought it was funny that 3 of the top 6 players were named Ben… After tidying up a bit we were off to the pub for dinner. Joe drove myself, Philippa, Ben Sime and Aaron. We decided to go straight there despite the fact that it was quite early, so the five of us ended up having a couple pints (of Rekorderlig Winter Cider… Philippa was the only one who got a beer). I think everyone else at least swung by their rooms but we were joined shortly by the Joel Henry. It was great spending some time getting to know these guys and when everyone else showed up it was nice to talk to a different group of people. Being at a group of small tables was kind of disappointing as it limited the social nature a little bit, although it was great to chat with Winton family. I really hope when I eventually have kids that they will be into gaming as well. The food was pretty decent and I really did enjoy the cider, even if it was a bit pricier than I expected. I think we left around midnight (and 4 pints deep for me). Report of Day two and a summary of my closing thoughts on the tournament/my experience more generally will be up on Friday.