First thoughts on the Crossroads Seven

As I spent so long painting up these lovely models I decided that I should actually run them so the plan is two club games and then a proper test at Bending Fate, a three round tournament happening at the end of the month.

I've read the cards and tried to get the auras triggers and tricks set in my head but I am very much a trial and error type player (heavy on the error) so the best way for my to learn is at the table.

First of the practise games down and I have to say I really like the Seven. They're far from perfect but I'm far from skilled so it's a good match.
The games was against fellow Abnormalifaux Brad with Rasputina in a very themey list. I'd come to terms with the fact I was going to lose models fast and hard but fingers crossed I could score a few VP on the way.
I ran the band as "outcast" just so I could hire the Malifaux child and with the full seven that's the crew.
The strat was extraction and I took hunting party and frame for murder (on Pride, seemed apt). Greed was ideal for smacking minions with her ranged action as 4 damage or discard soulstones is an easy choice for most players. 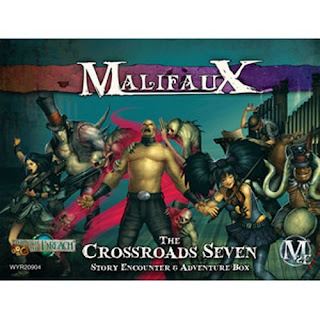 party as all my kills counted.
Frame on Pride was part luck but a few pushes with "king of the delta" from Wrath and the Child plus walk 6" meant that he could shoot across the board with the pretence of throwing up his discard to cheat 0 action which made him a decent target.

Extraction was just a case of trying to cling on through the storm of ice blasts. Sloth healing up and pushing models plus Lusts "now kiss" movement fun meant I could shuffle enemy models about enough to score each turn.

The game was great fun and ended 8-6 to me shockingly. A few lessons learnt and plenty of mistakes made but a solid start.

Just enough time for a second practise game before Bending fates and I was up against Michael (finally) with the Viks (ouch) in headhunter.

I took exactly the same setup running the band as outcasts with the child tagging along.

Scheme wise I was limited to what was possible to score so took inspection and Exhaust hoping to stay alive long enough to grab a few points.


This game ended up being absolute carnage, the Viks one or two tapping band members of the board each turn while the I paper cut them back well that and envy getting four attacks on rusty Alice to even things up. 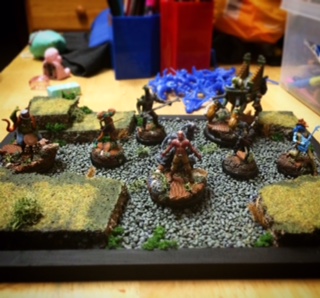 The game ended up with each of us holding one inspection point surrounded buy a pile of heads and no way to score our other schemes. So final score was 3-3 (would of probably been 4-4 if we had played turn 5 but didn't seem much point).

Once again really enjoyed playing the seven, I think it's because they take away a lot of the indecision I face building a crew or choosing schemes. There are some schemes that you just can't do with the band, things involving minions or upgrades are a no go. But this just means I spend less time weighing up choices before the game.

Well thanks for reading and hopefully next time I can let you know how the band got on at Bending Fate.


Oh and if Wyrd are reading this and you want to patch the seven I'm not moaning (for once) I wouldn't say no to making it so Wrath could summon Sorrows on his master upgrade. Would work fluff wise and visually  plus could give him something to do other than hit heal hit heal.

Email ThisBlogThis!Share to TwitterShare to FacebookShare to Pinterest
Labels: Crossroads 7