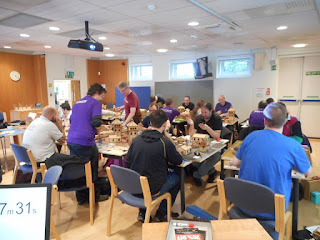 
Going into this event it had been 6 or so weeks since I had last played a game of Malifaux. So I was a little rusty and I had only given Molly about 4 games. So I was mostly looking forward to a long day full of Malifaux.

By this stage I had reflected a little on my last few games and had trimmed Molly of her Gorgon's Tear and was running Datsue Ba lighter on upgrades. Sybelle, Izamu and Grave Spirit were my core crew with Belles featuring quite regularly.

Overall I came 15th out of 29, which I was fairly happy with. And given some of my opponents I felt I had done well. It also gave me some great insight into things I wanted to try out more. In particular the game with Joe highlighted how useful Phil and the Nanny could be.

This was only my second time playing guard the stash. The first time was also against Joe back at one of the Ramsgate tournaments. Back then he thrashed me 10 nil. This time I gave a better showing. I had never faced Kirai before and Joe has her running like a well oiled machine. He had some insane card and SS draw going with Phil & Nanny and Sebastian.

In turn 1 he had summoned a Drowned plus two hanged. Damn. I managed to Whisper some secrets to his Izamu and my Izamu showed him who was boss. That gave me full points for framed for murder and plus 1 turn of guarding the stash. But Molly went down and shortly after that so did everyone else.

It was a fun game even though it was quite one sided. 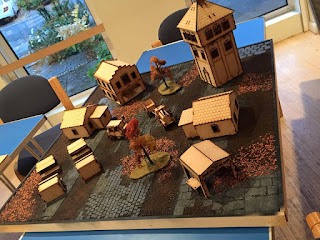 It is also a good game when facing Pippa. She pulled out Ironsides, who sadly doesn't particularly scare me. Extraction is a little tough for Molly and the scheme pool wasn't great. We both went for Power Ritual. Pippa went for Make them Suffer (a fantastic choice against Molly) and I went for distract.

I had a belle drop a scheme marker turn 1 and walk 6" thanks to the Madame. Next turn Sybelle delivered her a huge distance to almost the next corner. Later in the game she dropped Molly almost near enough to the third one. Glorious taxi service.

We both maxed out schemes and the difference came down to Molly managing to land a few key summons in turns to deny Pippa points in distract. The Captain killed so many spirits to really Make Me Suffer. 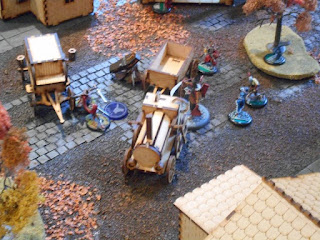 This game had two carriages in the middle of the board that caused a bottle neck. I was nervous of Lady J charging through and carving me up. Then I drew my opening hand and knew I could do something with this. In turn 1 Lady J came up close to the carriages so I summoned a hanged and with the help of a red joker knocked her to half wounds. Mentally I think this threw poor Rob off his game. I then plugged the gap with Izamu and supported him with a Grave Spirit. This guy survived a terrible deluge of blows from LadyJ, Executioner and the Judge. Lady J went down shortly thereafter and Molly, Datsue and Sybelle mopped the rest up.

I went into this game exhausted. I was out of practice. I had never faced So'mer either. James is a fantastic opponent and quickly we were deep into the tactics of this one. So'mer had a catapult and summoning engine at the back. In turn one I thought this would just throw gremlins to explode in my face...alas it rained Gremlins into the back of the board ready to drop claim markers. Oh SHIT!

Stake a claim is a tough one to come back on, but after James scored 2 VP I managed to swing things my way and get enough markers to get turn 4 in my favour. Turn 5 was an insane scramble and both of us managed to get 5 markers down. A tie on markers...so the game went to James, but holy crap we were scrambling around. After that game I was more energised than for my first one.

Molly is a great master. The combination of her and Sybelle really helped me get her where I needed her, this is obviously useful for summoning, but can also be great for schemes. Molly's (0) can be great to make a model drop an unexpected scheme marker.

Izamu and the Grave Spirit make a fantastic tank, this is particularly useful when you need to hold the centre and the huge engagement range is good for extraction too.

I feel that I am really starting to find my way with Molly. And loving her too.