So yesterday I took my life in my hands and run a D&D session for a pair of nine year olds, and surprisingly it went well.

I have a bit of experience DMing and I also have some experience keeping my daughter entertained (it's more art than science) so in theory I had the skill set to do this. I practice I had no idea how it would go. Both kids seemed keen to give it a try, my Sprog knows I play and often watches Critical Role with me (which did mean she was expecting Mercer level DM skills) Friend of Sprog knows a bit less about D&D but apparently has seen it on Big Bang Theory, so not completely unprepared. 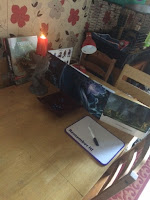 A few changes were put in from my regular style, firstly I let the players know that their characters would not die, at worst they would be knocked unconscious until the end of a fight. Also I had to remind myself no to swear (normally 90% of my D&D language is just me swearing at myself). There was no PC v PC fighting. And we could stop at any time if someone wasn't having fun.

First step was choosing what to run, I decided on Lost mines from the starter set and it came highly
recommended and the pre-gen characters seemed like an ideal jumping off point.
As always with a new module I skim read the first few pages said I'd read it properly later and then read it in a panic 5 minutes before the session. 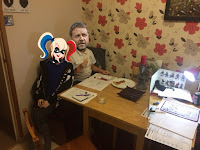 Onto character creation, the pre-gens from the box have most the information on but there is still space to add a little flavour.
Sprog picked the Cleric because she wanted to heal people and also hit things with a big Harley Quinn style hammer. We picked a few spells (spell cards would have been ideal here but I'll know for next time) The Dwarf cleric was named Jessica McDragon , JD for short.

Friend of, chose a fighter with a longbow because he liked the idea of staying back out of the main fighting. Less to set up here so just a quick read through of the background and we had Salazar Dice, grumpy human fighter. 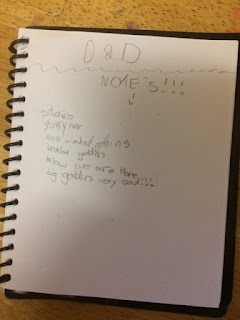 I have to say I was impressed with how both kids approached the characters, I handed them the sheets, and they treated it just like being given an exam paper (their words not mine). They read through it quietly, asked sensible questions and then, filled in what they needed to.

Next up the game, I won't go into to much story detail in case people want to play it them selves but the first part involves taking a wagon along bandit infested roads...
The kids had no problem working out who should fill what role, the archer sat atop the wagon, the armoured cleric walked a head. We the inevitable attack happened, they picked up the basics of combat really quickly too.

What followed was a battle, a chase, and an attack on a base. The team managed to keep track of the
characters and the story, they planned things out and they even made notes. I have to say I was so proud watching these shy, quiet kids: plan things out, listen to each other, and kick goblin butt.
Posted by Dr Walnut at 16:19:00