When is a Resser not a Resser.

For most of my time through the breach I've been in camp Resser but as a change is always good I decided to change it up a bit... a little bit... a very little bit.

So I decided decided to give Marcus a Resser twist, the old beast master can already hire a decent handful of undead beasties so its just a case of fitting him into the recycling way of thinking.

Fluff wise its not too far of a stretch, Marcus is an old professor revived by his studies in the wilds of Malifaux. He's already experimented with bringing beasts back from the dead resulting in the jackalope. (an experiment he'd never been able to repeat, proving that ressers are the most cleverist). 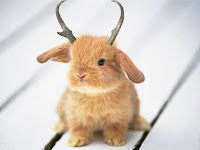 So if we say Marcus did manage to recreate his work on the demon bunny, maybe with a little help
from a friend in the Resser school of thought. Then if we imagine that a run in with the Guild left his pack gunned down. It wouldn't take too much to believe that Marcus could turn to to the dark arts of necromancy to seek his revenge???

First things first we need Marcus to look the part. Marcus is a wild man now so a more tribal look was the idea. Somewhere between shaman and a voodoo witch doctor, the sculpt is already full enough of skulls to look the part so it just took a bit of war paint and he was ready to wake the dead.

Once I've got a master he needs a pack and to start I'm thinking of running something that fits the fluff in my head. 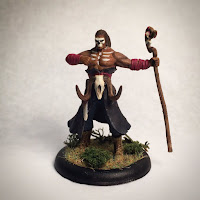 Marcus - Vengeful necrotic beast lord. His whole pack killed in a bloody battle against the Guild, only saved by the vitality he draws from the wilds of Malifaux. The old man dragged himself off to lick his wounds and plot his revenge.


Anna Lovelace - A Resser merc that fits nicely into "the whispering sweet decaying nothings into Marcus's ear" slot. Her academic past gives her an opportunity to cross paths with Marcus in the before days and she has just enough tricks to be impressive. Drawn to a grieving and angry Marcus together they can experiment with resurrecting the beasts of Malifaux. 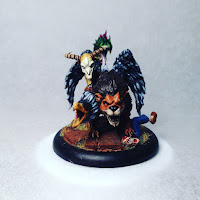 Rogue Necromancy - A, because why wouldn't you want one? B, Marcus and Anna rebuilding the pack would have the materials, the knowledge and the desire to create a massive, vicious monster who can smell fear and breathe acid. C, I really, really like rogue necros

Shikome - Deadly beasts that stalk the space between life and death, created to deliver deaths judgment... I can imagine these ladies queue up to help Marcus get his vengeance on the world of the living.

Canine remains - The front runners of the pack and the first experiments the pair conducted together, the zombie dogs retain the same loyalty to Marcus as they did in life, while keeping a cautious distance from his new mate.

I'll have to toy around with upgrade that work with this set up and also find the time to try and test it but I look forward to a few fun fluffy games with the big man to see how it works.
Fingers crossed it won't be too long before I can follow this up with a few battle report to let you all know how Marcus's trail of vengeance is going.


Oh and if Marcus ever misses some of his old friends, they might just be being prepared to meet up with him later on... 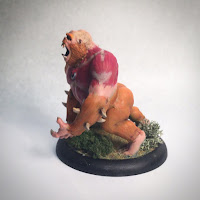