State of the Project Queue!


Hey guys! I had a few (OK one) request on Twitter to see more of the projects I'm working on currently. So as I'm never one to dissapoint my literally tens of fans, I thought I'd do a quick round up of what what projects I have going on and in what state they're in.


If you follow my Twitter at all (@Elessarion30) you've probably seen pictures of these! They are from 2 Kickstarters run by a very small but awesome company called Slap Miniatures. The first one was called Pewter Ponies and was a very simple set of sculpts, mostly generic ponies although if you're a fan of a certain magical cartoon about friendship, you MIGHT think a few of them look familiar. The second Kickstarter was named The Evil Ponies, because if you've got good ponies then you have to have villains too! This campaign was certainly more ambitious with the sculpts and included the 4 ponies of the Apocalypse (yes Death has got a small Death of Rats on his back, it's awesome), a necromancer and skeleton ponies and 3 witch ponies. There was also Dr Pones (Best. Pun. Ever) and his faithful assistant Rocquefort. There's also a D&D type group from the first campaign, including a bard, thief, paladin, wizard, enchantress and a barbarian.


These were a really fun painting project as they gave me a chance to go wild with some bright paint schemes and also a chance to practice my fairly terrible freehand to try and paint on cutie marks for some of the ponies. They're mostly finished, I just need to add grass and flowers to some of the bases.

Another ongoing project that I've thrown myself into this year is to do a warband for various skirmish games (Frostgrave, Open Combat etc) made up entirely of the smaller races. Yeah sure, elves may LOOK all willowy and graceful but honestly, they go through WAY too much conditioner. And lying around languidly on tree branches gets boring after a while. Plus splinters. So. Many. Splinters. So I decided that my warband should be something of a self portrait band and be made up of female dwarves, gnomes and halflings. 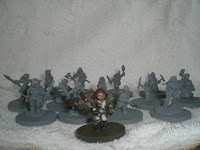 This project all got started when I came across another cool Kickstarter campaign by the fabulous team of Oathsworn Miniatures called Heroines in Sensible Shoes - which was to raise funding for a smallish range of sculpts, all female adventurers but without the "chainmail bikini" look which has become a bit of a trope in fantasy. All these female miniatures were clad in sensible adventuring gear and no high heels allowed!

I eventually pledged for the female halfling rogue from the first Kickstarter and from the second campaign I went for the gnome wizard, dwarf queen and a forest gnome ranger from the first campaign that I'd missed the first time around. To flesh out the band I've bought some amazing miniatures from other places like Reaper (care of the fab Bad Squiddo Games), Hasslefree Miniatures and Otherworld Miniatures. While I've only painted one of the miniatures so far, the band is looking in great shape and I can't wait to get more done.

Don't panic, I've not gone over to the filthy green side of Malifaux. One of my fellow Abnormalifaux bloggers (Bad Luck & Blood) is in the process of moving house and so has had his hobby time cut for the forseeable future so I offered to step in and paint some miniatures for him. There's a nice mixture of Resurrectionists as well as parts of his plastic Leveticus crew so it's a chance for me not only to do a favour for a hobby pal but gives me a chance to paint some new miniatures I wouldn't otherwise get the chance to put a paintbrush to. 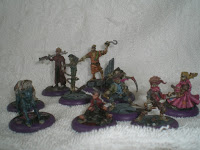 In our little group of bloggers we have a running joke that his favourite colour is pink so I've been trying to incorporate that into some of the miniatures. While it doesn't work for every mini, I've tried to find places where it seems to fit.

There's a whole bunch more small projects I've got on the go - an ongoing stream of Batman miniatures for my friend Lori, some Sisters of the Thorn and an Artemis stand-in for Of Gods and Mortals, Greeks, monsters and knights for 7th Voyage and that's not to mention so many of the random minis I bought just for painting!

Email ThisBlogThis!Share to TwitterShare to FacebookShare to Pinterest
Labels: Hobby, Other Games