Yes it is I, your intrepid explorer! I have returned from a perilous and harrowing journey to Outside of London and into the Middle Lands North of the M25. Basically, I went to a tournament in Warzone Workshop, located in the exotic location known as Northampton.

For those playing along at home, I'd been to a Story Event run at Warzone Workshop at the tail end of last year and had a great time. This time it was a standard 50SS Fixed Faction event run by the local Henchman Ben Harris. And I'd volunteered my services as an assistant TO and spare player for the day. Let the games begin!

We ended up with 25 players after having a last minute drop out so Ben and I decided to rotate playing and being admin, which gave us both a chance to relax and get a drink given it was shaping up to be a very warm day and while the venue is perfectly fine, being on the top floor of an indoor shopping centre means that there's not a lot of options for ventilation. We did our best with strategically placed fans but the hard truth is that putting 27 people in any confined space for a long period of time on a hot day and it's inevitable that the temperature is going to be on the high side! 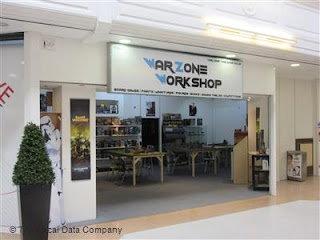 We had a good mixture of players from different areas - there was a strong showing from the local meta, including my frequent travel buddies Karl McConnell and Craig Woods, Graeme Nicholls and a few new faces I hadn't met before. We were fortunate also to have amongst us The Man, The Beard, The Legend that is Ritch Keeling. Ritch is currently fufilling a bet to play this year's Nightmare Edition crew at Nationals so he was getting some McCabe practice in. If you'd like to find out a bit more about his bet and the road to Nationals then make sure to check out his blog Brutal Efficacy for more details. Tis a good read. And last but not least we were all blessed by the presence of the Lord of Malifaux Mike Marshall (aka Captain Troy Tempest) who had made the trip over from Norfolk with the ever-lovely Lee Battrick. Truly, we were honoured.

First round and due to the drop out, poor Graeme drew the short straw and had to play the first ringer - me. As the strategy was Reckoning, I decided to take Ophelia and a fairly elite crew including Mancha, Trixiebelle, Merris, and Francois. For my schemes I decided on Leave Your Mark (between Merris and Trixie this seemed doable) and Undercover Entourage on Trixie. Graeme had moved onto Arcanists for this event and had picked Kaeris for this game. Ultimately I couldn't do enough damage to his crew to score for Reckoning (bloody Joss. Stupid Armour. Sodding Johana with a sodding heal!) and Graeme played very smart to kill Trixie when I moved her too far forward and left her in range of the Oxfordian Mages. The game ended in a very decisive win for Graeme but it was a very fun game, despite me still being half asleep and flustered so apologies to Graeme for that!

Next up was lunch and the painting contest. The standard was incredibly high from all the entrants and out of the field of 25 players, we had 14 entries for the contest. That's pretty incredible and really good to see so many people making the effort to have nicely painted minis!

Round 2 and I'd tagged in Ben as ringer so I could take a break and have a sit down, which was quite welcome at this point of the day! I also managed to have a wander round and see how everyone was getting on - the atmosphere was very relaxed and there was a lot of laughing from various tables which is always a good sign everyone's enjoying themselves.

Onto the final round and I jumped back in to play Nick, who was a local I hadn't met as he'd been taking a few months break from Malifaux and had only just started attending events again. This round was Extraction and just for ease of playing I decided to go with Ophelia again, but a slightly different crew including Gracie to tank some damage and a Rooster Rider to try and get 3VP for Leave Your Mark/Convict Labour which were the two schemes I picked. I was a little worried as Nick was running Von Schill, a Master I don't have a lot of familiarity with. Plus his chosen crew had an awful lot of bulletproof models in it, not ideal against a shooty Master like Ophelia! It was another fun game and Nick was a really lovely opponent to play against, even though the game went fairly definitively my way, he managed to keep laughing and joking - especially when he managed to get the Abomination summoned in by Rusty Alyce to kill Mancha Roja. Gutsy little guy! Finished up 8-0 to me.

So the end of another event and another fun day. Time to hand out the prizes! As is usual at the Warzone events, the prize support was excellent, with a selection of boxes and other goodies for the raffle as well as some lovely trophies for the top 3 in both painting and playing.

So once the dust had settled we had a top 3 in the painting of Hayden Smith (3rd) The Lord of Malifaux Mike Marshall (2nd) and in 1st place was Craig Woods with his gorgeous Whiskey Golem. Sadly I didn't get a picture as I was rushing around during lunch but it looked amazing, as did all the entries. It was a really high standard contest and everyone's entries looked great.

For the Best Sport we had Karl McConnell who is starting to make a habit of being in the running for these awards. Not sure why.....(I kid I kid!). So well done to him as well, despite struggling with a bad back all day!

Finally we had the gaming prizes. Starting with the medal for Best Loser we had my 3rd round opponent Nick, who seemed thrilled with his medal and promptly put it round his neck. He told me later he'd had a really fun day and was planning to come down to the local gaming nights more often so it'll be good to see him at more events in the future. 3rd place we had one of the local guys Steve Wilson, 2nd place was the ever lovely Stuart Snares (even if we did give him a bit of abuse about it, all in good fun!) and our overall winner was Rich Bream, another local lad who has been using Neverborn recently.

In summary, I can highly recommend the events at Warzone Workshop. The shop is in Northampton town centre so there's plenty of parking nearby and it's not a terribly long walk from the train station, which gets a regular service from Euston for all you London type people. I had a lot of fun and I'm hoping to be able to come along and help out again someday (hey someone has to get Ben to events on time :p).