In June 2015, about a year into my time playing Malifaux, I wrote an article where I took a photo of all my painted Malifaux. A year and a half later and I thought it was time to provide an updated cache of photos of my painted Malifaux. This will be a bit less wordy than my usual posts... so here we go!


It is crazy to think how much I have painted since then...
Now let's start breaking that giant photo down a bit..
When I last posted my painting progress I had only painted 3 Masters (Dreamer, Zoraida and Pandora), now I am to 10 inc all 7 of the original Neverborn. 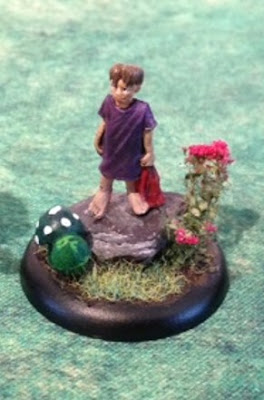 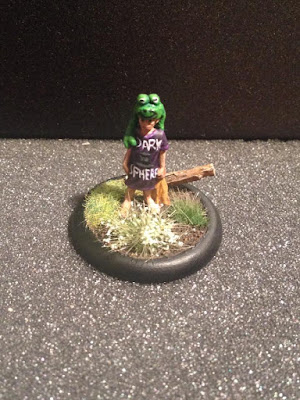 Dreamer is by far my most played Master and the reason I started playing Malifaux, however, he was also one of the first models I painted... and it showed. He had also broken off the rock he was standing on several times, and I decided it was time to strip and repaint him. Since he was my favourite character in Malifaux I wanted to make him look more interesting. Therefore I decided to redo him in time for 2016 Masters. I sculpted a Greenstuff hat based off my own froghat and also painted him in my own Dark Sphere/Abnormalifaux shirt. Really happy with how he turned out.. even though I have sadly played him far less since the new paint job (too many cool masters to try!)

When I last did one of these posts I basically only had Neverborn and some Mercenaries painted.. now I have some (small) other factions painted. The gremlins here are a more recent addition to go with Zoraida. I picked up most of them 2nd hand for quite cheap and did paint most of them a fair bit quicker than some of my models. Too bad Lenny will never see the table again now... at least he had a good 7 game run with Ophelia this year. Also I've lent out two roosters to Eless (for Nationals) so they have been left out of the above photo. Instead I've attached a couple shots of them below (rainbow rooster is definitely my favourite). 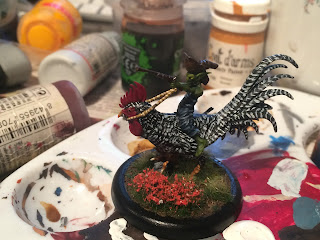 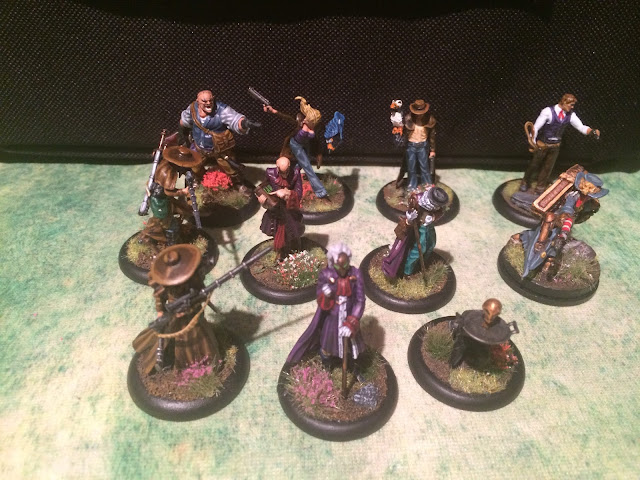 I have played 0 games with Guild, but have a little collection of them now just for Lucius (and the effigy for Collodi). I would also just like to say how excited I am by the Lucius/Scribe erratas as I love the models and am excited to get them on the table even more now. Still doubt I will ever use Dashel though. 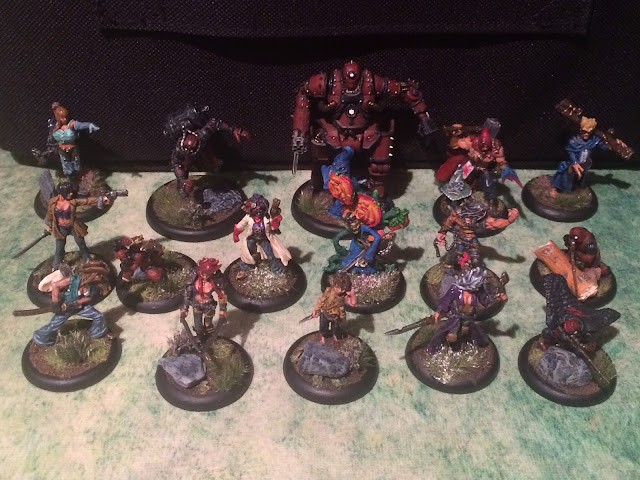 Outcasts are definitely my most used painted models outside Neverborn, not just because they have a bunch of Mercs. Viktorias are also tied for my 4th most played Master and the only one in the top 8 that isn't at least dual faction Neverborn. They also include some of my oldest painted models that weren't painted in time for my June 2015 post, specifically the Viks themselves. Shrewd viewers will not that I have repainted Lazarus to match my other deadpool themed freikorps. The original model in the 2015 post was painted by Joel (who gave me the model) and I finally got around to painting it myself some time last year. My two most recently painted malifaux models (hodgepodge effigy and Ronin in the white jacket) are also in this picture, so it is a nice mix.

Now on to the main attraction (Neverborn)! 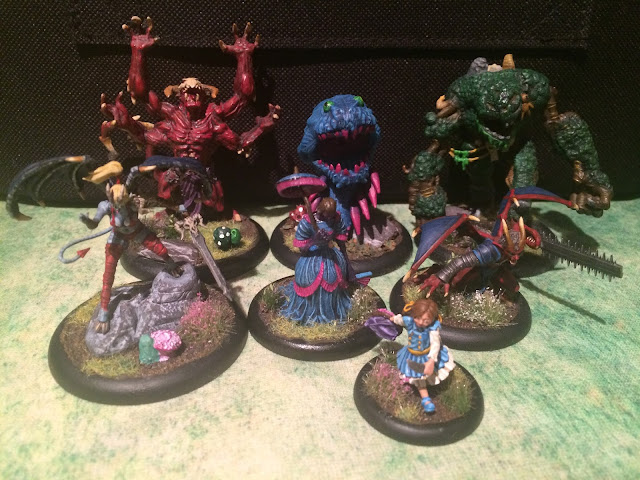 I am not going to bother posting a photo of my neverborn masters as I already took a photo of all my Masters earlier. So let's start with the henchmen! Five of these seven models were actually painted in time for my original fully painted photo in June 2015... but I've added Candy and Barbaros.. who occasionally see the table.. 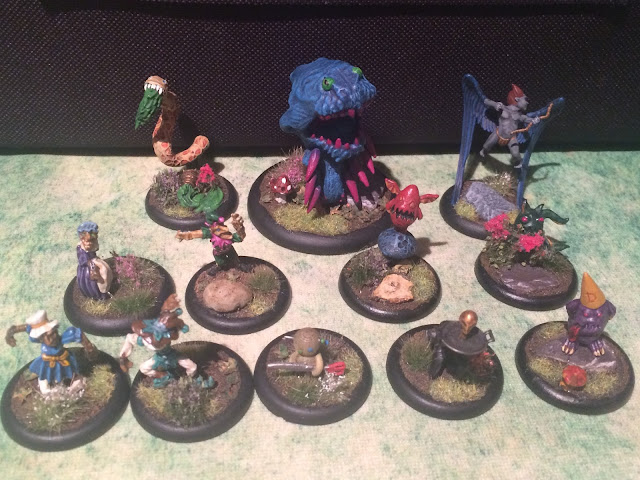 Totem time! Neverborn are really lucky to have some great totems, both models wise and rules wise. I am particularly happy with my voodoo doll and scribe paint jobs. 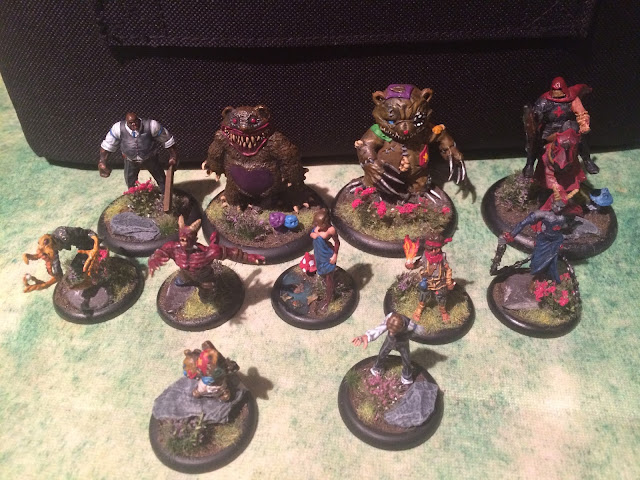 TEDDIES! Oh and other enforcers too I guess. Again a lot of these were painted last time, but I am very happy that doppelganger is one of my better paint jobs. Especially since she is pretty much always on the table :D I also like the matching pair of Tannen and Graves... more from a painting perspective than on the table tho. 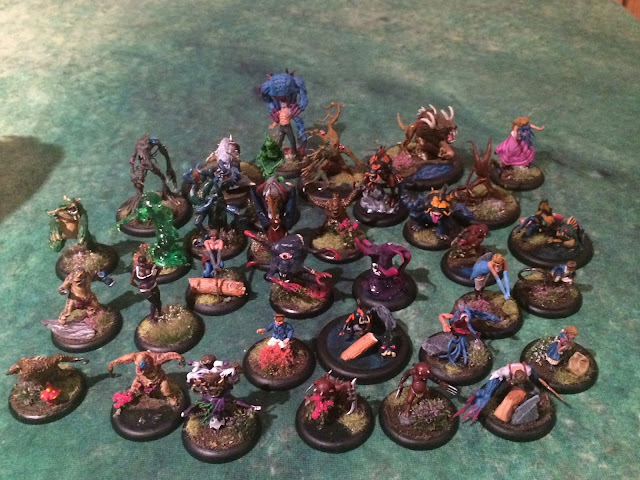 And finally the minions. When it comes to my Neverborn this is definitely where the majority of my painting has been in the last year or so. I have added a lot of options and honestly have used every model in this picture at least once in the last year. Special shout out to the mysterious effigy who has become a key member of many of my crews since I painted him. Didn't rate him when I started playing Malifaux and I was clearly very very wrong as he is prob one of my top choices now. Also the big undead dogs on 50mm bases are my Rogarou proxies.

I think that covers it. Hope you enjoyed the pretty pictures. I will hopefully be finishing up some 2016 review posts soon and then will try and nail down some 2017 resolutions. Looking forward to another great year of Gaming!