I met her in a club down in old Malifaux... 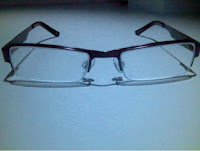 So one of the bonuses of starting a new faction is that I get to paint a new faction, and it also means I finally have an excuse to paint my Dark Carnival crew.

First step was building and tidying the carnival folk. You'll notice there are no pictures of this step. That's because it's hard to take photos while you are curled up in a ball on the floor sobbing about gap filling the middle of a monkeys face. I'm fairly sure that the "Dark" in the name Dark Carnival comes from the place where the sprue designer was when they made it. 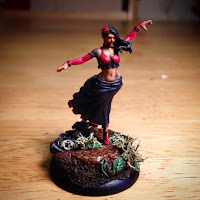 So built, cleaned up, washed in middle aged tears, and primed. Next step was thinking about how to paint them. This went back and forth through hundreds of different ideas, from monochrome to sepia, vampiric to flamboyant, oriental to Aztec. In the end I decided to just work off my alt performers style and go from there.

The alternative performer is painted around the idea of a rockabilly flamenco dancer. 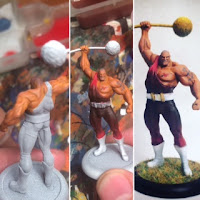 The first of Coopers models that I painted was Mercury, the strongman.
A nice bronze skin tone seemed to fit the model and worked as a nice base for his tattoos, tattoos are something I keep trying on models with various levels of success. Merc has four, three of which I'm happy with the fourth I can live with even if it not great. 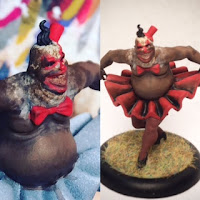 Next up I worked on Lola, the crazy clown of the posse. I decided that if I was going to paint a creepy clown I had might as well go full creepy. I start with the skin again this time something darker as I wanted to have a clear contrast from the makeup.
For the makeup I wanted it to have a worn and weathered look so I looked at a few simple Mech
weathering techniques and worked from there. I painted the full makeup first as neat and clean as I could ( I almost stopped here and it looked good) next I got a sponge with a small amount of my midtone skin colours and dabbed over the makeup which with a bit of trial and error gave me a nice worn effect. 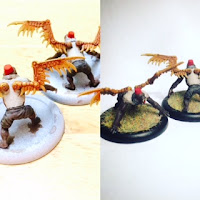 Next up was the winged chimps, the fur I tried to go with a two colour look to give them some life but the main focus of these is the wings. I tried to get a worn down old brass look to them. The fezzes I tried to make nice and bright as I think that's a lot their character.

Cooper himself was always going to be the biggest job. I wanted 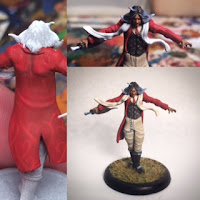 plenty on little details on him without looking too busy. So I opted for same colours patterns where I could stretch my freehand attempts.
I also added an umbrella I had sitting in the bits box to make him a bit less flat when viewed side on. The patterns on the back of the coat I'm particularly happy with as the aren't too flashy but give it a vintage look.


The next in the queue is Thin lizzy and the mannequins which are almost finished, so hopefully by the next post I'll have a completed group picture to show you.