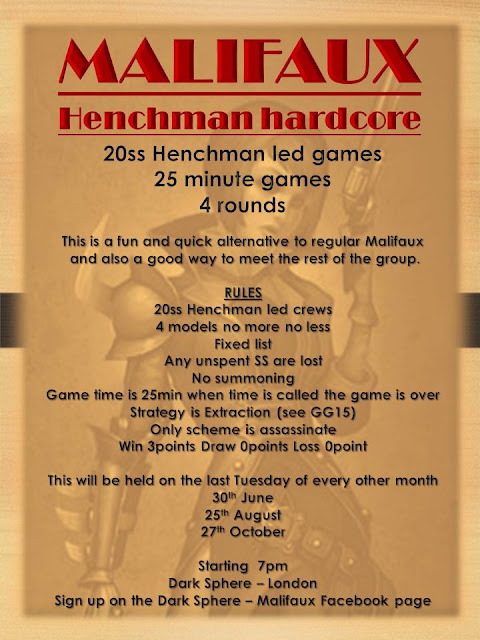 On Tuesday night, our typical Malifaux night at Dark Sphere, Peter ran a Henchmen Hardcore event which ended up with 10 players. I was going back and forth between two lists but decided to go with Neverborn rather than Outcasts. For reference, the Outcast list I would have gone with was Taelor, Bishop, Johan and HodgePodge Effigy. Instead I went with Hungering Darkness (Aether Connection and Addict), 2 Illuminated and a Depleted. The plan was for the depleted to tarpit and/or just sit there going defensive and scoring the strategy while Hungering Darkness put out Brilliance for the illuminated to take advantage of. With Aether Connection and a 5 soulstone cache Huggy could tank really well, especially against non-casting actions. There were four games each and my first game was against again fellow blog contributor RelaxedDave. 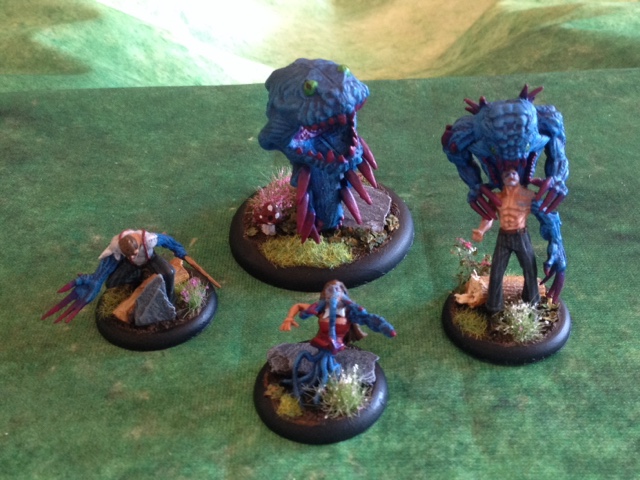 Started the event on table one, which was nice because it meant if I could keep winning I'd never have to get up and move my stuff. Turn one we both basically rushed our models further towards the center. My illuminated walked around the corner and hit a witchling stalker for a few damage. The executioner was moved up by the Judge and then charged and killed my illuminated. Huggy ten obeyed (Heed my Voice but Obey is quick to type so will refer to it as obey) the executioner to hit and kill the witchling stalker which exploded, doing two damage to the executioner and the Judge. Turn 2 I won initiative and charged through my Illuminated/depleted (who were bodyguarding Huggy) into the Executioner. I stoned for a ram to make sure I hit the min dg 4 and killed the Executioner. Then the judge charged Huggy and thanks to incorporeal, aether connection and soulstone prevention Huggy emerged unscathed. I charged the lawyer with my illuminated but Dave ditched two cards to make both of my attacks on negative flips so the lawyer was fine. We each scored a point but I got to move the extraction marker a bit further back so the lawyer was out of range. Turn 3 I managed to kill the lawyer with the illuminated and therefore was able to deny a vp. Huggy and the Judge ineffectively hit eachother and the depleted continued to do nothing but stand in the extraction bubble. By killing the lawyer right before time ran out I won 2-1 and would remain on table one for the next game.

I won 2-1 with neither of us scoring Assassinate.

The rogue necromancy was a great counter to Huggy as it had a min damage 3 Ca attack from range. So I had to make sure to watch out for that. Other than that I wasn't too scared of my opponents crew and Ross decided to start the crooligan in the extraction circle, which also meant he was in charge range of an illuminated turn 1. So turn 1 I activated my Illuminated and charged the Crooligan, easily killing it. The belle then lured and pounced on my illuminated doing a couple points of damage. My other illuminated/depleted just shuffled forward. The Rogue Necro walked and shot Huggy, doing 3 damage but I prevented 2 of it (thanks to aether connection). Huggy obeyed the Rogue Necro to walk away and then walked the other direction towards Toshiro. Toshiro then charged and killed the illuminated that had been weakened by the rotten belle. Turn 2 the rogue necro had to go the long way around a terrain piece I'd put him behind to try and get back in the fight while my second illuminated/Huggy killed off the rotten belle. Rogue necro did get in the far end of the extraction circle (nowhere near the battle but enough to score). Turn 3-4 are a bit of a blur but overall the illuminated and Huggy killed Toshiro (I believe one of them flipped the red joker on damage, which tends to happen to toshiro a lot as you are usually flipping 4 cards for damage). Rogue Necro couldn't really catch huggy until it was too late. Game ended with my denying his final extraction point as noone but the Rogue necro was alive. Once again the depleted did nothing but sit in the extraction zone.

I won 7-3, scoring assassinate and denying his final Extraction point.

Another game against a player I recognised but had not yet played against. Once again seeing an Executioner across the table, but this time it would be a lot harder to hit thanks to El Mayor. Again I ended up charging and killing an enemy model turn one (this time the stalker) with an illuminated which was then immediately killed by the Executioner. I obeyed Francisco to walk back away from extraction circle to get him out of el mayor range for the next turn. The next turn I charged the Executioner with Huggy, who killed it on the charge and an illuminated charged the Pistelero (though I believe he didn't go down until the next turn as my opponent did manage to get two points for extraction. Francisco couldn't do anything but double walk to try and get back in the extraction circle to score a point. Turn 4(I think) Huggy and the illuminated combined to kill off Francisco (the illuminated being 4/6/7 with + attack and damage from against the Brilliant francisco made it tough to stop.) This was a fairly simple game as once again the combination of Huggy charging a big model and an illuminated charging in to finish it off worked wonders.


I won 6-2 scoring assassinate and tabling my opponent but not getting to the the final turn in time to score my final extraction point.

This game started quite a bit late as there was a bit of a rules mix up. Darren told me he had a cache of 7 and I immediately knew that couldn't be right because all the henchmen equal 13 stones when you add their cost to their cache and the Valedictorian costed 10 ss. But his card said that his cache was 7, which I was convinced was a misprint. After consulting the rulebook and TO Peter's ressur card it was decided that the cache was in fact 3ss like I expected and we rushed to get playing. I was worried about facing bete noire and her defence 7 since all of my models were at ML/CA 6 so if he had a good enough hand I wouldnt be able to kill him.

The game started with him sending the Valedictorian up my right flank. I responded by moving everything over to my left flank and avoiding it. He lured in my illuminated who was then flurried and killed by a punk zombie (but not before he did a bunch of damage to the rotten belle). Huggy stuck himself in, finishing off the rotten belle and doing damage/giving brilliance to the punk zombie. Bete then charged Huggy but due to her terrible min damage and my incorporeal/soulstone use she did no damage after I burned two soulstones (leaving me with 3 left). Finally my illuminated charged and killed the punk zombie thanks to all the plus flips and min damage 4 from it being brilliant. We each scored a point for the strategy but I could to move the marker to where it was outside of 6" from bete for next turn. The final turn (since we ran out of time) ended with my killing bete just as time was running down to deny him being able to walk her and end the game in a tie. Illuminated missed both attacks, but Huggy managed to hit for 4 damage and kill her (I believe I stoned for min dg 4 trigger. Again I didn't score assassinate as the Valedictorian was outside of the battle for most of the game.

I won 2-1 with neither of us scoring Assassinate.

Final Thoughts:
Had 4 really good games and other than Dave I got to play a bunch of new players who I hadn't faced before, which was great. My list ended up being far stronger than I thought it would be. The depleted didn't do anything. Noone bothered attacking him in any of my 4 games so I never got to use him as a brilliance bomb, but at the same time he did his job of scoring the strategy and not dying so can't really complain. The illuminated were fantastic. One of them was dead by turn 2 in every game but always either killed a model or almost took one out before they died. The second illuminated was usually in clean up mode and destroyed everything that Huggy but Brilliance on. In fact every single game ended with me having Huggy, the depleted and one illuminated left.

That is all a preamble though to the MVP of the event, Huggy himself. What. A. Beast. I couldn't believe how tanky he was. In one game I got red jokered on the damage flip and left with 0 damage from it. It did 7 damage which was 4 after incorporeal and I flipped a severe on the damage prevention which, with aether connection, meant that he took no damage. Wow. Killed loads of models as well and if there was a model he couldn't kill he could but brilliance on it and allow a super tooled up illuminated (thanks to Addict) to come finish the job. I don't think Addict was really necessary, but Aether Connection was one of the key's to winning the event so it will stay. I think once the new starter set is out I may try dropping the depleted and Addict to add a bloodwretch. Those things are vicious for 5 soul stones.

Playing extraction instead of turf war was a nice wrinkle Peter wanted to try and I though it leant itself to a more tactical game. Was very easier to deny your opponent points without just having to wipe him off the board. By engaging my opponent early and obeying a model away from the circle (or killing a model) I was able to grab control early by moving the marker further back into my zone and forced his models to waste AP walking closer towards it. In the end I had a great evening and it was a nice changeup from the usual 50ss games. Thanks to all my opponents for the great games and thanks Huggy for being damn near impossible to kill.