A statistical look back at my Malifaux games in 2016

So last year I did a statistical breakdown of my 13 tournaments. This year I only attended 6 events AND I actually decided to track the details of all my games, not just tournaments. In the past I only tracked my W/L record and which master I was using. So here is an article that is gonna look at my factions/masters, which schemes/strats I took, what my opponents ran, etc. I also will make some comparisons to last year (mostly in what I ran). Hopefully this is interesting for someone other than me, but I always quite enjoy the statistical breakdown pieces anyone posts.

First off I'm gonna start with a little comparison between the factions/masters I used in 2016 compared to my first 1 1/2 years of Malifaux (2014-2015). Prior to 2016 I'd only played a handful of games outside of Neverborn (all with Viktorias). 2016 I failed at my goal of getting the rainbow badge, but did branch out of Neverborn more than every before. In 2014-2015 I used Neverborn in 95% of my games. In 2016 that was wayyyy down to 58%. Even I was surprised to see that Gremlins was my 2nd most played faction, but there ya go. 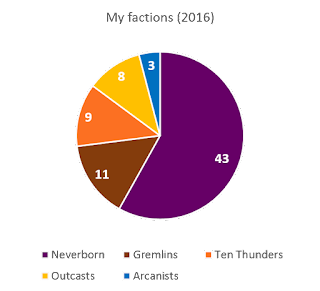 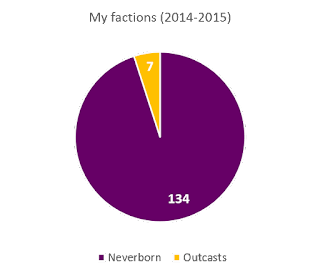 I also had a much closer spread between the Masters I used. Instead of Dreamer being miles ahead of everyone, Collodi was my most played master in 2016 by a mere 3 games over Pandora. Collodi was my least played NB master prior to 2016 and my most played in 2016. Interesting note, Shenlong was at 0 games until December and was my most played master that month by a lot (5/6 games). I also played Viks quite a bit, but 6 of those games were Jan-March and the other two were in late Nov so I dropped them for a good portion of the year. Outside of Dreamer, the biggest drop off from 2014-2015 was Lilith who was used 16 times in that period and then only twice in 2016. Not sure why, I just didn't click with her like Dreamer or Pandora.. Pandora was the most consistent master in the two comparisons as she ended up 2nd most played Master in both. Doubt that streak will continue into 2017 though as I have a lot of Masters I want to try. 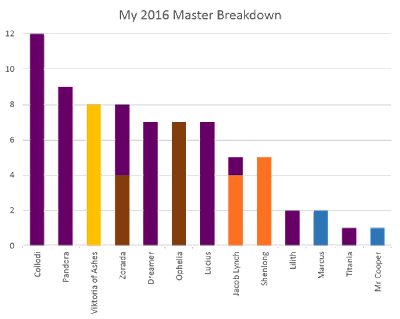 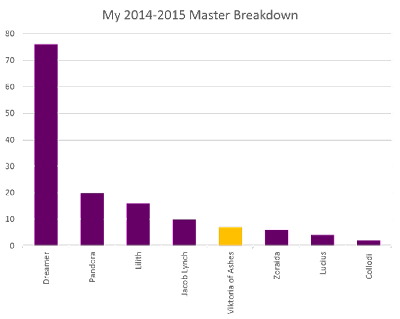 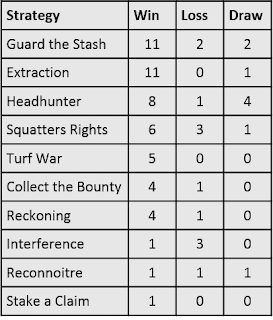 Moving on from what Masters I was using, let's look at which strategies I did well (or poor) on. Also crazy to see how rarely some schemes came up compared to others. I actually didn't play Stake a Claim until my 2nd last game of the year. Clearly I did well at the scrum in the middle games. My record in Squatters was far worse than in previous years for some reason. Did better in Reckoning than usual. And again I suck at table quarters.. probably cause I dislike them so avoid playing them as much as possible, but I definitely need to get better at those.


Moving on to Schemes, I was surprised to see how rarely I took convict labour. Though was still probably more than I ever took Line in the Sand... I was also surprised how often I took hunting party, as I would've guessed that Exhaust was my most taken scheme. My most succesful scheme (on average) was Detonate which I never failed to get full points for (probably why they've made it so much harder in GG17). Inspection, Occupy and Catch and Release I barely ever took as they are all too intensive of resources IMO. My two worst schemes were Frame for Murder (which is gonna come up a lot more now) and Take Prisoner. Turns out I don't like my opponent having that much control over how I score my points.. I'm honestly surprised I took them as much as I did. My most taken non-suited scheme was Entourage. Which doesn't surprise me as NB have loads of Masters that can do it easily and I am very comfortable with it. Though had a few occasions when I lost the target early and got 0 for it.. 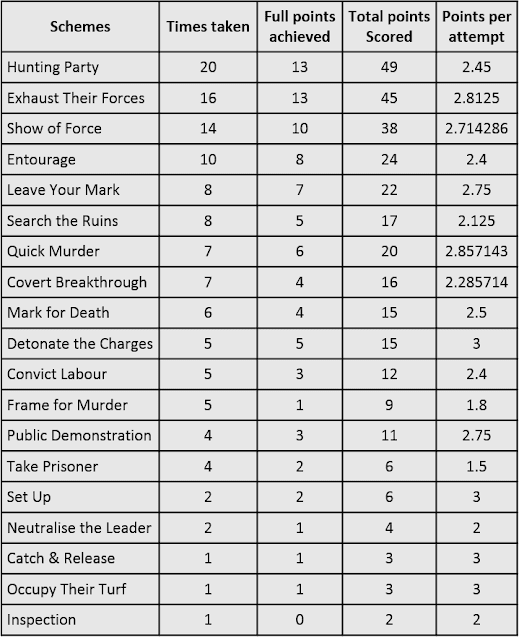 Finally let's take a look at my opponent's factions/masters. It felt all year like Gremlins and Guild had swapped from when I started Malifaux with Guild joining the TT as the least played faction and Gremlins being everywhere. The stats kind of reflect that but I was also shocked how much outcasts I faced. 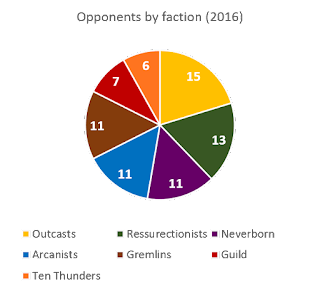 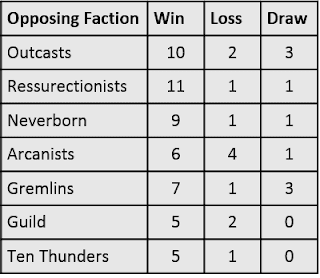 Considering I barely face Ressurs outside events and think they are one of (if not THE) strongest factions I'm surprised they were the faction I did best against. Also surprised my most losses were to arcanists, a faction I've probably faced more than any other in Malifaux. Outcasts were a more mixed bag, as I did quite well but still had some tough draws/losses. My poor record in the past vs neverborn was largely reversed, though that could just be the fact that I faced less Dreamer.

Finally looking at my opponents Masters provides some interesting notes. Namely that although I faced 2 fewer games against Ressurs compared to outcasts, I faced 6 Ressur masters compared to only 3 outcasts. Also interestingly all my games vs Parker were casual games whereas the other two I faced in both events and casually. The only Wave 4 Masters I didn't face were Titania and Sandeep. I also finally got my first ever games vs Hoffman and Mah Tucket. Only Ulix and the previously mentioned wave 4 masters left to face now. 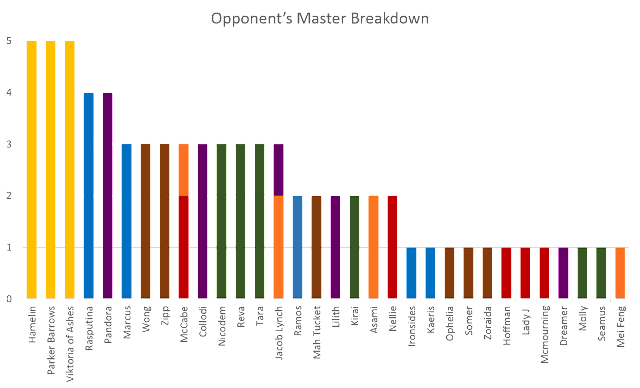 I think that about covers it. Let me know if you have anything else you'd like me to add to one of these posts in the future!