Sorry, totally Zoned Out there...

While my intrepid teammate Dr Walnut had headed off to Wayland to take part in Lost Love, I was braving the perils of the Midlands to help TO the second event at the brand new Warzone Workshop. Normally this would require the special kind of hell that is the British train system but luckily for me the very beardy Stuart "Snezzley" Snares had offered to give me a lift. Huzzah!

We ended up with 26 players in the end out of an estimated 28 - sadly Mr Battrick had been unable to make it due to bad weather in his area but hopefully he'll be able to get to the next one! It was lovely to see people who had travelled from a few different places, as well as some of the Warzone locals we also had a large contingent of Squigs (including THE Joel Henry), 2 of the Tractor Massive (Mike "Lord of Malifaux" Marshall and Spooner) and then Snezzley who in a move that was either brave or foolish had made the drive from Kent to Northampton. Loon!

We had a very easy and fun journey up to Northampton, managing to get there a little before the stated start time of 10am. As the Warzone shop is on the small side, Karl & Ben had annexed the cafe across the way which had the added benefit of being able to serve hot drinks to any players who wanted them. A bonus when you're playing at an event in February I feel.

We got underway with our 2 unfortunate drop outs and Ben used the very cool Bag O Tools software to get the first round draw done. In possible the most malevolent display of artificial intelligence since Skynet, the software decided to pair Matt Spooner with Joel Henry. I'm not ENTIRELY sure but I think Matt was a bit annoyed. In fact, I think he might have said a bad word or 50. Of course everybody else found this incredibly funny was very sympathetic to Matt.

Round 1 was well underway and Ben and I got down to the most important job of a TO, walking around making sure everyone was OK. Alright, we were heckling and tweeting at the same time but it still counts. It was a very giggly atmosphere with lots of banter; Ben managed to walk past Rich Bream as he drew his hand which ended up with a coinspicuous lack of both high cards and crows (not ideal when one is trying to play Ressers), I made Mike Marshall sad by lending Graeme my Burt Jebson after his broke and Mike got all exctied thinking it meant Graeme couldn't field Burt against Mike's Nellie crew and then I wanded over to watch a later turn of their game and Graeme instantly managed to get the To the Kneecaps trigger on his Lightning Bug's attack. Oh the irony, it burns!

Lunch time rolled around and it was time to set out entries for the painting contest. This was not only a chance to check out the entries (in a 26 person event we had 8 entries and they were all to a very high standard) but a chance to play a bit of a joke of Graeme. I'd been painting his Titania crew for him (yes boooo Neverborn but it's a gorgeous set of models) and as far as he was aware they weren't quite finished. So it was a bit of a surprise for him to see them set up alongside the actual entries for the painting contest - the look on his face made it worth the little joke!

Round 2 timeand I was kept very busy making sure everyone was OK, trolling people and exchanging "witty" banter with Spooner, which is always fun. Also, in a stunning reversal of the usual meta, on the top tables we had people running Yan Lo, Zoraida and Ironsides - Masters that many people would consider to be on the weaker end of the power scale in Malifaux. I'm not sure that means we were doing Malifaux wrong or right...

Into the final round and probably the most interesting match on the top tables was Mike's Nellie crew vs Karl's Viks crew. In Close Deployment. I think Mike might have said a bad word or two. Can't really blame him, I'm not sure that's a crew I'd like to see across the table from me in Close Deployment! 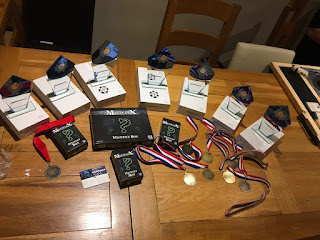 Luckily for Mike the game ended up going his way - in fact it went so well that by the end of Round 3, Mike had ended up in second place. But, there were a whole host of prizes to be handed out at the end of Round 3 so here's a full list of our winners.

Best Sports - Rich Bream (Rich had jumped from Neverborn to Ressers for this event in yet more proof no-one likes Neverborn!)

Best Painted - Ben Halford (1st), Craig Colley (2nd) and Matt Spooner (3rd). The painting standards for the competition were very high and this was definitely reflected by how close the voting was, I think there was only 1 vote seperating Ben and Craig's lovely entries.

All in all it was a really fun day in Northampton - Ben had everything organised really well so there wasn't a whole lot that I was needed to help with. The atmosphere was relaxed and very giggly (most of it at Craig Woods when we kept poking his neck to make him shriek, sorry Craig!) and I'd definitely recommend making the journey up there for the next one.
Posted by Eless at 10:00:00