As I did last year this year I'm planning on attending all the showdown events. They're a really fun series of events that have four events spread out through the year. They're run by the mastermind behind the UK nationals and are hosted at Wayland games (you'll notices a lot of my tournament write ups are based at Wayland this is partly due to them hosting plenty of events and partly due to it being easy for me to get to).

The Showdowns follow a set template of a 50ss, three round, relaxed event with plenty of piss taking and swag to keep people happy.

I drove down with the charming beanpole that is Francois "the Guild" Langton who took the risk of being in the car with me driving (spoiler nothing exploded but the was a slight overheating issue again).

As always first up was meet and greet, which involved a bit of hand shaking, hugging, and swearing, followed by registration using the very flash Bag O' Tools tournament system but we still queued up because we're British and it's what we do best.

I Played Dark Sphere local Ross Baker. I was using the coldhearted queen of Malifaux Raspi against Ross's pony riding Reva. The game was Guard the Stash using our very snazzy Snowdown custom mark (from Bendyboards).
Not a huge about of tactics to chat with this game as just moved models about while Reva killed EVERYTHING! This might be over simplifying things as Ross played really well, got his schemes locked down the strat every turn. I managed to scrap 3 vp to only lose 10-3. Not the best start but I've had worse.

In the second round I face a new face on the tournament scene, Jeroen who was playing Ophilia. I was still running Raspi (my Arc stable is a bit light at the moment). The strat was extraction.
This game went a bit better for me. The nice thing about extraction is blasts and ice pillars are amazing for funneling things into a killing field. I did use the practice production, raptor filth to score leave your mark but I only felt a little bit guilty about it.
This game finished up 9-4 to me (don't faint) it was a really fun game and nice to bank a win for the day.

The final game of the day was against another obscenely tall fella, Mr Bendyboards Battrick running Shen Long. The game was interference.
Not an ideal strat for Raspi so I settle for just trying to kill as much as I could. As a plan it wasn't perfect. Lee positioned really well to make sure he could score full points each turn and even as I threw killer snowballs at him he fed me enough chaff that it never really made the difference.
A third great game of the day.

It was as always a great, fun, but tiring day. I managed to just (very just) finish above Matt Spooner to keep the Arc17 dream alive. I end up at 31/39 so plenty of room for improvement.

If you want to see who won, lost, and all that technical stuff head over to the Malifaux ranking to check it out.

Big thanks to everyone who was there and Mike for running it. Also Wayland for supplying tea and
toys to buy. 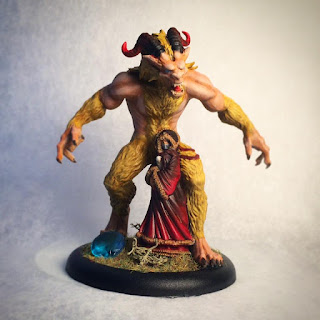 Now to start training for my next event April Fauxs Day.
Posted by Dr Walnut at 15:10:00