That's Mr Rodriguez to you

As I slowly tick off models on my Arc 17 list the next one is the mighty Arcane Emissary, or as I call him Rodriguez.

Originally big Rod was going to be painted like a hot rod black with red flames and lots of chrome, but one I had him assembled it became apparent that wouldn't fit. Most of the flat metal sections had a weathered texture or scratches to give him a battle worn appearance.
So instead I decided to go with the idea that he was pull together from the various machines and scrap nearby when he manifested.

First step was the flesh. I tried a different approach from normal here which I'll have to refine a bit before I use it again.
First I based in a purple, then heavy dry brushed a mid flesh tone over the whole area. This in theory broke 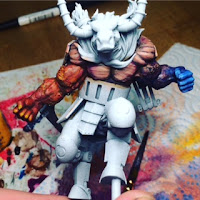 up the natural lines of the model while also adding a mottled texture to the skin.
Next I went over the flesh in a couple of lighter tones added the lines of the muscle.
Lastly for the flesh I painted the fists. The broken up nature of the arms was part of the reason I chose to us a different approach to the flesh as I knew I'd struggle to get a smooth transition into the arms but the purple base gave me something to play around with.
The fists are layered up from purple into red or blue then up to yellow or white to match. I then glazed the areas to smooth out the transitions.

Next up was the many, many metal sections on him. As I mentioned I was looking at Rod as made up of lots of different parts of machinery so I was free to play around with different styles, some working better than others. 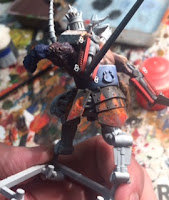 I did a steel waist piece, I tried to make the plates coming off the waist look like battered panels from a hot rod echoing back to my original idea.
The legs I wanted to look like something high tech and military (they are nowhere near as clean or smooth as I wanted them but I think the concept works).
The massive blades I'm aimed from plain with the thinking they had be torn from something agricultural.
Brass shoulder plates and copper chimneys add a bit of warmth and give him a bit of bling.

The head I tried to at least hint at the colour scheme for my arcanists so a black iron head with red horns seemed to fit. 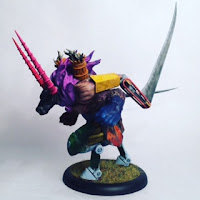 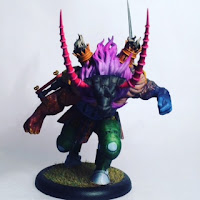 The mane is purple hopefully working with the purple under tone of the flesh and giving it a arcane magic feel while working it from light out to dark give a nice background for the face.

The base like the rest of my Arcanist is just flock while I try and find a basing idea that I like, which might tie in with when I finally decide on my display board. 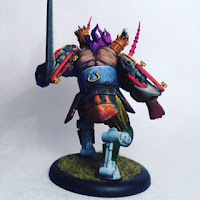 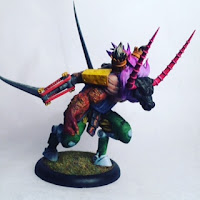 Thanks for reading while I pretend to know what I'm chatting about, next model in the queue is SnowStorm who while be back on theme with lots of black and red.