The Bayou's Most Wanted - Rooster Riders

Pretty much the first thing I did when getting my copy of Crossroads was to head straight to the Gremlin section to see what new and broken toys we were going to get to play with. And the ones that made me scratch my head the most were the Rooster Riders. Simply from a thematic point of view they just didn't seem to fit. I mean roosters? In the Bayou? Wouldn't the gators just eat them?! Then I read what they could do.... In theme? Who gives a damn when they can do THAT? So let's take a closer look at these guys and see if Eless get through a whole blog post without making a joke about big cocks.....DAMMIT. 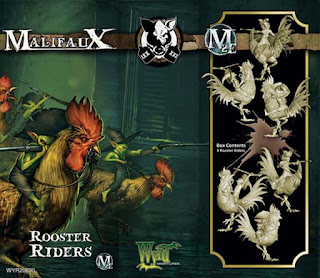 Rooster Riders are 6 SS minions and hilariously they have no Rare limitations which has led to some incredibly bonkers theoryfaux lists. They're also Wp4 which means that not only can all the Gremlin Masters make use of them but so can Zoraida in her Nerverborn guise. But on a brief glance at their statline, you could be forgiven for thinking they were a bit weak. With a Df of 5 and only 6 wounds they seem like a stiff breeze would blow them over, particularly when you take into account they have no armour, no Hard to Kill/Hard to Wound and no way to heal themselves. So they seem like they'd be quite easy to knock wounds off. And they are. But you might not be glad you did......

So looking at the front of the Rooster's cards they have 2 abilities which are fairly standard across the Gremlin faction - Reckless and Bayou Two Card, the latter of which allows you to cheat Fate with the top card of your fate deck instead of a card from your hand. A fun ability that fits well with the whole "FUCK IT! What's the worst that can happen?!" attitude of Gremlins as a species. But the real beauty of the Roosters come with their other abilities - Roostercharge and Rampage. Rampage works pretty much the same for the Roosters as it does for the Warpigs - when the model has 2 or fewer wounds remaining if it declares an action then it must declare a Charge against the closest legal target it isn't already engaged with. The charge can be made while the Rooster is engaged and receives positive flips to both the attack and damage flips. This is both awesome and terrifying depending on where the Rooster is when this ability comes into play. If it's in the middle of your opponent's crew then it has the chance to do some serious damage. If it's in the middle of your crew then some quick thinking might need to be done to get your own models out of the range of a very pissed off chicken.


Roostercharge is where we start to see the magic happen. It allows the Roosters to charge for 1AP instead of 2. So when taken into consideration with Rampage you've suddenly got a model that MUST declare a charge and can do so for 1AP. So you can get to 3AP with Reckless (although if it's already on low wounds this may not be advisable unless you REALLY want to kill something) Which means you can Charge, take 2 attacks and then for each subsequent action you declare it must be a charge (if there's a legal target) which generate another 2 attacks each. That's going to be enough to kill or severely hurt the majority of models, although the damage doesn't ignore armour or abilities like Hard to Kill, mostly because any attacks made as a result of a charge from a Rooster on a Rampage gain positive flips to both the attack and damage flips as I mentioned previously.

There's one more layer to this cake of awesome and damage. Their 1AP melee attack is Beak (this shouldn't come as a big surprise to anyone, they're big birds after all) and it has a decent damage track of 2/4/6. While this might seem fairly average, the Trigger (which must be declared if you flip or cheat in a Ram) is amazing. The trigger is Stampede and once this goes off the Rooster suffers 1 damage and must charge the closest non-Pig target that it is not engaged with. This charge can also be made while the Rooster is engaged. Annoyingly (or thankfully depending on if you're the one facing the Roosters or not) this Trigger can only be declared once per activation.

So what's the point of all my confusing ramblings about charges and positive flips? The point is that these things are INSANE. Given the right set of circumstances you can set them bouncing among the enemy crew like a crazed ping pong ball of pain, death and squawking. Go Reckless, charge something for the first AP, hit a Ram trigger on the second attack for a second charge and 2 attacks against a different target. Then, if you're in Rampage territory, charge something else with your second AP and make 2 attacks. Then with your final AP - one more charge generating 2 attacks. Keep in mind too that all the attacks made as a result of a Rampage will benefit from positive Attack and Damage flips. So if there are 2 or 3 enemy targets in range of a Rooster, you can make multiple charges between targets as long as you have the capability to charge while engaged.

Now this doesn't mean that the Roosters are perfect. As I pointed out earlier, they are low Wp models so can be easily Obeyed by an enemy master. Their Df is 5 which isn't terrible but combined with 6 wounds and no built in protection like Armour or Hard to Wound they're not going to go toe to toe with a big damage dealer for long. There's also the concern about them being damaged enough while in range of your own crew and having to do some damage control to get your crew out of the line of fire! But if they can get in first they can certainly wreck some face. I've been in a situation where one of my Rooster Riders managed to take a Hooded Rider down to it's last 2 wounds in one activation - which Mah Tucket then gleefully removed with a big spoon immediately after.

For me personally, I like Roosters with Mah Tucket (giving them the option to ignore Severe Terrain or adding 1 to their Melee stat with Chores? Yes please) and also with Ophelia, just to complement the great ranged attack of her crew. I'm not sure how well they'd fit in with Brewmaster, Wong or Som'er but I can see Zoraida having some fun Obeying them around, although I have been told this is tricky due to them being so damn fast. But it's something I'd like to test for myself in the future when I start looking at options for a Zoraida crew.

So to sum up. Roosters are fast (a Wk of 7 and a Cg of 7 make for quick little buggers) so they can be used as scheme runners in a pinch. But I've found that they're a bit wasted in that capacity, very easily picked off if they're left in a vulnerable spot. It's only in my last couple of games that I've clicked with how I like to use them - they wade in against something that you need dead and they try their best to make that happen. I think they're great. The abilities all work together really well (they have a shooting attack as well but compared to the melee capabilities of these models I've not used it much) and they're just hilarious. There's something so gleeful about annihilating a model or two with a chicken that'd make Colonel Sanders cry in joy. And for me, that's not a bad thing.
Posted by Eless at 09:30:00

Email ThisBlogThis!Share to TwitterShare to FacebookShare to Pinterest
Labels: Bayou's Most Wanted, Gremlins