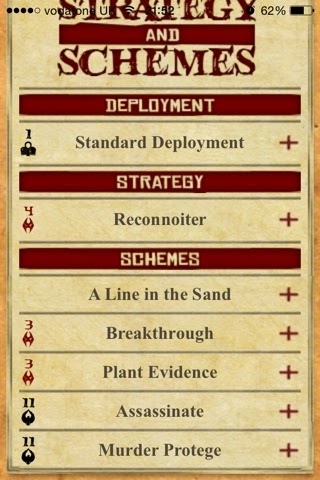 Crew Selection
So after declaring guild and seeing the stratagies and schemes available I had to try cobble together a crew. Now it's worth mentioning I'm far from an expert at this game so think of this as an example in what can happen instead of a lesson in what should.

So when choosing a crew I start with the strategy, first choosing a master that can handle the strategy and then adding what they need to work. In this case that was Sonnia, good table control, consistent damage output and a summoning ability all seemed like good skills to have for recconitor. To compliment this I added 3 witchling stalkers and the faithful Samuel. This would be my main crew with a focus on burning and damage dealing to control the table quarters.

Next up I looked at the schemes with the Sonnia and friend being on the slow side I aimed for scheme that involved a minimum amount of walking. In this case line in the sand and make them suffer.
To help add a bit of mobility I also included 2 death marshals and the alway great Lone Marshal. 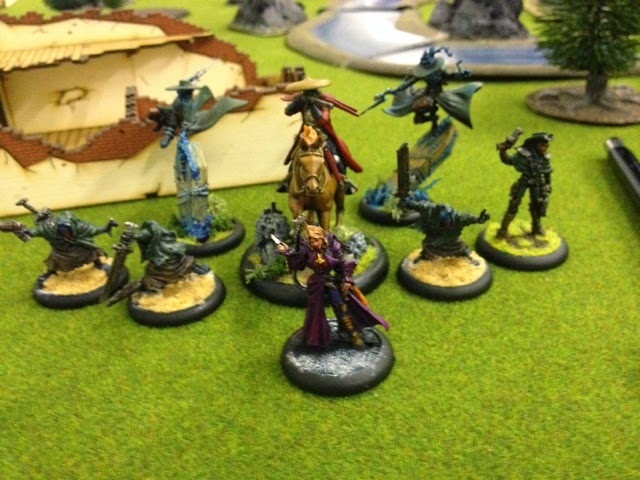 Final part of the hiring phase for me is upgrades. For Sonnia Cheafe imprint to give me a flame wall to throw around and reincarnation to summon in some more stalkers later on. Samuel had lead lined coat to try and reduce his glass cannon-ness. 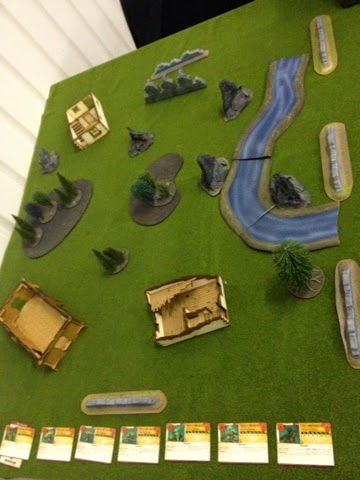 Insidiously Mad here! I'm using another colour for my comments so this joint battle report doesn't get too confusing. This is the list I took:

I wrote a little article describing how I came to this list and rather than posting it as it's own article I will just drop it here in the introduction to the battle report.

My Pregame Thoughts:
Playing Vik’s in Reconnitre necessitates the ability to wipe out your opponents crew. You are not gonna have many models so it is very important to be able to remove your opponents crew quickly. Luckily the Viks do that incredibly well. Also with Make Them Suffer in play, the Viks should be able to score a point a turn just by slaughtering minions. I went with the upgrades I did because I wanted to try out the Blood Vik missile at its most deadly. To run the missile, SS and SoS are mandatory as it is what allows you to get Vik of Blood in place to launch off into the enemy before they can react. SoF was added to make the missile as destructive as possible. MoS is an auto-include on Blood Vik, bringing able to ignore the majority of damage reducing abilities is too amazing not to take everytime. Finally I decided to go Oathkeeper on Blood Vik to increase the likelihood that I could take out any model in 1 activation. If SoF goes off and Vik cashes in her Oathkeeper you get 4 attacks. If they all just hit min damage that is still 20 damage. Barring untimely Black Jokers VoB should be able to take out basically any model in the game if she can get this off. I will aiming to take out my opponents Lynch pin model this way (likely their leader or Francisco) before moving on to focusing on taking out minions for make them suffer points.

Next I went with Vanessa because even with 7SS for prevention the Viks go down very easy with just 7 wounds. Vanessas job would be to stand on the center line healing them and drawing cards (via the surge trigger) Unluckily that would mean Vanessa would not be able to be contributing to Rec, but I just decided that was a sacrifice I would have to make to keep the Viks healed from a distance. I didn’t go with a librarian because I didn’t think there was any chance of her being able to keep up with the Viks. In turf war or squatters maybe, but not in Rec where they would likely be fying all over the board chasing spread out models.

I chose 2 Ronin as they are the only minion models I own for outcasts. If I had more selection I would likely have taken to Freikorps trappers instead as they can affect the game from further away. The Ronin would be tasked with holding my quarters for Rec and staying alive to stop him from scoring MTS. If things get desperate I can also sacrifice one of them to get 2ss, though this is dangerous with make the suffer in play

I took Johan as I thought there was a decent chance that Peter would bring Sonnia or McMourning. The condition removal could potentially be important. The main reason I took Johan over a third Ronin was because of his higher damage potential, being unable to give up points for MTS, and the fact that with Finish the Job he would be able to rush across the table and help me score Breakthrough.

Choosing between 10ss beaters I chose bishop over Taelor due largely to his speed. Rec means that things will likely be spread out and I wanted someone who could challenge multiple parts of the board during the game. He is also better for hunting down things hiding near the back of the board. This was the most unsure choice for me though as Taelor’s kills would count for MTS whereas Bishops wouldn’t. We will see if that ends up playing a big factor or not.
The toughest part of building this list was the battle between SS cache and Oathkeeper. I really wanted to put Oathkeeper on Bishop and Johan as well as Vik of Blood, but I just find the Viks really need as many soulstones as possible for damage prevention. Since I have little experience with them I decided to play it conservatively and go for a full cache rather than two extra oathkeepers and cache 5.

For Schemes I chose Breakthrough (announced) and Make Them Suffer (unannounced). Breakthrough is one of the easiest schemes in the game when announced as placing two markers near your opponents deployment zone is quite easy. Since I would be aggressively coming towards my opponent to stop him from getting into my zones this worked perfect with my plans. MTS is a great scheme for Viks as they both count for it and have incredibly high killing potential. My one worry was that I would kill too many minions in one turn without completely wiping them out, meaning I would stop myself from getting 3 points from it. Have to make a note to myself not to do that. So the game plan is to take out his lynch pin with the Viks and then use them to hunt minions while pushing up the board with Johan and Bishop to take out any hiding minions and achieve breakthrough. Vanessa would support with healing/card draw and the Ronin would try to hold onto my own quarter. Did it work? Read on to find out!

I split the crew into 2 groups Sonnia, stalker, death marshal and lone marshal on one flank and Samuel, 2 stalkers and the other death marshal on the other. Both groups were tucked away behind buildings and ready to go. 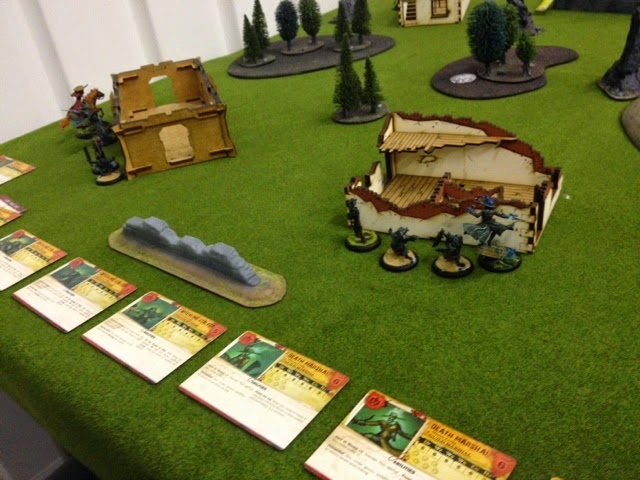 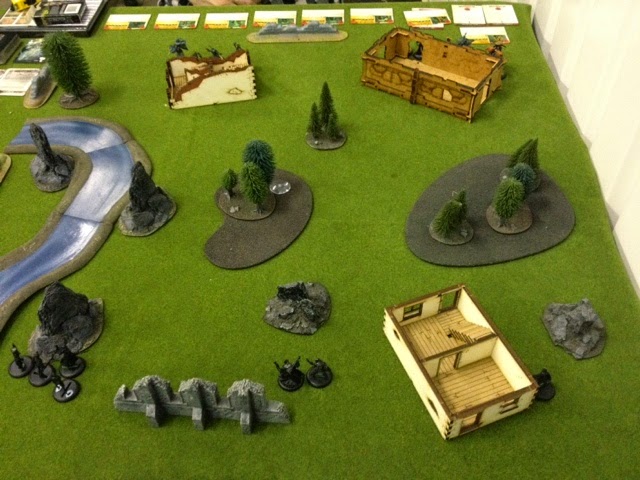 Most of the crew just walked up the board, the various marshals running up the edges while the witch hunters hung back a bit.
Sonnia got into position to flameblast Vik of b and land a blast on Vanessa aswell, couple of points of damage each  and turn end.

I lost int and paid for it.
I let Conor go into the how but Vik managed to reach Sonnia and slice her and a stalker up completely.
This hurt as Sonnia  was the linchpin of my whole plan.
Floundering slightly (panicking!) the stalkers and lone marshal took a few harmless pot shots while I tried to get Samuel in a position for some revenge. 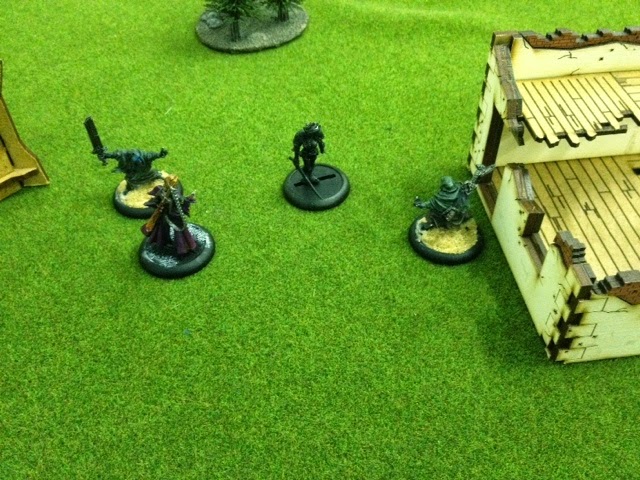 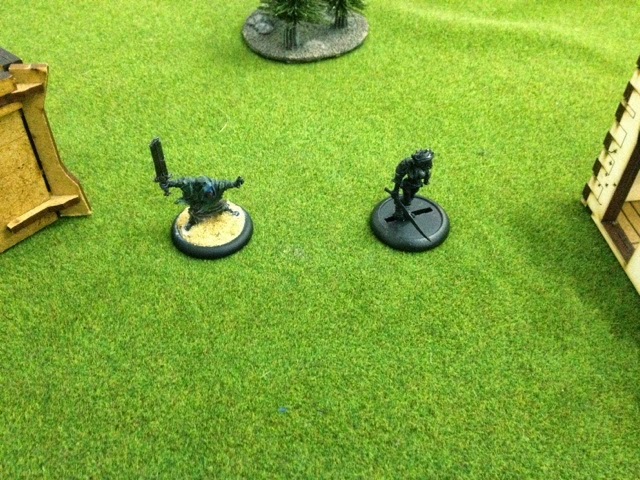 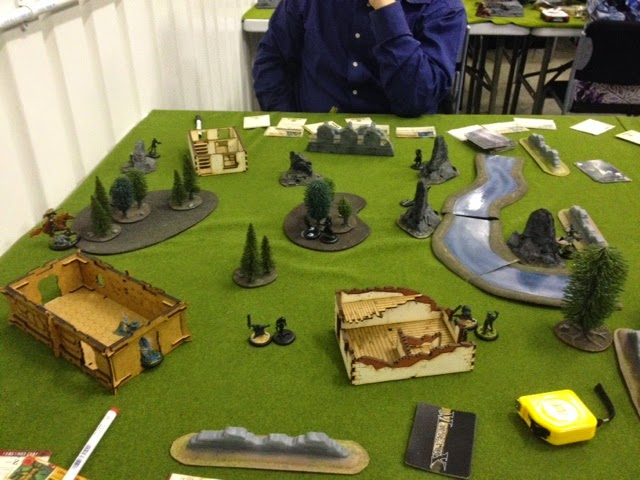 Turn 3
Final nails in the coffin saw the Viks kill off the stalkers and a Death Marshall and Bishop kill the lone marshal with ease. The stalkers managed to explode leaving the sisters with burning.
The burning meant that Samuel could try and claw something back so he proceeded to rapid fire into Vik (hench) 3 shots with a potential of fuck-loads of damage and he couldn't kill her.

I'll leave the rest to my opponent to explain as mainly it involves me getting smashed completely and I may of curled up in a ball sobbing by this point.

Thanks Peter! After Bishop took out the Lone Marshall and Vik of Blood took out the remaining models in his deployment zone (the stalkers, death marshall and a in turn 4 Samuel) the game was basically over. All he had alive was a death Marshall which managed to pine box Johan (seen below right before the incident) and run away to try and score breakthrough. The Ronin pictured actually sacrificed herself turn 4 to give me some soulstones to keep Vik of Blood alive. This Ronin's heroic self-sacrifice was actually my only casualty in the game. 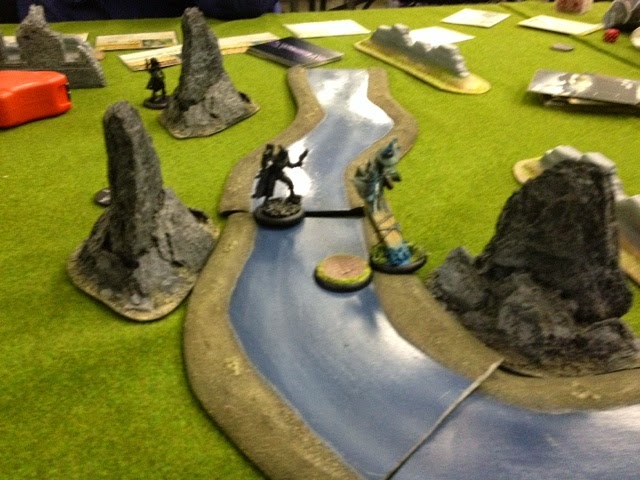 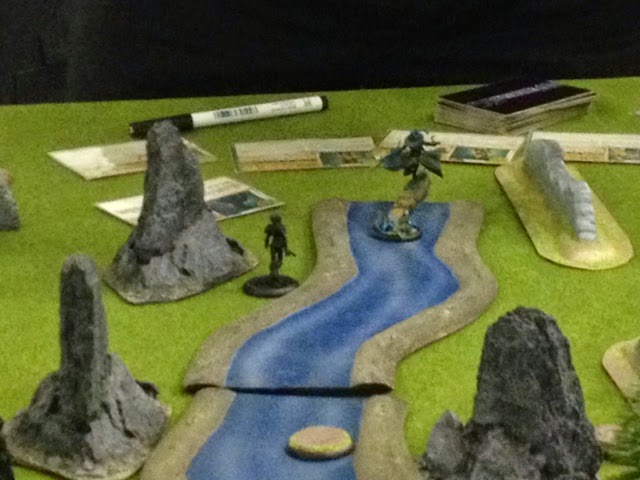 The game ended 10-2 in my favour with Peter scoring 2vp for the strategy on turns 2 and 4 but sadly nothing else. Back to you Peter!

Even on the receiving end of a massive defeat this was still a fun game, Conor as ever was a great opponent. Our different preparation and play styles should be evident from this report. He will learn his crew, plan his tactics and focus on what he's doing with each model. I on the other hand have a slightly more relaxed approach ( I mean bloody lazy) which involved picking a list I think could maybe might work and hope for a few lucky flips to score me some VP.

Now both of these approaches are great but only one will consistently win you games.

So I will try and be a more focused and prepared player and in a few months I will beat him because I am awesome (and because I will put four extra red jokers in my fate deck). Below you can see Conor's final thoughts

This game basically came down to the initiative flip on turn 2. I was far to agressive turn 1 and Vik of Blood had already taken heavy fire from Sonnia. If Peter won initiative there was a very good chance Sonnia could finish off Viktoria of Blood before I could do anything. However, if I won initiative I could burn oathkeeper to walk and then charge Sonnia giving me 3 attacks at min damage 5 (Sisters of Fury!) to take her out before she could do anything. This was poor play on both our parts as leaving the game so reliant on a single uncheatable card flip is a terrible idea. In the end I won the flip and the game was basically over by the time Vik of Blood was done activating, having killed Sonnia and a witchling stalker and being hidden from retaliation by cover. Was a great game playing Peter as always but was definitely not the best learning experience for either of us as me killing off Sonnia at the start of turn 2 turned the game into a massacre pretty quickly.
Posted by Dr Walnut at 10:00:00