Harlow is it me your looking for.

It’s been awhile but it’s time for a tournament report! (Waits patiently while you all recover from the shock)

It’s was time for my first Guild Ball event! About a month before I had managed to grab the last ticket for the very popular Harlow Homerun 3, this may have been a bit over eager on my part as to that point I’d played two games of season three and had one model painted of the Goldsmiths. But always up for a challenge (that’s a lie I’m never up for a challenge I’d prefer a nap to be honest) I grabbed a ticket, asked loads of questions, watched some YouTube videos, and painted late into the night to prepare myself for the big day. 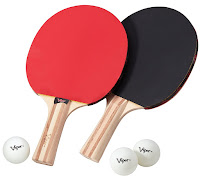 So morning of the event I had a nice lay in and a spot of breakfast before the very civilised twenty five minute drive to Harlow (who would have thought I could get the words civilised and Harlow in the same sentence?) this become closer to thirty five minutes as I missed the turn and got slightly lost.

The tournament was at the home of Harlow Games Club, which is in a table tennis centre. Up stairs
from the table tennis was a room full of Guild Ball pitches and players I didn’t know (which was oddly nice, going in with no preconceptions about anyone) I picked out the TO (which is easily done as all TOs have a slightly haunted look from dealing with idiot players like me) signed in and the settled in to nervously standing around waiting to start.

I have to say while mentioning the TO Matt (I hope I’ve remembered that right) that this was easily one of the smoothest run events I’ve been to, every thing seemed to flow fairly effortlessly from start to finish which is always impressive. 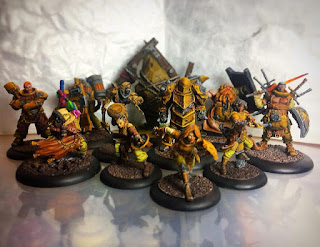 Furnace, Cinder, Cast, and Burnish were all on the bench.

First game was against a very patient fella called Brendon, who was great at talking me through set up as I got a bit muddled in places.
The game itself was fairly one sided but fun. I decided to ignore the ball and just try and punch things while the Fish jumped about bouncing off people and scoring goals.

In the time for Shark and friends to hit the post three times I managed to get one take out. The game ended 12-2 to the Fish and I some great feedback on what to work on.

A bit of time to kill due to a quick finish so got to look in on what the other games were doing and grab a tea. This game I was a bit less deer in the headlight but still needed a bit of guidance at points from Barry. Not the worst start this game as Iron and Sledge both managed to get charges into a butcher early and start smacking away. Barry's first goal run ended with a miss which gave me a brief chance. But by this point the Butchers had set up ready to take me apart. From the kick off I did manage to get the ball pass it up to Alloy and then get my first competitive goal. Then the Butchers returned the favour and followed it up with another take out and a final goal.

This game ended up 12-6 to the Barry's Butchers. Once again learnt loads and had fun.

LUNCH! Having noticed that there was no food available on site and that the weather said it was going to bucket it down, I packed a sandwich which I ate in the car like a saddo, but enjoyed the quiet.

This time I was up against Ed who was in possession of not just the Brewers but also a very impressive beard. 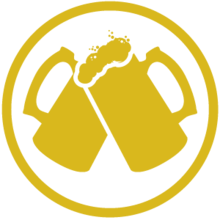 The Brewers managed an early goal followed swiftly by another, to counter this I threw everyone forward and got myself a take out followed by a goal.
This left things wide open for Mash to just slam home another goal for the win.

12-6 (again) to the Brewers. Ed was a pleasure to play and kind enough to talk me through a few things as we played which I'm sure when I recover from the weekend will be really helpful.

Final game! One the bottom table (my home away from home)
Blacksmiths V Hunters
I was facing off against Charlie's Hunters which looked absolutely stunning, the best looking team I saw that day and easily some of the most impressive basing I've seen in any game.

The game started how I expected my first game to start with me embarrassing myself. I used Anvil's while the iron is hot push action thing and then proceeded to just start moving models without even thinking if they were in range. It was a silly mistake which luckily Charlie spotted before I did too much more than start measuring.
This was really a game of just hit and hope for my part, I just threw the team into whoever was in range and hoped to do a few wounds. The grand total of this was I took out the mascot and didn't do much else.
The Hunters were on better form getting two goals and two take outs end the game fairly quickly 12-1 to the Hunters.
Once again as with all my games opponent was hugely patient with me and explained everything (sometimes twice as I was a bit tired by this point).

So all games done, loads of fun was had. With my amazing performance I managed to secure last place (only way is up) winning a couple of shinny new dice.

I was really impressed with the tournament and everyone seemed nice and welcoming (I'm sure some of them were idiots law of averages and all that). I learnt plenty during the day not just how my team worked but also things to tighten up when it comes to markers and tracking things too.

Hopefully I'll make it along to another event soon and come somewhere above last, thanks for reading (none of you are still reading).