Bust out the rage...

I realised in all the excitement of doing nothing in particular that I never got around to writing up a post about the Rage bust I had the pleasure of painting. 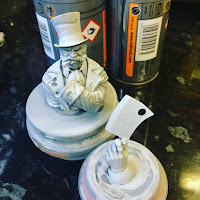 This very cool bust was a gift from my D&D group (I say gift, they say bribe to not drop a dozen angry dragons on them). He's an offical Guild Ball bust produced by BrokenToad who I'm a huge fan of. The bust did take a bit of work to prep, there was a few tabs that needed removing, mould lines and flash to clean but nothing too bad.

Due to the terrible weather i then had to wait patiently (not my strong point) to get the angry fella primed. I kept the hand separate so that I could still get to the areas behind easily.

As with most things I paint I started on the skin, for reference I had a few picture of angry old Italian men saved (my pinterest boards become very focused on whatever my current project is). I try and used a mix of layering, blending, and stippling for skin or larger models as it hopefully gives it a more natural effect. The eye lets it down a bit but later on I got some advice on how to improve it so by the end of the project they look a bit better. 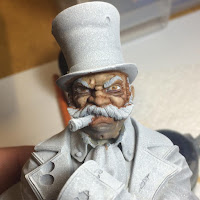 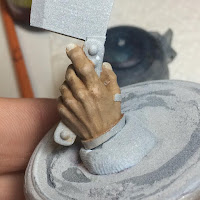 The hair took a few tries as I couldn't find a natural looking grey colour for it. The hat which is such a focal point for Rage I tried to get a velvet-ish effect for it, using various layers of blue. 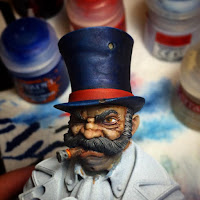 The coat was a fun area to work on as the was a great mix of large areas and creased section to get plenty some life from the colour. The leather cuffs and collars worked better than expected with the stippling giving them a fairly natural worn effect. 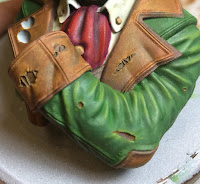 The last project was the cleaver, I wanted a used look for this which meant a bit more work compare to my usual metal technique, once again this meant an unusual pinterest board being created. 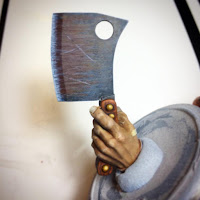 And I think that's Rage all done, one of my favourite projects also seemed to be one of my longest. I learned plenty of lessons to take into my next bust, which I'm itching to find. (a dangerous urge with salute just around the corner)

Shamefully I still don't have a photo of the finished and mounted bust but this is close enough.