Okay so somehow I appear to be back playing Guildball, back in season one I gave it a go with high hopes and good intentions but it never really clicked. All the games I had were fun but also forgettable. I always felt a bit like a spectator to the match instead of a player.

Swing back to now and due to my break up with Malifaux I’ve decided to give it another chance, already season three feels like a better game (based on my two muddled games so far) I’ve jumped in with a new team as then I can partly blame my previous failures on Union instead of myself. 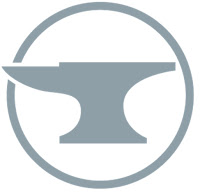 I’ve decided to go with Blacksmiths, not because of their clever play style or anything quite so rational. Instead it was because I’d been practicing my NNM and was looking for something to use it
on. I decided to go with a different look than I’d seen and paint them up in gold effectively making them “Goldsmiths” (... honestly that thought process is the whole reason I’m going back to Guildball, and knowing my luck Steamforged will release a Goldsmith Guild next voiding my genius)

Now I haven’t played enough to offer any sort of tactical analysis of the Goldsmiths so instead my next few post will be mainly about painting the team and also preparing for my first Guildball tournament... oh yeah that’s my other genius plan, to “motivate” me to actually play I’ve signed up to a tournament. (In for a penny, in for a crushing defeat. Like the old saying goes).

So now I have a month to:
Paint a full team (this number keeps growing as I buy more alts) - the fun bit.
Learn what the team does - doubtful.

Practice enough not to embarrass myself - Unlikely but optimistic

Okay one step at a time I’ll run through my painting progress.

Now before I talk about painting the ‘smiths let me talk about the models themselves. Most the sculpts a cool, (except Ferrite I don’t like anything about that model, it’s one redeeming feature is that there is now a rookie alt to replace her) the finish isn't great. There’s a lot of lost and blurry detail along with some very interesting mould lines. But I can easily forgive this, the models were never (to my knowledge) sold as painting projects of display pieces. They are jumped up games counters and with every sculpt being recognisably unique they fill that role perfectly. 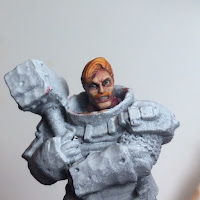 Step one. Zenithal prime, nothing fancy just with two rattle can primers dark first, then light from above. Only thing to keep in mind don’t over prime, the details are already soft you don’t want to drowned them completely.

Step two. Skin, I've used a few different tones across the models but general rules are skin is skin. lighter or darker shades are just different tones within the same range of colours. 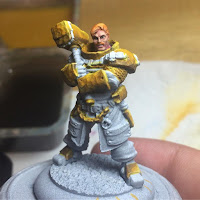 Step three. GOLD! Paint all the gold bits in a watered down mid tone for the gold. Then decide on what’s in shadow, I do a slightly more cartoony version of NMM which basically means high and right is light and everything low and left is dark. So black in bottom left, white in top right, blend toward mid tone gold in the center. Wash with about half as much wash as you think, (thats a general
guide for any painting. Wash less, opposite to when you're gaming where the rule is wash more.) then yellow glaze to brighten it all up a bit.

Step four. Steel, the main job of the steel is to contrast the gold so there is a bit less to it. Dark grey base, light grey edge highlight, and wash. job jobbed. 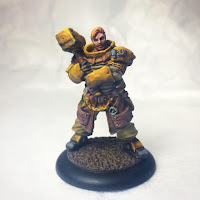 Step five. Paint the fabric and call it done. I didn't go over the top with any of the fabric or leather as I wanted the metals to be the focus.

And thats about it, hopefully the next step will be a write up of a few games.