THERE CAN ONLY BE ONE!!!

So Peter (Dr Walnut) and I had both recently painted up Marcus models and hadn't really had a chance to get them on the table yet, so we decided that a Marcus-off would be a fun way to spend an evening of gaming. With neither of us actually playing Arcanists (yet) though we decided rather than the highly competitive games we normally play (cough cough), we would go for some silly list ideas. Thus Ressur Marcus vs Neverborn Marcus was born. Peter would take a (mostly) Ressur-only list and I would take a (mostly) Neverborn-only list. We both included Henchmen that didn't fit into this category but did fit in thematically.  Without further ado, here are the schemes and the lists. 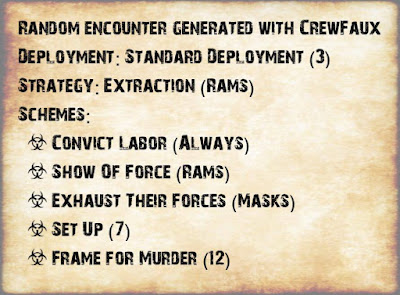 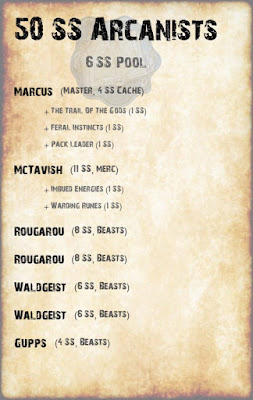 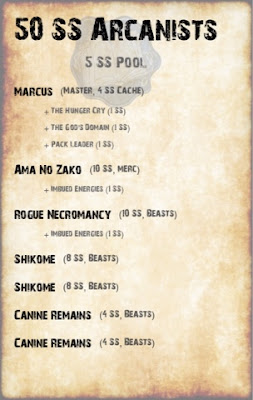 I decided that I could probably keep McTavish safe enough if I played carefully to score at least a couple Show of Force points so I took that and Exhaust. Peter took Exhaust and Leave your Mark, but when he realized it wasn't in the pool (oops!) we decided he could switch it for Convict Labour. This was also my first game trying out the new Rougarou so I was looking forward to that.

Turn One saw both of us start moving our forces forward, but then Peter went hyper aggressive, Alpha-ing and Darzee's Chaunting the Rogue Necro to get it up the board ready for a big turn 1 strike. Unluckily for Peter my waldgeist had dropped a marker for Mctavish to push to and which would have him in range of the RN, so Mctavish went next and dropped 3 shots into the Rogue Necro, taking it below half health, meaning it wouldn't get all the plus flips he had planned on. In revenge the Rogue Necro charged in and did some damage to Mctavish but I used stones and a couple good cards to stop him from being in TOO much trouble. I was worried Frame for Murder was on the Rogue Necro, since Peter clearly threw it to it's death so instead of Marcus beating it to death, I alphad the Rogarou to kill it, since I didn't want to give up 3 points for Frame. Then I used Domesticate and the Rogarou activated, killing the RN with just a (0) thanks to getting two attacks due to Pack Leader. Then I used my 2 ap to charge the Shikome and start doing some damage to it.
I had a lot of models with really good moderate dmg in this crew but only min 2, and I was starting to find all the Hard to Wound very annoying... Turns out Peter did not in fact have Frame for Murder so game stayed 0-0.

Turn 2 Peter won iniative and went with Marcus deciding to try and buff the Shikome, unluckily for him this meant failing a wp duel, which gave my Rogarou the free strike it needed to kill the Shikome (Pack Leader was great this game). Not a ton else happened this turn as we both mostly just needed to walk to get into the Extraction circle. Marcus did get stuck into Ama though, really pumping in some serious damage (doing 6 or 7 after he stoned one of the two attacks). After 2 turns I am up 3-1 thanks to scoring Show of Force with McTavish and getting exhaust on his canine remains with a Rogarou. I also got to move the Marker.

Turn 3 I won initiative and Marcus should be able to easily kill Ama and retreat to safety, pretty much locking up the game for me. I had a pretty great hand too.. and then BAM Marcus Black jokers his horror check. Uhoh.. The worst part of this is he isn't even with 3" of any beasts to use his df trigger on. Also I did manage to get Domesticate off, but Peter having taken the upgrade that gives Marcus + flips was proving to be an excellent choice. Also I would just like to say how HILARIOUSLY powerful domesticate is in a Marcus mirror match. Outside of Ama/McTavish it meant the rest of our crews were often useless.

His Marcus then walked, domesticated, Darzee's chaunted, charged for a one action and started beating on my Marcus, who was now flipping 4 cards and choosing the lowest... ouch. Burned through a bunch of my stones but managed to (barely) survive both Marcus and Ama (think I had 2-4 wounds left after burning through 3 stones...). Luckily for me, Peter didn't really have the cards to cheat in a ton of severes or I was dead.

Both my Rogarou are sitting on 2 wounds with HTK at this point, but the one near the center manages to hitAma and exhaust the Canine Remains (who exhausts him in return). McTavish then unloaded into Ama, taking her down (and still forgetting to burn Imbued Energies...) After 3 turns it's looking pretty good for me as I am up 6-3 and it is looking very unlikely that he is gonna be able to get any for Convict (if Leave your Mark had actually been in the pool he definitely wouldve gotten a couple for it... oh well). 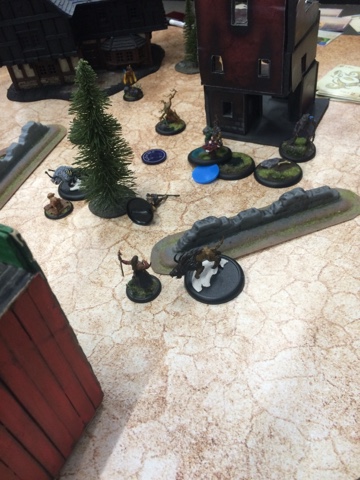 It's not looking good for Evil Marcus at this point, with just a canine remains and shikome left to help him... However he gets the iniative and manages to smack down my Marcus with Ease (thanks Domesticate :P) and then accomplice the Canine Remains to get exhaust on my Rogarou. My Rogarou exhausts Marcus in return and the rest of my crew manages to kill off his Shikome and Canine Remains.

Turn 5 goes by quickly with him scoring his final exhaust point and me maxing out my schemes/strat points. In the end the game ended 10-5 to me with Peter scoring 3vp for Exhaust and 2 for Extraction. Poor scheme choice (mainly choosing a scheme not in the pool) definitely hurt Peter in this game. But man what a blast. Between Domesticate and Darzee's Chaunt the amount of negative flips going on in this game was bonkers. In the end the MVP of the game was McTavish, who stopped the RN from going crazy T1, Killed a Shikome, Ama, and a Canine Remains and scored me 3 vp for Show of Force. What a boss. He was also the only model not on negative flips from Domesticate so that was a big part of it. This game was an absolute blast though, one of the most fun games I've played in ages. Absolute barrel of laughs, and to be fair Peter did get his revenge, beating me in Guildball for the first time immediately after this game.

Now we just need to a game of Arcanist Marcus vs Pig Marcus planned...