So we recently had the first of the bi-monthly hardcore henchman nights at Dark Sphere and I thought I'd do a quick right up of how it went. 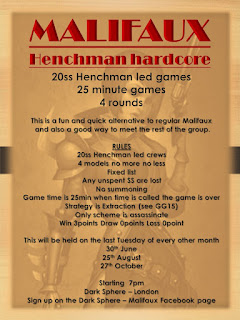 First off for those that don't know henchman hardcore is a mini version of Malifaux, there are a few different tweaks to the rules played but the basic is 20-30min games 20ss henchman led and four models per crew. The strategy is usually turf war (I went for extraction instead but I'll get to that later) and the only scheme is assassinate and finally its close deployment. That gives you the idea, the rules I use are here.


So I went for extraction over turf war as this meant the game wouldn't just stick to a single point. In such a quick game it wouldn't make a huge difference but in third or if quick fourth turn it the marker moving 3 inches could mean someone has to decided weather to go with it or maybe hold their ground and fight.

When I first decided to arrange the hardcore night there was a huge (in context) amount of people keen to play, this dropped slightly as we approached the big night and then with a few drop out on the day I ended up with five player plus me making up the numbers. Six players over four rounds is workable and everyone played someone different each game. I had a couple of new faces both fairly new to the game and both of them doing very well on the night.

So after a few starting hiccups (not my fault for once) we were ready to go. We had crews run by Sidir, Madame Sybelle, Samael, Toshiro, Rusty Alice and Joss.

The rounds went really quick which always catches people of guard at first and also the excuse I'm using not to write up a full report on each game.

After the four rounds there were four players on two wins and two draws. Me on one win and three losses and one player on four losses. So the places came down to VP diff.

The prize was a cheap pack of sweets and nothing else. Everyone seemed to have fun (even me) the only thing that might need tinkering with is the timing as people want an extra five minutes and maybe to start a tiny bit earlier.

All in all a good night, lots of laughs and plastic based death. Looking forward to the next one in August with hopefully even more people.
Posted by Dr Walnut at 12:40:00