Beware the Wrath of Freya!

One thing I've always been very much in favour of in the hobby is the promotion of awesome women in the hobby as a whole, whether they be players, painters, sculptors or all of the above and more I've not thought of. It's why I've been demoing Malifaux at Salute for the last 2 years, trying to get more women engaged and interested in the game and the hobby as a whole.

This year however has seen a bit of a switch - as the stand where I usually demo has decided to run demos of the new game coming out from Wyrd called The Other Side. The models look cool but the cost and the size of the game has precluded me from backing it, which isn't exactly ideal for me trying to sell it to people. So I am (hopefully!) going to be running demos/helping out for the lovely Annie of Bad Squiddo Games. And because Annie is very very awesome, she has also sent me a sneak preview model from her Freya's Wrath Kickstarter.

There have been a number of pictures of a few of the forthcoming models including a very cool looking Fenrir, some badass shieldmaidens to compliment the existing sculpts and even some Norweigan Forest cats which are so cute and fluffy! Well, as fluffy as metal miniatures can be I guess. 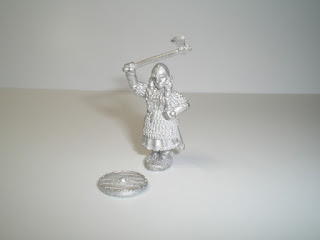 As you can see the shield itself comes seperate from the model which I really appreciate from a painting perspective. Being a large shield it obviously covers a good amount of the torso (which is of course the obvious point of a shield) but that does make it trickier when trying to paint the shieldmaiden herself and leads to a lot of touchups and repaints. So I'm glad that this can be avoided with the seperate shield. It does also mean that if you wanted to do a bit of kitbashing and use a different shield then that's an option that is available. 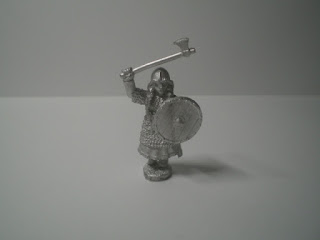 The model itself is really excellent. There was absolutely no flash whatsoever and the mould lines are both minimal and easy to remove if required. I've not been able to get any spray paint on her (stupid weather, stop raining!) but the details look clear and well sculpted. I've had a mini from Annie's own range before, the Raging Annie sculpt, and that looked fantastic after a spray so I have no reason to think that this one would be any different.

The other nice thing about these minis is that they can feasibly be used in multiple systems such as the new edition of Saga, Of Gods And Mortals (especially the wonderfully gruesome model of Hel, Goddess of the Underworld) or even Frostgrave as there are enough spellcaster types to be gang leaders. There are also a number of animals as well which are another key part of Frostgrave.

At the time I'm writing this, the Kickstarter has been live for less than 24 hours and is fully funded. There are some very cool stretch goals being teased from faeries to vignettes and mounted heroines as well.  Personally I'll definitely be pledging for Agna the dwarf heroine (there's a shocker right?!) and then probably a Fenrir or a Hel because I'm a sucker for mythology.

So check it out here Freya's Wrath and buy all the shinies. We're hoping to get Annie herself on the blog to chat about the Kickstarter and other things (probably Guinea Pigs will be involved) so look out for that! I'd also like to include some more pictures of this badass shieldmaiden once she has some paint on her.