Finally getting around to some hobby, which along with everything else seems to have taken a bit of a slump lately.
I had an urge to paint a bust which is fast becoming one of my favourite types of painting to do, and I just so happened to have a box of busts from Salute crying out for some paint. 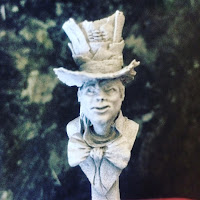 The set is based on Wonderland but slightly more twisted ( or more openly twisted as Alice in wonderland is already pretty dark) they’re advertised as transition busts meaning the scale is a bit more friendly towards painters used to working on minis (I believe?) Check our Broken toads website for a better look and an actual explanation.

First up was the Hatter, who has a face that is really screaming to be the focus of the piece.

So for the face I decided to attempt a theory that I had a half arsed idea about ( I’m a bit of a sponge for new interesting ideas but I have the retention of a rusty sieve so most of what I learn is fifty percent guess work) the idea is an old painters concept which I believe has to do with warmth of tone in the face. Like I said tend to grab hold of ideas not facts so if you want a better idea of the actual details read up don’t trust my recall.
The face has a yellow tone towards the top turning to red and ending in blue, so warm through to cold.

I tried to sketch this out before I started to get an idea if I was heading the right way. 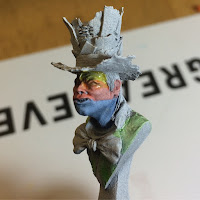 The idea seemed to make some sense and looking back I can see it being helpful with smoother transitions than this, also different feelings being achieved with the warmth being toned up or down.

I went over this up with a basic light flesh tone and was immediately quietly pleased with the effect, the skin already had a more natural look than my past efforts. 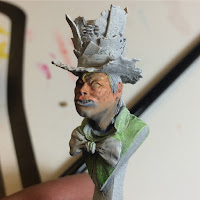 I spent a fair amount of time going over the face trying to bring out all character that I could, there are a lot of cool little angles to the face which meant I could practice trying to get subtler highlights in the right places. 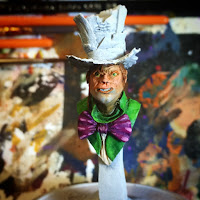 I have to admit that I think I failed on the hair which has been something I’ve struggled with on a few busts, I can’t quite get the balance between a body of hair and individually picked out hairs.

I decided to keep the the body simple, bright but not complex hopefully. The hat on the other hand probably deserved to get some attention.

I really liked the worn patched look of the hat so I tried to show that with various colours looking worn down the layers. To draw a bit of focus to the hat I in a moment of over confidence decided to attempt to free hand some playing cards. 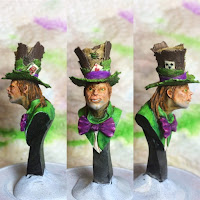 The king and ace were surprisingly straight forward, the five though to several tries to get it looking like a card not just a few black dots. 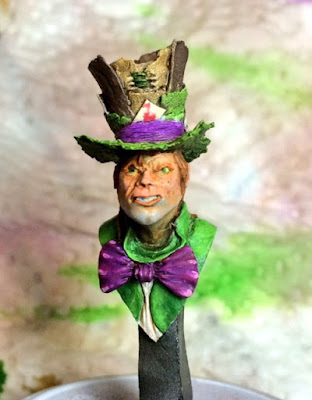 So I think that’s the Hatter done, I’ll tidy up the post when I base them as a set. Which on that note next up is the grinning cat, wish me luck.