Meet me at the crossroad (7)

As anyone who follows me on any social media will know I've recently been painting the Crossroad Seven as a bit of a project. The plan was to tie them in with my Ressers while also making them look a bit different and to push my painting skills.

So I thought I'd give you a quick run down on the seven along with some of the inspirations for them.
When it comes to inspiration for painting I use Pinterest a lot so for anyone who follows me on there and sees the creepy/odd things I post there is a reason for it. 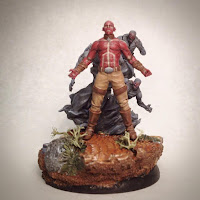 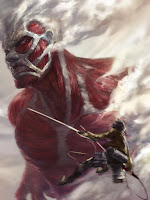 With wrath I wanted something alive and angry to stand out from the zombies of my crews.

I went for a skinless effect as a nod to some angry characters from pop culture and also to make it feel a bit neverborn linking in with dopplegangers look. 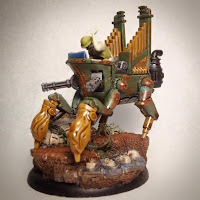 Envy took a bit of time to think of a way to make him resser-ish in the end I went for a ghost in a rusted machine. Partly as an excuse to attempt metals and weathering as someone who has never played anything with mechs it was a nice change. 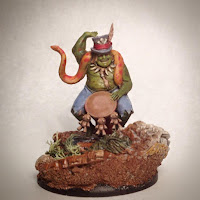 Originally Gluttony was going to be themed on voodoo but I didn't think that was enough of a push or in keeping with the other styles (plus I want to do a whole voodoo marcus project next). So instead I went for a cursed man been turned into a toad. The idea being he'd said the wrong thing to Zoriada and boom. This is quite as resser as it could be but cursed is as good as dead. 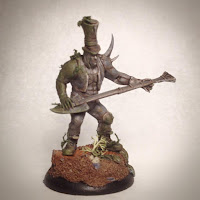 I wanted sloth to be not your usual resser as that would be too easy. So I decided to make him a living statue, something straight out of a cemetery. Painting him to look like stone was trickier than I first thought as you have light and dark areas due to natural process on stone as well as via light source. I added some moss down one side to give him some colour and to show just how slow he is. 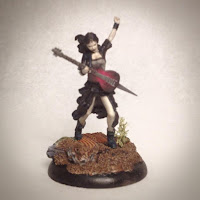 The idea for Greed was a vampire something greedy for blood is still greedy. I was going to add blood effects to the mouth and chin but I sort of chickened out. The guitar was a bit of a bonus as its probably the best looking part of the model and sort of just worked first try.
The grey top is something I'm proud of despite it not photographing well its done with a translucent effect. 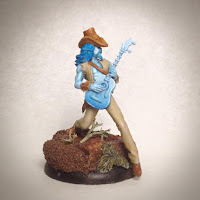 Pride I wanted to be cool, and you can't get much cooler than ice? And I get to use the classic "go out dressed like that you'll catch your death".
Oddly with Pride it took me a while to choose how I wanted him to look despite only giving myself two options fire or ice. But ice won and honestly in a place with as many freak snow storms as Malifaux I'm surprised there aren't more things frozen to death. (Wyrd take note we want frozen zombies, but if you have an action "let it go"...  we'll riot) 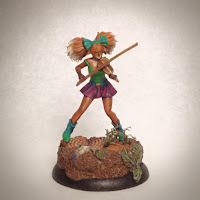 Finally we have Lust, she's based on a fox sort of a were-fox. Also the screeching foxes make is very similar to the sound of a violin.
I really enjoyed painting her as of all of the seven she's the biggest change from the artwork. She's also the model that I can see the most mistakes with but nothing I can't live with.

I'll also leave you with a song that is perfect for the band because I can (so there).