This was the second game of the evening, but both our phones were dead during the first game so we decided to just do a battle report for the second game instead so we could have some pictures. I am still trying to figure out my tournament 8 for my first event at the end of July (there will be an article coming on this) so decided to try out my current idea for a 2 takeout 2 goal lineup.

I went with: Shark, Salt, Jac, Sakana, Gutter and Fangtooth
Ross (@thedicegod on twitter) went with Fillet, Princess, Shank, Boiler, Gutter and Rage
He won the roll off and chose to receive.

Turn 1:
I decided to kick off with Gutter so I could threaten pulling in whoever he went to pick the ball up with. The plan was to drag them in, push them to the edge of the board and have Jac knock them off the pitch. This is my first time trying this on the kick off with Gutter and I definitely screwed it up... Boiler went and grabbed the ball and put marked target on Gutter (making it so she was now in charge range of Fillet). I decided the risk was still worth it so walked her up a bit, chain grabbed boiler, tackled the ball and pushed him twice so he was within an inch of the board edge. Unluckily it meant I had no momentum, but Jac would be able to push Boiler of the pitch on the charge quite easily.

Fillet then charged in (uhoh) and immediately tore Gutter into pieces, putting Ross up 2-0. Damn. With Fillet near the edge of the board as well there as a chance I could charge her and get both Boiler and her off the pitch with Jac, but I decided it was too risky. Instead I charge Boiler, needing 3 4s on 9 dice to knock him off the pitch. ... and I failed. Crap. Now Jac had no momentum (so couldnt use heroic to get him off the board and was standing right by boiler and fillet for next turn.. We both then shuffled around the rest of our players not doing much before Shark decided to try and finish off Boiler. I charge in, rolling 11 dice needing 5 4's to knock him off the pitch and... failed again. Crap! This turn was not going well. I used pretty much all my influence to get him off the pitch and failed. I could have gone after the ball (which was just sitting there) instead and tried to get enough momentum to win iniative, charge rage, bounce and score with shark, but I thought I might be able to do that as well as get boiler off the pitch. Blowing the charge stopped that however. I did at least manage to Gut & String him with that charge though so he was no df 3. I decided to pump in my last remaining 5 influence hoping to get 5 hits with 7 dice (needing 3s now) and finally managed it with my final influence, evening up the score at 2-2. I think we were pretty close on momentum, 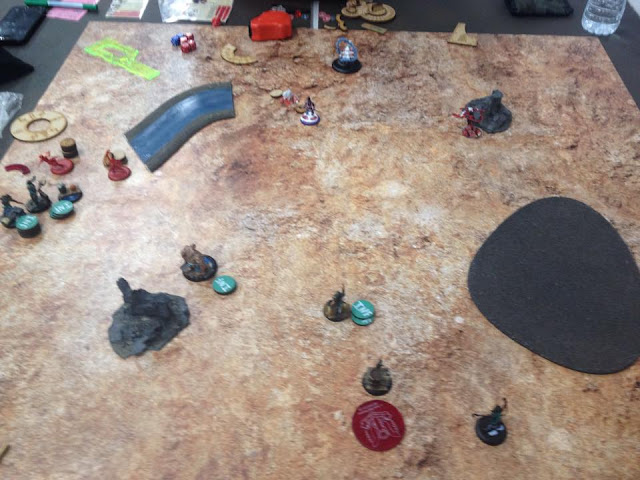 Luckily for me I won the iniative as Fillet looked like she was ready to bad, bad things to Jac and Shark. Ross still stacked up Fillet, seemingly unaware of what was about to happen. I put two on Jac, 6 on Shark and spread the rest around a bit (I also brought Gutter back on). Jac went first, Charged Gutter to make sure to get a point of momentum, I took the momentous play and then used me heroic to knock Fillet off the pitch. 4-2 for Fish and I had just had a massive influence swing, removing 6 influence from play. Shank, Rage, Fish Gutter moved up the board. Butcher Gutter tried to drag Jac away from the board age but missed with her attempts and decided to walk and engage fangtooth instead. My opponent could not get a chain grab off all game. Shark grabbed the ball and used his influence to bounce around, gaining some momentum. Brisket hid at the back (my opponent thought you came on with an icy sponge level of damage from being pushed off the board rather than the health you had when you were pushed off, I told him at this point as I was confused why he was hiding). Finally Sakana charged Shank to get some momentum. 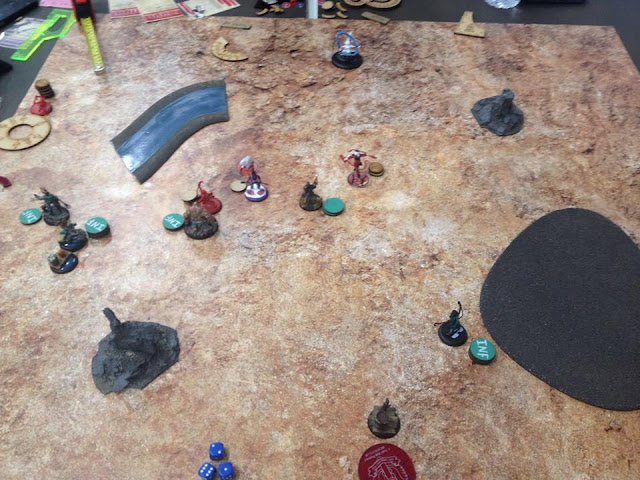 Frustratingly my opponent managed to win the roll off and brought Fillet back on with a 6-stack. She managed to charge in and kill off both Jac and Shark (using the legendary) which cost me about 5 influence. Ouch. Now down 4-6 and two activations. Fangtooth moved around a bit and knocked down both Gutter and Rage. Gutter charged Shank to get me some momentum. Sakana hit Shank to dodge twice and then sprinted towards where the ball had scattered when Shark went down. I think I was down by 1 or 2 momentum. 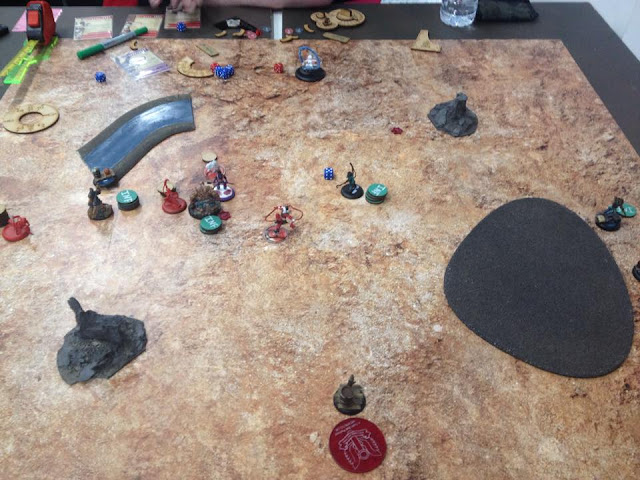 Despite being down on momentum I managed to win iniative! Hazaa! I brought Shark and Jac far to the right flank to keep them safe and put full stacks on Sakana, Gutter and Fangtooth (and one on Shark). Sakanda went first, jogged to grab the ball (hitting the fast terrain) and engaging princess. Hit her 3 times for 3 momentum (and a couple dmg) and then took a bonus-timed shot on goal to make the game 8-6. I had taken the lead again :) He kicked the ball off back to Fillets side of the board. Gutter started beating up on Fangtooth and Fillet came in and finished the job, also passing the ball to Gutter I believe. 8-8. My Gutter then wailed on Shank, taking him down to 3 health. She herself was then killed by Shank and Rage. 8-10... uhoh.  Luckily I had no other easy kills for him as Salt had ran away and been further moved by Jac. I was way down on momentum so used 4 momentum to heal Shark (twice) and Jac. Shark also moved over towards the rock so he would be in a position to do something turn 5 but was also not anywhere near fillet and the danger zone.

Turn 5:
I forgot to take a picture for Turn 5... Oops! Not much happened this turn to be honest. I actually decided to leave Fangtooth and Gutter off since I couldnt bring them in anywhere safe where they could still affect the board and outside Shark and Sakana had nowhere to put influence. So I just went with 6 on Shark and 4 on Sakana. Fillet Charged Sakana but I managed to counter attack and get away (she couldn't get into base) so Sakana would live. Phew. Shark then charged Shank, planning on bouncing around, building momentum and engaging gutter (I wouldnt be able to get to her quick enough to tackle the ball though. Then on the charge I hit the 3 damage column and realised I could kill a fully stacked Shank instead, so I did that. 10-10... wow what a game. It stranded me with 3 inf so I used tidal surge on myself to engage both Rage and Gutter. I decided to pop my legendary as gutter only had 1 influence on her but was in range to walk and shoot to win the game if I didn't hamper her movement. Rage or Gutter managed to knock shark down and rage did some damage to him (but Shark was pretty much full health before that as I healed him again this turn). Sakana had a full stack on him and was engaged with the dog who had 7 health left. I had enough momentum to bonus time a couple attacks. It was a tough choice, turn 4 inf into 4 momentum and win next turn but still have to find a final take out (Even Shark wouldn't be able to score from where he was). Sakana was low health at this point and had bleed on him so would only have about 3 health left for turn 6.. I decided to play it risky and go for the win. I attacked the dog... 1 damage. Crap. Needed to hit 2 dmg on next 3 hits to take her out. bonus-timed second attack: 2 damage! YES! 2 more would do it.. bonus timed second attack (taking me down to 1 mom) and... only 1 damage :( I wouldn't be able to get the damn dog. With my final attack I didn't bonus time and managed to get the 3 hits I needed for 2 dmg taking the dog down to 1 wound. Boiler then walked into charge range of Sakana and spent 2 mom to heal the dog back up to 5 health. We were tied on momentum at this point and he would for sure win the game if he won iniative. I also had a very good chance at winning it, but would require a bit more luck. 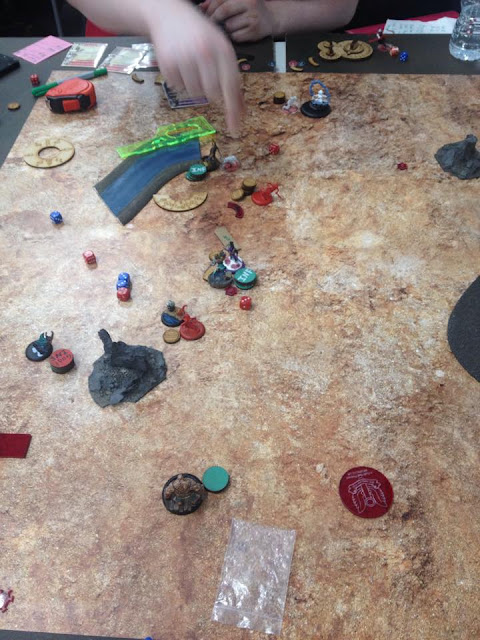 I won the roll off! Initiative rolls were a godsend to me this game. Stacked up Sakana, Shark and put a couple elsewhere. Realistically tho I was losing this game if Sakana didn't kill the dog. This time I just needed to hit the dog 3 times (on 5 dice) once and then just get 1 hit with the other 3 rolls. First attack: 3 hits! I did it! Now I just needed to hit with one dice on each of my next 3 attacks. Which I did. Ending the game 12-10 for me.

Closing Thoughts:
Wow... what a nail biter. I really was on the back foot for a lot of that game, unable to get the ball in good positions and Fillet just tearing my team apart. This was my first ever win with Shark where I didn't score at least 2 goals. Gutter helped weaken Shank, but other than that it was the fishermen players themselves doing it. Fillet is as terrifying as I thought she would be, scoring 4 takeouts on her own. She is just so damn fast. Luckily I managed to keep it close thanks to forcing the action to near the sidelines where I have an advantage. I really, really liked this lineup. It's only the second time I've used it but I definitely want to try it more. I do think I may have been better off with Greyscales in instead of Fangtooth to give me some more speed/ball play, but Fangtooth did tie up Gutter/Rage for a turn before Fillet wiped him out. Tough call. Either way it was an awesome game and probably the closest game of Guildball I've played yet.
Posted by Insidiously Mad at 09:00:00