Like any true romantic, I spent Valentines day with my lovely girlfriend Pippa tick. Unlike most people, we spent a large portion of the day lazing about the house and playing malifaux. Truly a romance of the ages. I decided to try something new out so I declared Gremlins for my first ever game with that faction. Although I was playing a Master I've played 6 games with before, 4 of the 7 models in my crew had never been used by me before (excepting Zoraida, the Nurse and Lazarus). Philippa also decided to try out something new as she took Aionus for the first time. Also this was only my second time using the new schemes so that was interesting. The set up was as follows: 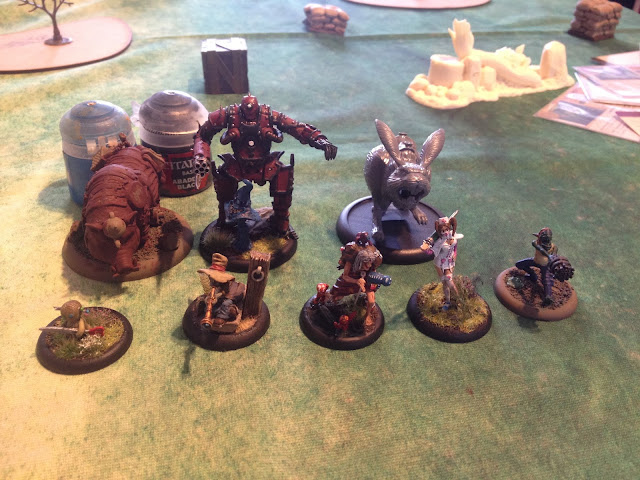 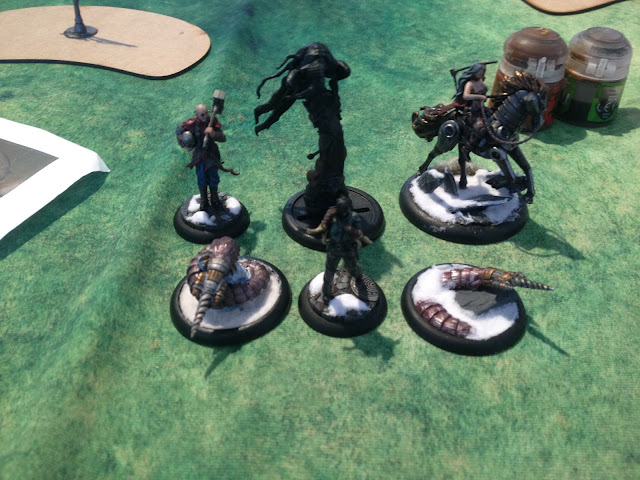 
As the new schemes can not be announced we moved on to set up. I had taken Hunting Party and Inspection and Philippa took Hunting Party and Convict Labour. I thought hunting party could be difficult with only soulstone miners to score against, but there was so much speed and redeployment capability in my list that I thought I could get to them no matter where they dropped in. Below is the game after deployment. My plan was to send up Burt and Gracie on their own to take the left flank and hold that side of the board and send the War Wabbit up the right flank (followed by the bayou gremlin who was gonna hide and hold that side for inspection, with the rest of the crew going up the centre. Philippa put one soulstone miner on her right flank (the other started off the board) with the captain/Ironsides holding the center and Aionus and Mech Rider on the left flank.


On we go to the start of the game!
Turn one I advanced pretty aggressively, the Nurse gave +2 walk to Gracie who pulled Burt up the board. Burt then went Reckless and walked before charging the soulstone miner, softening it up to try and finish it off for Hunting Party on turn 2. Meanwhile Zoraida obey the Wabbit and Lazarus to walk up before walking herself. The Wabbit charged in to Aionus and triggered the free charge into Mech Rider, sadly bouncing it's attacks. Lazarus got pulled in by Ironsides after he walked a bit too far forward getting in position to threaten his stuff next turn. Ironsides punched him getting some Adrenaline. Philippa also got a couple markers down with Aionus and the Miner, but didn't get off Aionus' ability to push them. At the end of turn 1 the soulstone miner came down in charge range of my bayou Gremlin who I was planning on doing Inspection with.

As you can see from the above photo, there was quite a fight in the middle ready for turn 2.


Turn 2 was actually not quite as bloody as I expected, I guess it makes sense with how many tough models philippa had on the board. The turn started with her winning initiative and immediately charging the bayou gremlin with the soulstone miner. I cheated a mask for Squeel, but she killed it on the first hit anyway :( . I then finished off the other soulstone miner with Burt scoring one for hunting party, then took a walk and took a pot shot at the Captain doing 2-3 damage. Aionus, Mech Rider and the Captain combined to kill of the poor War Wabbit before it could really do much. Luckily for me the War Wabbit died to burning from the captain so didn't give up any points for hunting party. Zoraida used Animal Shape to get into position to do the Gremlin's job and score inspection (3rd AP i think I just bewitched Aionus), Gracie did the same thing on the other side of the board as the Nurse started running to take over her spot. At the end of the turn Ironsides and Lazarus beat on each other taking a few wounds off each other. At the end of turn 2 it's tied 2-1 as I scored a point for Hunting Party and a point for inspection, but Philippa got the strategy by killing two minions to my one.

At the start of turn 3 Ironsides continued to beat on Lazarus taking him down to only a few wounds left. In return Lazarus hit her, managing to cheat the red joker for damage on the second attack, taking her down to 1 wound left.

Then the captain charged in and finished off Lazarus. Sadly he never got to shoot his gun once this game :( But he did tie up Ironsides for a few turns and manage to set her up to be killed.
After the death of Lazarus I decided I needed to kill Ironsides to get this game back on track, otherwise I would be down 2-0 on the strategy. But I also wanted to leave that assassination run until the end of the turn. Zoraida held her side and bewitched aionus and the soulstone miner before obeying the miner to walk away so it couldn't get a marker down for Convict Labour. The nurse couldn't get to the left flank to score inspection this turn but I decided I couldnt leave Gracie there any longer so she reactivated herself and walked towards Burt before saddle-ing him to the center of the board. Aionus tried to tie up Burt but couldn't reach him, so instead she charged Gracie taking her down to 2-3 wounds left (Damn ignoring armour!) Aionus also got off his ability this turn, getting two markers into scoring range for Convict Labour. Burt then took a shot at Ironsides, taking her down and securing me the strategy point for the turn. Also Philippa again failed to score Convict labour, being one marker short. Mech Rider tried to shoot Zoraida but she had to walk around the cover so she couldn't focus and the attack missed, leaving her short of markers. This turn I scored one for the strategy to none for Philippa (neither of us got any scheme points), putting me up 3-2.


At the end of the turn 3 it looks like Gracie is in big trouble as Aionus should be able to finish her off if she wins initiative. At least with Ironsides dead we are flipping equally for initiative now.
Turn 4 I managed to win initiative and immediately activated Gracie (who with 3 wounds left needed to go) who failed to kill the Captain. Awesome :P. Philippa then pushed gracie to unengage herself and then ran away (as she didn't want to give up a ton of points for the strategy). Philippa shot Zoraida with Mech Rider to get a couple markers for convict labour done. My Nurse moved up to be in scoring range for Inspection (and hide herself well to continue denying points for Hunting Party, as she was my only minion on the board at this point). Zoraida obeyed Burt Jebsen to get into a good position to shoot the soulstone miner, however she had to stop denying one of the mech riders markers to get in range to do it. She then obeyed Burt to take a shot and with his activation as well I killed off the miner for another hunting party point. At this point Aionus was last to go. If he could kill off Gracie with 3 attacks (needing to hit twice due to hard to kill) it would score philippa a strategy point (instead of me scoring) and score her a point for convict labour, as gracie would no longer be denying one of the markers. Unbenownst to me though, Philippa had no decent cards left in her hand and Aionus missed all three attacks. He also failed to top deck the 10 needed to move around the markers to try and score. This was basically where Philippa's chances of winning the game slipped away in what was a 3vp swing. So I scored for inspection, hunting party, and the strategy this turn, making the score 6-2.

Turn 5 was all about the Aionus show (and the continued quiet dominance of Burt Jebsen). Philippa won iniative this turn and didn't make the same mistake as last turn (where she didn't leave any cards for Aionus to kill Gracie) activating Aionus first and immediately killing Gracie before taking a walk action and using her (other) 0 action to place a scheme marker (I think). Burt Jebsen then went crazy, focusing to shoot the metal gamin in the forest (trying to get my last point for hunting party) and managed to cheat in a severe to kill both the metal gamin and the Captain (with the blasts). Mech Rider then moved up and reactivated Aionus, allowing him to walk and then charge my Nurse, who I had thought was safely hidden.

For her first game using Aionus he was an absolute beast. With better use of her hand Aionus would have done even more and probably scored her at least two more points. This game made me really excited to put Aionus on the board myself, which I hope to do the next time I get down to Dark Sphere for a game. I actually really liked the Ironsides list for collect the bounty and was quite impressed with how it performed. There were no easy points to take and I really had to work for it. Still not convinced on Ironsides herself though... She just doesn't seem QUITE tanky enough to play the way she wants to.

As for my list, I was far too aggressive with Lazarus turn 1 and he didn't have the factor in the game  i was hoping he would. The War Wabbit was a bit disappointing, but did managed to soak up a lot of firepower/attention. Gracie was also quite a good tank and a decent taxi for Burt Jebsen. Zoraida still isn't my favourite master, but she definitely helps you score VP and is very flexible. But really this game was all about Burt Jebsen. In my first ever game with him he killed both soulstone miners, the Captain, Ironsides, and a metal gamin... wow. I mean he has help on Ironsides and the Captain who were already near death, but still. He actually used his gun a lot more than I expected as the knife is really where he shines in a lot of ways, but those blasts/range of the gun came in really handy. He was just fantastic. Not sure he will work as well as a merc cause he REALLY like dirty cheater, and you can't have Gracie saddling him around, but he will definitely be a mainstay of my lists whenever I play Gremlin Zoraida. And I am definitely convinced he is at least worth trying as a merc.

All in all it was a pretty perfect way to spend Valentines Day. :)
Posted by Insidiously Mad at 10:00:00