In the first part of my 2015 tournament review (link) I covered the strategies I played, the masters I used, my Win/Loss records and my VP differentials. In this article I will be looking at my opponents' factions and Masters and my records against them. Obviously the sample size for looking at opponent's masters is far smaller and also heavily influenced by the skill of the player. Therefore this data is not meant to suggest that certain factions/masters are stronger in other, it's more just of interest to see how many different masters I played, how common they were and if any of them gave me trouble. 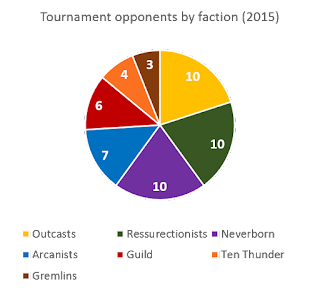 Six months or so into the year I'd barely played against any ressurs competitively and outcasts were running away with first place. However, events in the fall (especially nationals) lead to me facing far more ressurs and neverborn, leading to a three-way tie for my most common opposing faction. I also didn't face Gremlins at all in the early part of the year, before finally getting a few games against them near the end. I was very surprised to see Arcanists right in the middle, since I feel like I play against them a ton. 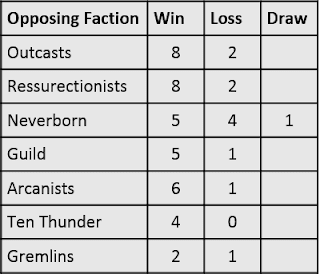 As got my record against various factions, the only faction I didn't lose to was Ten Thunder. I also did very well against two of my most common opposing factions (outcasts and ressurs). I was particularly surprised by how well I did vs Ressurs since there are very few ressur (outside Molly) players in our local meta and I probably know the least about their models of any of the factions outside Gremlins. By far my worst record is against Neverborn, ironic since I was also using them. Clearly I struggle in matchups where I don't have a clear advantage in something (usually speed with neverborn). It may also come down to the fact that I played a LOT of good Neverborn players, and very few new players used them against me. Whereas I faced quite a few new players using Guild and Arcanists. 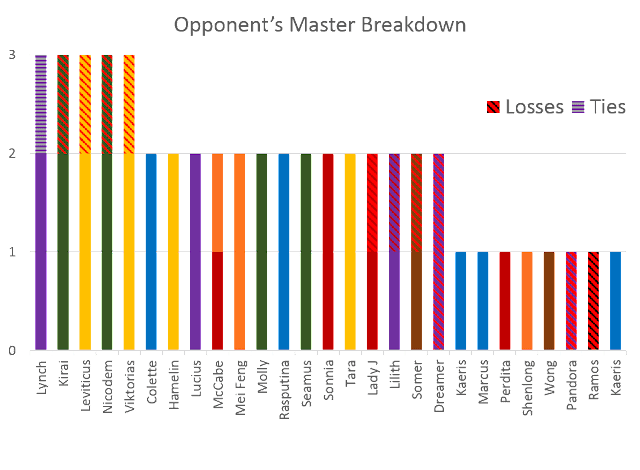 Against the neverborn big 3 I had 1 win and 4 losses. Against every master other than them I had 37 wins, 7 losses and 1 tie. I didn't beat any of the masters I faced 3 times in all 3 games, though I did beat a lot of masters twice. I still don't think I've ever won a game against Dreamer, all of which have been mirror matches.

As to my actual opponents, there were only two players that I faced in a tournament more than twice during 2015. I faced James Reeves a whopping 5 times (6 if you add in the events from 2014). There was only one other player I've faced more than twice in competitive play, which is fellow Dark Sphere local and blog contributor Dave Payne (relaxed Dave). I'd only played him twice for most of the year before drawing him for the first game of nationals. Both guys are fantastic opponents and I have enjoyed all my games vs them, so was happy to get to face them so many times.