2015 Tournament Report: A Year in Review

I was hoping to have this article out at the end of 2015... But it ended up taking longer than I thought it would and I've also been busier than I thought I'd be so oh well. At least it's up now.

Before I go into my 2015 tournament statistical analysis I'd just like to quickly run over 2014 as technically my first two events in Malifaux were in that year.

My first ever Malifaux event was a 8-10 player event, Fools of Fate at Wayland Games. It was a three-rounder fixed-master (I think) event. At the time I only had a very small pool of Nightmares to run. I ended up winning my first two games(Squatters Rights and Turf War) before losing on the top table in the final game to James Reeves in Reckoning. This started two major trends of my 2014 events: 1) Sucking at Reckoning and 2) Facing James Reeves a lot.

My second ever event was also a small event at wayland games (I think 12 players made it that time), In the Name of the Master. This was actually the only event to date I ended with a losing record, as I won my first game (Squatters Rights) before losing my final two in excruciating fashion (Second game was a Dreamer off vs Dave Hill (Reconnoitre) that just went on forever and ended in a 1vp win for him. Final game (Reckoning again) I just didn't see my opponent's model and walked right into a trap. Oops!)

So I ended 2014 with a 3-3 tournament record, having used Dreamer in every game (as I would continue to do for quite a while).

Anyway, now that that stuff is out of the way, let's get to the meat of the article. In 2015 I went to 13 events and played in 50 games in these events. It would have been 51 be I had a first round bye at that event (which counted as a 10-5 win). For the purposes of this article I'm excluding the bye from all statistics. Overall I am really happy with my performance as I won 38 of these games for a win % of 76%. I also only had 1 tie all year which was against Lee Walstow in Reckoning at Summer Showdown.

To break down my record further, here is how I did a the various strategies: For this chart I decided to include the 2014 events to give the strategies a larger sample size (also because my Reckoning record becomes artificially inflated if you ignore the fact that I was 0-2 in it in 2014).

This actually somewhat supported my qualitative experiences in that I have always disliked/struggled in Reckoning and Interference and loved/excelled in Squatters Rights, Headhunter and Stake a Claim (losing my only game of the latter in the final game of Vappfaux to Greg Piskosz). Some surprises were my relatively poor performance in Guard the Stash and my overwhelmingly positive performance in Turf War (again only losing to Greg Piskosz, this time at Nationals. Damn you Greg!)

I did not track schemes or deployment types in 2015 so have no data points or interesting anecdotes about them, however, I am planning on tracking more of this data in 2016 so next year when I right this post it will be a bit more substantial in that area. Too bad that the advent of new schemes won't be able to be compared to the old ones in how often I take a given scheme (especially with the prevalence of breakthrough/protect territory being such an easy choice).

I also have the VPs for 11 of the 13 events I attended (having not done a battle report for and subsequently lost the sheets for Isle of Faux II and Haul of Eggs 3). Excluding those two events I scored a total of 339 VP and gave up a total of 234 VP in 43 games. This makes my average game a 7 to 5 victory. Wow, quite close. For completion's sake my two best wins were a 10-0 win over
Neverborn Lucius in Collect the Bounty at Isle of Faux (not included in the above totals since I didn't right down the other scores of Isle of Faux) and winning the final of Gunsmiths 3 10-0 in Stake a Claim over a Marcus crew to clinch my first ever gaming tournament win. Both times I was (unsurprisingly) using Dreamer. My two worst results were getting destroyed on table two in the final game of LOEH Saturday 1-10 by Graham Allington's Ramos (I was playing Dreamer). That is still my worst loss I've ever suffered in Malifaux, and I was lucky to get 1 vp from LITS to stop the 10-0. My second worst loss was to Joe Wood in the midst of his dominating Kirai run. I lost to him 3-10 in Extraction (Close) in my first event running Lilith.

That actually leads me to the next section of this analysis... what masters I used. Unsurprisingly since I was only playing Dreamer for the first 1/2 of the year he is the dominant choice. Pandora's games are from three tournaments, one fixed-master (4 games), one Wayland event (2 Games) and Nationals (2 Games). Lilith actually only saw playing time in two events, one fixed master (3 games) and Nationals (2 Games). Due to my decision to colour code my faction, this graphic shows that I played every single event as neverborn in 2015 (and 2014). This is going to change in 2016 as I try out more different masters and different factions, so next year's graphic should be far more colourful. 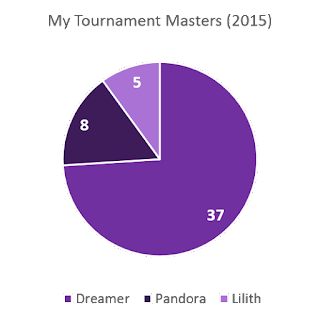 Obviously the sample sizes for Pandora and Lilith are a too small to make any actual judgements on my effectiveness with them compared to Dreamer, but I must say my growing confidence with them (especially Pandora) has me interested to see where I end up by Nationals next year in terms of switching between Masters.

Anyway this post is long enough, so I'll leave the analysis of my opponents masters/factions to another (hopefully shorter) post.

Thanks for reading!
Posted by Insidiously Mad at 10:00:00