Out of commission? Definitely not!

So I've been "gently" reminded by the others that I'm like....contractually obliged to write blog posts or something something eternal damnation playing against Pandora.....I forget the fine print. As it's been a bit quiet on the gaming front for me recently (I went to Snowdown, it was fun and I didn't get the spoon!) I thought I'd share with you guys what I've been doing instead of playing games.

You may or may not be aware of this but I only really started hobbying about 3 years ago at the relatively late age of <mumble mumble>. While I definitely enjoy many different aspects of the hobby, by far and away my favourite part of the hobby is painting. I love seeing a model come together via paint job, trying new things and seeing improvements in the things I paint. It does lead to the problem that my painting pile is getting a *little* excessive, however this doesn't stop me from painting things for other people! I actually really enjoy this, I get to paint models that I otherwise might not be able to and other people tend to pay me for doing it. Usually payment takes the form of shiny toys, thus making everyone happy.

So here is a short roundup of some of the commission projects that I've been doing for other people. 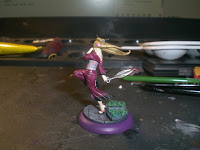 One of our teammates, BadLuck&Blood, has had his hobby time reduced recently due to various circumstances. So I offered to help out by painting a bunch of random models that needed some paint. There was a nice mixture of Outcasts, Ressurectionists and a few 10 Thunders models. There's a long standing joke in our group that Chris is a big fan of pink - so I tried to include that in some of the models where it worked. I also got to try a new technique of making stringy gore using Uhu glue and Tamiya Clear Red paint. This was a bit tricky but I think the end result looked cool. These have been handed back to Chris and I'm looking forward to seeing how he gets on with them. 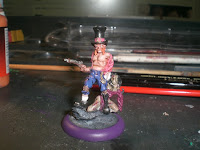 Something a bit different this time - a fellow blogger, Tim (find his blog at http://the-responsible-one.blogspot.co.uk/) as a trade for some Bretonnian transfers I needed for a future project he sent me some teeny tiny fairies to make a couple of little dioramas. This was definitely a first, the figures were smaller than any I've painted so far and so getting detail on some of them proved to be a huge challenge. Also, it was the first time I'd had a proper go at basing multiple figures on one base, definitely a unique challenge that was a lot of fun! 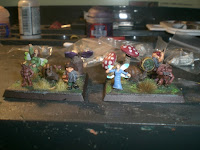 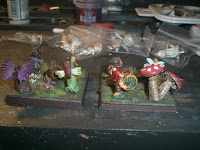 My friend Pete is a big fan of the Batman Miniatures Game for Knight Models. While I've got a fairly sizable Penguin crew and a smaller Ivy crew, it's not something I've had much of a chance to play (plus I also have a bunch of Avengers for the sadly now-defunct Marvel version of this game), I do like the figures a lot. So Pete has been sending batches of Batman miniatures down to me quite regularly for a while now, to the point where I've actually lost count of how many versions of Batman I've painted. Part of me wishes he'd play villain crews, at least it'd be a change from black and very dark grey palette choices! 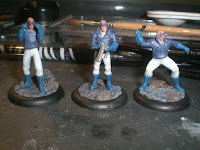 The latest batch have included the Sons of Batmen, a second version of Batfleck and Aaron Cash with his quick response team. Probably my favourite of this bunch to paint though was the armoured Batman from Batman vs Superman, just a really nice mini to paint. Kind of hoping that Wonder Woman from the same set might get sent down here at some point <puppy dog eyes> 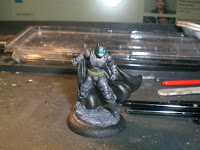 I think out of all the projects I've done recently, I think this is the one I was most pleased with the results. When the artwork for the Titania crew came out from Wyrd last year I was really taken with the models - they looked so cool. But they're Neverborn and I really couldn't justify buying a crew that I knew there was a high chance I wouldn't play. After a chat with Graeme after an event at Wayland we agreed that I'd paint the crew for him and then we could work out some sort of compensation we were both happy with.

The theme for Titania is that she is the Autumn Queen with 3 Knights and a Henchman - 1 for each of the seasons and most of the amazing paint jobs I'd seen on the crew tended to reflect that. However, Graeme and I did a bit of brainstorming and came up with something that, while still keeping the theme, was a little different. While each model was clearly representing it's own season, the colours all tied into an overall autumnal theme - no light greens for spring as an example. For her totem, a fairly massive snake, I suggested to Graeme that I take some inspiration from Disney and paint him like Jafar's snake form from Aladdin (please no sue Mickey!). It was half in jest, but as things turned out, Graeme is a big fan of Disney and loved the idea!

I finally got to hand the crew back to Graeme at the last Warzone event and I was quite pleased to see when I put it on the table along with the best painted entries (I didn't enter it but we decided to have a bit of a joke with Graeme) that it didn't look totally out of place from the lovely entries.

Currently on my painting table I have a Kaeris crew for Ben "Panzer" Harris, which is going to involve me making a wet palette to have a proper go at blending the colour for the flame effects. This is something I've not tried before but have been keen to have a go at for a while so we'll see how it goes. 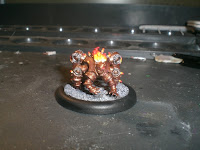 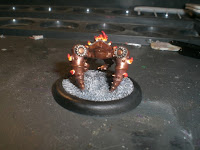 From there it's a bit less certain what I'll be given to paint in the future - I can imagine there'll be more Batman minis from Pete and there was a tentative discussion about me painting a bunch of the upcoming Harry Potter miniatures from Knight Models, which totally hasn't made me squeak with excitement.

If you'd like to keep up with my painting adventures then you can follow me on Twitter (@Elessarion30) as that's where the majority of my work in progress pictures - and don't be afraid to ask me about taking on a small commission, I'm usually happy to help! Although I don't paint Space Marines ;)