So this weekend was my first ever story event. Down to sunny Hockley I went for (another) day at Wayland games.

I was treating the event as a bit of an end of year office party type day, so I loaded up the car with my stupid elf hat and a few Christmas crackers plus an untried or tested crew lead by young Miss Tara.

After a quick breakfast in the cafe (I strongly recommend this a fried food is the key to a long happy life) it was over to Wayland to pull my hat on and stand about talking nonsense for a while.

Game one rolled up and instead of the usual random first round draw this time you had to find someone you've never played and face them.

I ended up playing someone I regularly see at events but never get to play (mainly because we are so far apart in skill, he gets top tables while I get spoons) Mr Joe Wood who shockingly wasn't running Kirai.

The story with this game was that we we're trying to collect parts to build a present. This was
done by picking up randomly placed markers to fit our plans (handed out by TO)

I ran Tara with Anna, a Santa type Aionus and some cooligans. Joe had Collodi with puppets and
things. It started well we both picked up a few markers and then I went charging off into Joe's crew with Tara (not what she's designed for) and Joe calmly picked apart my crew. Didn't collect all my bits to make my present due to everything getting squished.  Really fun game, and great to finally play Joe. 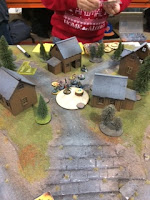 Game two we had to build the present out of the previously collected parts. I didn't quite get all the parts I needed so I had to spend some of my 50ss to buy my missing parts so this game I was playing with 42ss. Each model took hold of a part of the present and we had to drop them into the factory to build your gift. Another great game, this this time against an almost local to me Michael Soar, who despite often playing at the same club we rarely get to play. A slightly miss matched gift swap as between me and Mike, I'd taken a few Christmas crackers along to pull with my opponents, Mike brought along an amazing Roots of Magic model for each of of his opponents (anyone who hasn't seen roots of magic has a Kickstarter finishing soon which is well worth checking out).

This game was Tara vs Viks and surprisingly wasn't a complete bloodbath. We both focused on getting our presents made which following form I didn't quite succeed at. Fun game again and finished in time to sneak off to grab a cup of tea. 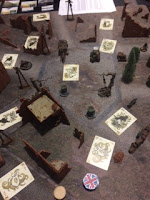 Game 3, I got to play one of the hardest working people in Malifaux, Dave Brown (who you can read about in the current tabletop gamer magazine) There were a few more special rules for this
game, including blind deployment and the shindig rules. The opening turns of this game were great, blind deployment was fun to set up and added a real random element to turn one. We had to deliver presents to the opposition, each present could only be delivered once and each present had to go to a set model. The party was going great up until the black joker appeared meaning party was over no more presents can be delivered. After that me and Dave just danced our models around each other scoring what points we could. The game ended in a draw but with plenty of time left to go and wonder about winding up the people still playing.

That finished up the games, all of them were great with plenty of chat and joking about. Talking of jokes you may remember I mentioned I had a few crackers to pull with the people I played, well I think it's only fair I share at least one of the jokes with you all (also I'm pleased to say all my opponents put on their paper crowns from the crackers as it's not really Christmas if you don't have a paper crown)

Why do cows have bells?

Because their horns don't work!!! 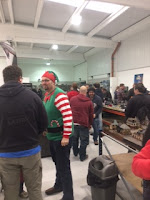 As always I have no clue who won what, specially at this event as there were so many prices. Including gifts in the packs, trophies, raffles and a very impressive Christmas voodoo doll.

Big thanks to Mr Marshall for running it and all my opponents for the fun. If you liked the sound of this event and would have loved to of gone, well tough... actually no not tough in true xmas movie spirit there is a second chance. Mr Dave "the terrain" Brown is running the partner version of this event so head over to the forum to book yourself a place!
Posted by Dr Walnut at 12:24:00