Alas it has been too long since I have had the opportunity to gush about my love for Tara. Work and real life have been getting in the way. That is not to say I have not been getting games in though. After about a year or so of playing with Tara I feel that her and I are starting to click nicely.

Two weeks ago I took Tara along to Crofaux - a 50ss fixed master event at Croydon Gaming club. It was a small event being run by John as a dry run for future events. It was my first time there and it was a great little venue...plus I had a bus that took me basically to the front door so it was super easy. That convenience, the bar and the great crowd mean that I will definitely be back.

So with only 8 players and fixed master it did not take long to find out which masters were there:

This was against Johnny and his Pandora crew. I was dreading facing Pandora, but I figured if there was one strategy to face her in then reconnoiter was the best one. I have very little experience against Pandora so I knew I was going to make mistakes. But what the hell. Recently I have been testing out Tara with Spare Parts, I have not got it quite figured but in reconnoiter it might work.

This is one of the TO pics in turn 1. Bishop, doppleganger and trapper are hiding behind that building. 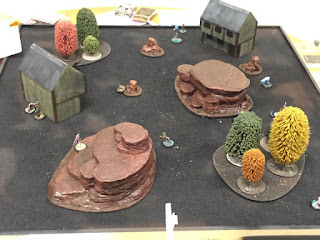 I ran the following:

I learned a hell of a lot in this game. Mostly that Pandora and Candy can hand out far more paralysed than is friendly. Tara was paralysed in both turns 2 and 3. That is far too much AP for a reactivating master to lose out on.

But I stuck to my plan, I had Drowned and Flesh construct head into one quarter to hold with the rest in my other quarter and a void wretch able to hop between. Flesh construct kept Bishop busy for a bit so he could only get over to the main combat in the last turn.The other side involved  a massive melee, which ultimately ended in Hannah seriously bruising Pandora, followed by Karina dropping a punk zombie in her face to finish her off. And Tara sneaking off with a couple of wounds left.

Game ended 9-5 in my favour. I only killed Pandora and ignored the rest. In retrospect I should dealt with Candy sooner. It was a great game against a great opponent. Johnny went on to take 4th place.
Spare parts didn't feature too heavily, but that was mostly due to Tara being kept out of the action.

After chatting to folks in the break I figured I was likely to face off against one of the Lynch players...and I was right. This was against Will and his TT Lynch.

This is one of the TO's photos, I think it is around turn 1 or 2. Most of the TT stuff is hiding behind that building or just off to the left. 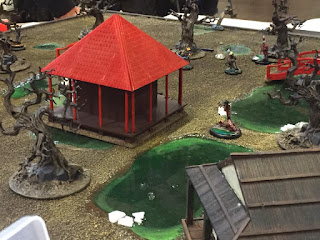 I ran the following:

This is a more common list for me and I am far more confident with it. Lynch was packing Kang (I hate this guy), resurrecting Huggy, Sidir (with some upgrade giving positive flips to models with upgrades - most of them), Yin (snap), Chiaki and a samurai (upgrade to avoid wounding itself).
I chose protect territory and outflank. Will went for entourage (on Huggy) and protect territory. All schemes were announced.

This was an insanely tight game. Kang and Sidir were giving their friends so many positive flips Will was flying through his deck. In turn 1 I pulled Huggy right over and the Nothing Beast fluffed all of his attacks. He made up for it in turn 2 by walloping Huggy right off the board. At this point I contemplated moving the Beast back and regrouping or going aggressive. I went aggressive and realised it was the wrong move. Lynch managed to remove the beast and replace him with a new Huggy. The centre of the board was a bloodbath. The highlight was Will getting Sybelle down to 2 wounds. Tara buried her and a void wretch healed her with red joker. Kang killed Tara and then had to face Sybelle again. Sybelle with her bleeder lash kept destroying Will's hand. Ultimately my middle collapsed and Will picked up a few more points there. But he cocked up protect territory and didn't score off that giving us a 7-7 game (should have been 9-7 to Will though).

I think by being less aggressive with the Nothing Beast I would have held my centre better and it would have taken longer for Lynch to get another Huggy (with entourage) on the board. But lesson learned against Lynch.

Going into the final round we both had a decent chance to take it. We knew that Andreas had won both his games with Lynch though.

My VP differential was slightly better than Will's so I faced Andreas' Lynch. Yay, another Lynch! Will was facing off against Bad Luck & Blood's Mei Feng. 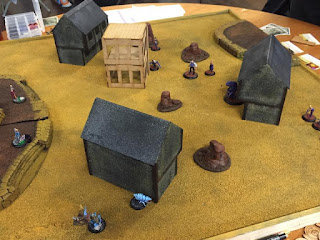 This is turn 1 Tara is towards the middle behind the building and I have some buried nasties.

Before this game I had only tried Killjoy out twice but figured Reckoning would be good for him. Andreas was packing Lynch, resurrecting Huggy (looking familiar), 2 x illuminated, 2 x beckoners, Mr Graves

I elected break through and here I really pondered and eventually went with Frame for Murder on Nothing Beast (between Lynch and Huggy he should go down easily). Tara made the belles fast and shuffled up the board. Killjoy began buried and the marshal shoved the Nothing Beast into a box. Once Huggy drifted too far forward the belles brought him into my face. Tara dropped out the Nothing Beast and threw out the fast pulse. The Nothing Beast took 2 focused swings and the Hungering Darkness was no more.

Turn 2 was where Andreas showed what a forgiving opponent he was. Tara won the initiative walked forward dropped Killjoy and handed him fast. Killjoy got to act immediately and charged Lynch with 1 AP. With Decaying aura he rammed Lynches face into the dirt and it became my game to lose. Killjoy was still looking pretty with 1 AP left. Although Lynch did have frame for murder on him, handing out a bit of VP to Andreas.

From that point on Andreas tried to get some VP off Killjoy and the belles. Killjoy just managed to survive a Graves onslaught and killed some minor models to get some healing going. But he completely ignored the nothing beast meaning I could not score anything off my one scheme.
The game ended 4-2 in my favour - Andreas did a good job of limiting my Reckoning opportunities. I am going to avoid frame for murder in the future as you just cannot control it and in 3 games I have only got it to work once.

Andreas went on to take 3rd place. Will won his game so it was one of us that would make it. Turns out he won his 3rd game 9-5 (matching my first game). But he won his 1st game with more VP than I won my 3rd. So he took 1st place beating me by 2 VP.

All in all it was a great day with 3 absolutely fantastic opponents and games. I was really pleased taking second place and even more pleased that I had faced the other 3 players in the top 4 and held my own quite well.

Looking forward to Dark Faux and the next tounament at Croydon whenever it may be.