The Real Cost Of Getting In To Malifaux

Malifaux is credited with being one of the cheapest miniature games to get in to with a suggested cost of 1 boxed crew and rule book. Realistically though there are a number of things that a new player will want to buy to get the fullest experience.

Malifaux is one of the simpler war games to learn the rules of, however that doesn't mean that you're not going to need to refer back to rule book to settle a dispute or if you want to look up what is and isn't possible to do. Malifaux is great in this regard as it comes with two options for rule books, the full version which has information for all of the models available at the time of print (1st wave) and a smaller, cheaper rule book which simply contains everything you need to play.

Additionally M2E offers the option for an additional book (though likely to get more later) which contain the stat cards for all the models in their line, current and planned. Both this book and the full rules manual offer a good way for players who want to enter the competitive scene to understand the models that they will be playing against, even if they only buy a few models or only one faction. If however you intend to only play with a small group, one rules manual will be sufficient for any number of players. 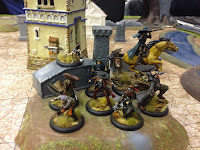 It should go without saying that you will need miniatures to play with. Whilst you do not strictly need to buy official miniatures for casual play, tournament play requires that the model be identifiable and although they allow for customisation, that does mean you will want to get the official releases.


The most cost effective way to do this currently is via the crew boxes. Crew boxes provide a Leader model (head of your crew) and supplementary characters that complement them. Most boxes contain 5-6 models and enable you to create a crew of around 40SS (soulstones, aka 'points'). Standard rules and tournaments are usually 50SS and as such you'll want to get additional models in order to play. This is also important as the game is balanced for 50SS; more or less can leave some factions or crews at a large advantage/disadvantage.

As with any miniatures game the more models you have the more options you have but this is especially true in Malifaux. As every game can be 1 of 5 different strategies and 19 different schemes, a one-size-fits-all crew is very difficult to achieve. This is doubly the case for lower SS games as many of the boxed crews only contain higher cost models, leaving the 3SS to 5SS range models out. Only being able to field 3 models in a 25SS game will mean you are very quickly outgunned/outmaneuvered.

The good news is that there is already a number of 'boosters' that can help you get the support models that you need and generally you won't need more than 2 to have a good spread of SS costs for playing with. More practically however you will want 4 or 5 different boxes in order to have options, especially if you want to be competitive.

An example of how I have started with the game is: The Latigo Posse, Guild Riflemen, Death Marshals, Guild Guard, Executioners, The Lone Marshal, Guild Pathfinder.

Should I never get another model (I will), I have more than enough different ways to get to 50SS depending on the schemes and straegies that I want to employ. The Guild (faction) in general is quite 'shooty', especially The Latigo Posse, so other factions and crews may need slightly less if they are good at schemes.

While you will probably enjoy playing with just 1 crew box, the game only begins to reveal itself when you have choices, so I would say that you definitely need more.

While I hesitate to say that a Fate Deck is a 'need' for Malifaux (a standard deck of cards with 2 jokers would suffice), there is no way that you would want to play without one and remembering which suit is which (Hearts = Rams, Clubs = Tomes, Diamonds = Masks, Spades = Crows) gets boring very quickly. 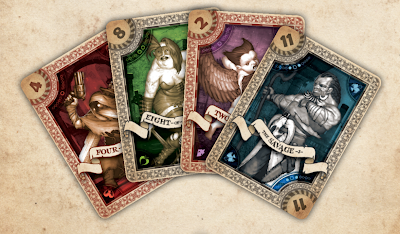 Luckily Fate Decks are quite cheap and the new ones are made of plastic which means that you won't really need to sleeve them either.

One thing that Mailfaux needs that is not immediately obvious are tokens. Tokens are used to represent a great number of things and there is surprisingly no official option for players who want to buy them.

There are approximately 1,000,000 (maybe less) different things you need tokens for in Malifaux but luckily they are all simply 30mm, 40mm, 50mm, or multiples thereof. This means that you can quite easily use some spare bases if you have any or pick them up quite cheaply and Wyrd actually sell coloured bases which can be used as markers quite cheaply. 1 box of each should suffice.

Malifaux is a freeform tabletop miniatures game that doesn't use grids or hexes for movement but a more traditional inch based system (why aren't we using metric yet?). Unless you have a tiny little trundle wheel you are going to need a tape measure or at least a lengthy bendy ruler in order to play. There's no special requirements so raiding your dad's tool box (what do you mean you're in your 30s and don't have a tape measure?) or getting one out of a Christmas cracker is perfectly adequate.

THINGS YOU KIND OF NEED

More than many miniatures games Malifaux requires scenery to work. That said, if your imagination is good then you already have all the scenery you need. Well crafted, thematic, appropriately sized scenery is great and can really add to both the tactics of the game and immersion but really anything will suffice from a book, to your empty Fate Deck box, to a tin of beans tower. 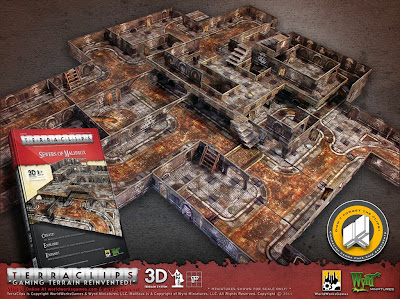 If you play a lot at home you will probably want to buy some walls and buildings to shoot around but most wargame clubs will have boxes of the stuff that you can use. These can vary in price a lot, so if this is your first wargame expect this to be expensive to get right at home, or else expect to get creative - http://www.pinterest.com/drwalnut/malifaux-table-ideas/

All the stat cards in Malifaux are designed to be wiped clean from dry markers. This is useful because wounds can be marked directly on to the cards. This is also handy for noting status ailments/bonuses.

Being aware of what schemes you have chosen, when points have been scored, and what turn you are on are all very important for playing. A notepad and pen to make a record of all of these will be more than useful.

As you might be aware Malifaux miniatures require assembly. This involves clipping the from sprues, trimming what little flash they have, and gluing them together. If you don't have wire clippers and craft knife and either some glue or polystrene cement then you will have to get some.

While bases will do, there are some options available to players who want tokens that are a little more obvious.

Counter Attack Bases doa complete 'Victorian Horror' token set, although it will cost you nearly as much as a new crew - http://www.counterattackbases.co.uk/general-counter-set-2nd-edition

Unless you are planning on buying every model for your faction you are going to miss out on the cards for some of the upgrades. Arsenal packs will give you the cards that you are missing as well as let you look at the options for what to buy next (assuming you haven't bought the big rule book and Crossroads). Even if you later buy the model you can always give the cards to your opponent so they know what your guys do.

If you have to travel to play then you don't want your models to get damaged in transit. There are a lot of different case companies that can provide protection for your miniatures while you carry them to your games. Some good ones include - http://www.krmulticase.com/ - and - http://uk.battlefoam.com/

When marking out a 3' x 3' play area can be difficult to keep track of the edges/deployment zones/middles, which is why a play mat is a good option for quicker set up and measurements. Several companies offer mats, including custom designs but one of the better ones is Deep Cut Studios - http://www.deepcutstudio.com/

They have a number of suitably themed 3' x 3' mats and can also custom make one for you. Depending on the complexity a small modification could be as little as £10 (such as marking out the deployment areas) or a full custom mat could run a few hundred pounds.

The models for Malifaux are intricate and superbly detailed, you can easily play with them without painting and have them look amazing. For tournaments however you have to have your models painted, but by no means does it have to be professional. While painting may seem intimidating at first, a steady hand some practise is all you need to achieve good results. Paints costs around £2 per pot and depending on your crew you could paint them with as little as 5 pots.

We'll cover painting models in future articles but don't be surprised if you come to enjoy painting almost as much as playing and if you don't then there are dozens of miniature painting services easily findable online.

Perhaps not one for you but it's a great way to keep the kids busy while you assemble, paint and play with your miniatures. 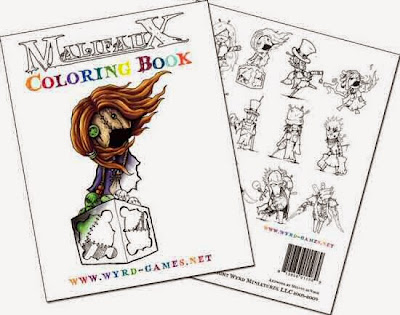 SO, HOW MUCH IS IT REALLY THEN?

Only including the essentials and assuming you start with nothing